The Limits of Control: A Deeper Look into THE HOBBIT’s Worldview 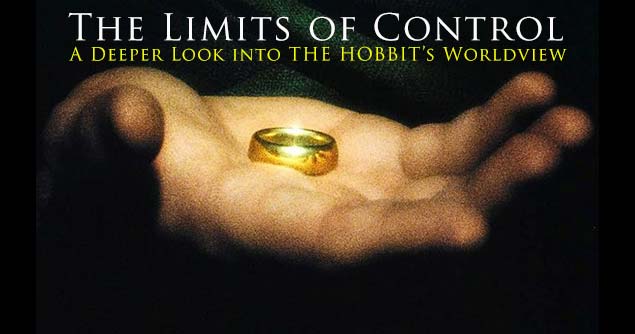 Boromir, in the movie THE FELLOWSHIP OF THE RING (2001), muses that “it is a strange fate that we should suffer so much fear and doubt over so small a thing. Such a little thing.” With the release of the second installment of Peter Jackson’s retelling of J.R.R Tolkein’s THE HOBBIT, with its dramatic action sequences, and its epic settings, it is more essential than ever to remind ourselves of the smaller things representing the core of Tolkein’s whole enterprise. Whether it be seven companions, a lesser wizard, Halflings, Gollum, or the One Ring itself, the large and empty spaces that surround the journeys of these characters seems to press in and emphasize the singularly inner and personal nature of the fate and doom of Middle-Earth. Chance encounters, fortunate falls, simple wisdom, poetry, and song seem to triumph over the cunning, strength, numbers, and mechanisms of the great and powerful. In fact, it is in the forgotten character of Tom Bombadil, that the great antithesis to the notions of progress and control represented by the One Ring is most emphasized by Tolkein.

The forging of the One Ring coincides with the creation of many rings. These rings were made for a seemingly good purpose, that of increasing the utility and power of the Kings of Men, Dwarves, and Elves to preserve and sustain their way of life; to hold at bay the failing of the world. Sauron’s secret forging of a master ring is the tragic incarnation of the wrongness of this approach. Ironically, this ring is not only the undoing of Sauron himself, but of the power of the remaining rings held by Galadrial, Elrond, and Gandalf. The point of Tolkien, I will argue, is not that good must triumph over evil through great power, but that the very philosophy of control and utility ultimately brings about its own destruction through its ignorance of the nature of true power. If the One Ring is the incarnation of the desire of both good and evil to be “lords” over time, nature, and life, the ignored and mysterious character of Tom Bombidil is the personification of true “mastery” rooted in harmony and a true understanding of the nature of things.

First, let’s re-introduce ourselves to this character. In the book THE FELLOWSHIP OF THE RING, the Hobbits meet Tom Bombadil in a moment of extreme need; both Merry and Pippen have been swallowed whole by a tree. Tom appears, dressed in a feathered cap, blue coat, and yellow boots singing what seems to be nonsense:

Ring a dong! hop along! fal lal the willow!

He identifies the perpetrating tree as the rotten-hearted Old Man Willow, but comforts them that this predicament is easily mended as “I know the tune of him.” He promptly sings them free, and sends the tree into sleep. In response to their queries as to if he had heard them call for help, he replied that – as he was singing at the time – he had not heard them, but had come upon them by chance “if chance you call it.” He will save the Hobbits again from the Barrow-Wights when summoned by a song he taught them. Though mysterious, claiming to have been in Middle-Earth before Elves, trees, or even before the “Dark Lord came in from Outside,” he is the only character of the books that isn’t tempted by the One Ring. “Show me this precious ring,” he asks Frodo, and promptly makes it disappear, then tosses it back to Frodo dismissively. Frodo, a bit annoyed by Tom’s flippancy and suspecting a trick, tries to sneak away wearing it, but Tom seems unaffected by the invisibility powers of the ring as well, much to Frodo’s surprise. Later, at the council of Elrond, it is asked why Tom was not beckoned, and why he could not carry or conceal the ring himself as he seemed to have power over it. Gandalf replies, “No, I should not put it so. . . say rather that the Ring has no power over him. He is his own master. And, if he were given the Ring, he would soon forget it, or most likely throw it away.” The Elf-lord Glorfindel adds, in answering the question further as to whether Tom could protect and conceal the Ring within his forest, “I think not. I think that in the end, if all else is conquered, Bombadil will fall, Last as he was First; and then Night will come.” Though Tom Bombadil cannot be the solution to the crisis that faced the free-peoples of Middle-Earth, he stands as a symbolic reminder that not all things lie beneath the shadow of its power.

To understand more deeply the importance of Tom to Tolkein’s whole enterprise, we must understand his title of “Master.” In a remarkable interchange between Frodo and Tom’s wife Goldberry, much is revealed as to the nature of this mysterious title:

“Fair lady!” said Frodo again after a while. “Tell me, if my asking does not seem foolish, who is Tom Bombadil?”

“He is,” said Goldberry, staying her swift movements and smiling.

Frodo looked at her questioningly. “He is, as you have seen him,” she said in answer to his look. “He is the Master of wood, water, and hill.”

“Then all this land belongs to him?”

“No indeed!” she answered, and her smile faded. “That would indeed be a burden,” she added in a low voice, as if to herself. “The tree and the grasses and all things growing or living in the land belong each to themselves. Tom Bombadil is the Master. No one has ever caught old Tom walking in the forest, wading in the water, leaping on the hill-tops under light and shadow. He has no fear. Tom Bombadil is master.”

Tom, in being “the master,” bears no burden or ownership or control. His power is in his freedom, and knowing the tune or song for everything. Just as Tolkein’s universe was created by Illuvatar, the “father of all,” through the songs of the Valar, so Tom and many other characters within Middle-earth sing as a revelation of true power rooted in the very nature of things. Poetry seems to be at the heart of courtesy, light, and laughter in THE LORD OF THE RINGS while being noticeably absent in any place of darkness. Though Sam, Frodo, Aragorn, and many others sing in Elvish, Tom’s songs are onomatopoetic (words that sound like what they represent), and far from being nonsensical, seem to be at point where language and sound become one. Tom is a being of contentment and song, who is so far from possessing anything that nothing possesses him. In a universe where snares, webs, prisons, malice, and corrupting knowledge and power abound, Tom stands as the personification of natural mastery rooted in the knowing, but not in the possessing, of things and beings. He is no lord; he is master.

Immediately, upon hearing of this title, we are conscious of a contrast between the concept of Master and Lord. “Nothing is evil in the beginning,” said Elrond of both Saruman and Sauron, “as long as [the Ring] is in the world it will be a danger even to the Wise.” It is clear from the Council of Elrond that the “Master” will care nothing for it, but any who desire to use it, even for good, will either be suborned by the true Lord of the Rings or will simply become “another Dark Lord.” Though nothing is evil in the beginning, according to Elrond, the Ring itself is “altogether evil.” Within the Ring is much of Sauron himself: his power, his malice, his will to rule. Like all things that turn evil, mad, or weak in the Tolkien universe, the desire for control or possession seems at its root. Elves that shut themselves off from the world; Dwarves that hoard its riches; or, men that seek to preserve their power or life: all find that control cannot preserve life, provide fulfillment, or prevent disaster. Those that bear the One Ring are scarred by its “burden” and are marked by restlessness and darkness all their unnaturally long lives. Unless they give it up quickly enough, the monstrousness and addiction to control is manifested in their bodies and split personalities, like that of Gollum. The peace of Tom Bombadil’s house, his centered self, his songs, and his mercy speak to the mastery that he represents.

In THE LORD OF THE RINGS, the One Ring’s incarnation of the concepts of lordship and control are contrasted with the personification of mastery and freedom in the character of Tom Bombadil, revealing Tolkien’s mythic warning against any who, in seeking control, lose both themselves and the world. Indeed, at the core of the mythic enterprise of Tolkien, Dorothy Sayers, C.S Lewis, and many others of their time was a warning against holding progress over permanence, of utility over nature, of control over harmony, of information over virtue, of certainty over courage, of rationality over faith and reason. A world obsessed with method and technique without recourse to the nature of a thing, and therefore ignorant of ultimate ends, or current harm. I will not specify how these ideas apply today, though of course they do. I will simply ask that each lover of truth and goodness think carefully about how what has been presented may affect our thoughts about such things as marriage, the environment, education, church organizations, media, government, international relations, business, parenthood, dating, and family, etc. Natural harmony is central to a life of freedom, as Tolkien knew well. His warning is found most clearly in the deeply inculcated though, granted, provincial wisdom of the Hobbits who exclaim, “it will have to be paid for. . . it isn’t natural, and trouble will come of it.”