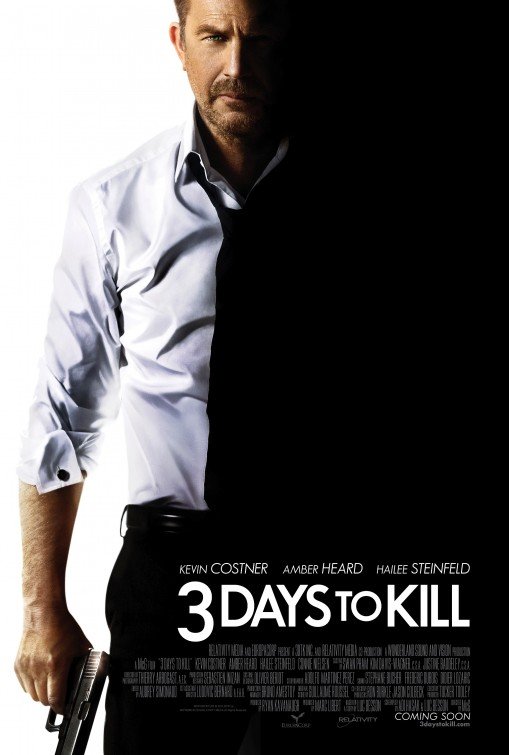 3 DAYS TO KILL stars Kevin Costner as CIA spy Ethan Renner. Ethan is chasing a dirty-nuke bomb smuggler named The Wolf and his evil sidekick. The chase leads to Paris, where the smugglers are selling a dirty bomb to rogue Syrians. When an opening showdown fails, Ethan is rocked with convulsive headaches and flashbacks. He wakes in a hospital to learn he has brain cancer, which has spread to his lungs. Given an experimental drug to keep him alive, he has three days to stop The Wolf and reconcile with his rebellious teenager daughter and ex-wife.

3 DAYS TO KILL is that rare action movie that isn’t afraid to slow down and take a breath at unexpected moments. There are funny chases and fights where both Ethan and his nemeses are injured but keep struggling. What makes this movie are the beautifully shot moments where Ethan bonds with his daughter. Thus, the movie has a moral, redemptive worldview. However, 3 DAYS TO KILL has some brief lewd moments, strong foul language, and frequent, intense action violence; so, extreme caution is advised.

(BB, C, PP, Ro, Pa, Ho, LL, VV, S, N, A, DD, MM) Strong moral worldview with some Christian, redemptive elements includes a positive view of Christmas and family, reconciling with family members, forgiveness, and an American spy stopping nuclear smugglers/terrorists, mitigated by some Romantic, pagan elements such as bad guys engaging in ruthless behavior and some possible moral relativism when hero has to adopt an anything-goes approach at times in the name of justice and protecting the innocent, plus a light homosexual joke is made by henchman about hero; 12 obscenities (including two “f” words, one subtitled), four strong profanities, and two light profanities, plus sick man has nosebleeds; strong, intense action violence with some blood includes multiple shootouts, explosions, car chases, hand–to-hand combat that involves punching and kicking and choking, hero shocks captured villain with electricity, and an evildoer forces a female US agent’s head into an elevator shaft, with the implication that it gets snapped off or crushed by a descending elevator car; some sexual content includes it’s implied a formerly married couple has sexual relations after reconciling, hero has to look for his teenage daughter in a dance club after she lied to him about where she was going for the evening, and he finds her about to be assaulted by boys in the bathroom who have drugged her, and he proceeds to beat them up, and implied topless dancer at a club who’s obscured by smoke; he found out she’s at a dance club. Costner takes a good quick look at a couple of heavy-kissing couples outside before finding her about to be ganged up on by boys in the bathroom, and he proceeds to beat them up, naked woman at tattoo parlor shown from behind, and implied topless dancers whose nudity is obscured by a smoke machine; rear female nudity at tattoo party, female cleavage, and implied topless dancer but nothing explicit shown; alcohol use, and man is told he has to swig vodka to overcome effects of experimental anti-cancer drug; smoking and teenager drugged at rave party but father rescues her; and, rebellious teenager but she learns some lessons, lying, hero breaks some rules to achieve some goals, tattoos shown when hero looks for his daughter in tattoo parlor, daughter lies to father (once to get his approval), but she admits she “lies all the time.”

3 DAYS TO KILL is a thoroughly entertaining, surprisingly touching story of a CIA agent/assassin who learns he has terminal cancer and tries to restore his relationship with his estranged wife and teenage daughter while being forced into one last mission. Rated PG-13, 3 DAYS TO KILL has a strong moral worldview with some strong pagan undertones stemming from the bad guys engaging in ruthless behavior and the hero having to adopt an anything-goes approach at times in the name of justice.

The movie’s story follows CIA spy Ethan Renner (Kevin Costner), who’s chasing a dirty-nuke bomb smuggler named The Wolf and his sidekick named The Albino. The chase leads to Paris, where the smugglers are about to sell a dirty bomb to rogue Syrians. Ethan is under the direction of a young female agent named Vivi (Anne Heard), who doesn’t know what The Wolf looks like in close up and thus needs Ethan to do the killing or capture him.

When an opening showdown goes awry, Ethan is rocked with convulsive headaches and flashbacks. He wakes in a hospital to learn he has brain cancer, which has spread to his lungs, giving him a persistent cough. His CIA boss tells him he won’t live to see the next Christmas. So, Ethan is set free to get his affairs in order. In Ethan’s case, this means making peace with his ex-wife (Connie Nielsen) and his daughter Zooey (Hailee Steinfeld from TRUE GRIT) after being a terribly distant husband and father.

However, Ethan’s ex-wife has one condition: He must retire. He promises her he is, but just then Vivi reappears to give him an offer he literally can’t refuse. If Ethan will take down The Wolf within the next three days, she’ll arrange a million-dollar life insurance policy for him that will take care of his family when he dies. She’ll also give him access to a highly experimental drug that can greatly increase his lifespan. Thus begins an impressively entertaining tightrope act between Ethan’s parental responsibilities (his ex has left him in charge of Zooey for the three-day weekend) and his need to save the world.

It would be easy for one-name director McG, who’s built most of his career on flashy but empty movies like CHARLIE’S ANGELS and THIS IS WAR, and writers Luc Besson and Adi Hasak, to take the low road and just deliver another clichéd take on the work versus home life of a spy. Instead, they pull off something far greater here. They bring new life to a hackneyed formula by taking things in the other direction and being serious about their plot. Costner plays his role at full tilt. He’s an action hero when he needs to be, funny when a little burst of humor is needed, and downright terrific in both confronting Ethan’s mortality and a lifetime of regrets.

3 DAYS TO KILL is that rare action movie that isn’t afraid to slow down and take a breath at unexpected moments. There are surprisingly funny chases and fights in which both Ethan and his nemeses are injured but keep struggling to get the upper hand. What makes this movie a keeper, though, are the beautifully shot moments where Ethan teaches Zooey to ride a bike or dance for the first time. In these moments, 3 DAYS TO KILL also shows that it has a deeper message about family and forgiveness and appreciating the fleeting moments of a good life.

3 DAYS TO A KILL also has a touching subplot where Ethan allows a homeless family of apartment squatters stay in his apartment until their daughter gives birth rather than throwing them out. The subplot results in a touching birth scene that’s among the movie’s many beautifully drawn moments. Finally, the prime concern Ethan has is to stay alive for Christmas to be with his family. That, and a plea for forgiveness from his wife and daughter, gives the movie a positive Christian theme.

Extreme caution is recommended, however, for some off-color moments and strong violence. In one scene, for example, a random couple is seen kissing passionately outside a club. Another scene has implied topless dancers onstage for about ten seconds, but their nudity’s obscured from the effects of a fog machine. There’s also a scene where Ethan has to save Zooey from an apparent group assault at the club. Zooey had lied to him about where she was going, but she learns a lesson to respect her father and tell the truth. The movie also has some strong foul language and frequent, intense action violence. Only the violence is pervasive, however.

All in all, therefore, 3 DAYS TO A KILL is an extremely entertaining action thriller for mature audiences, with a surprisingly positive portrayal of a dysfunctional family trying to reconcile with one another. It’s better than most movies, but not as good as some.