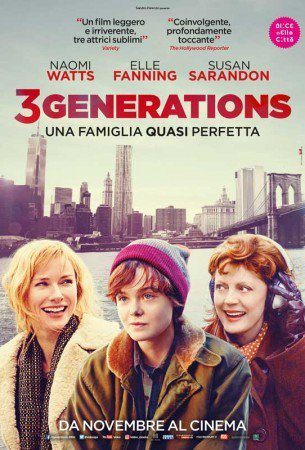 3 GENERATIONS is a drama about a confused teenage girl, Ramona, who thinks she’s a boy and starts hormone therapy to transition to a male. To complete the process, however, she needs the signature of her mother, Maggie, and her father, Craig, whom she’s never met. Her father is reluctant to sign without more information. Even her mother wonders what happens if Ramona changes her mind. Meanwhile, her lesbian grandmother doesn’t understand why Ramona can’t just be a lesbian like her. Facing these obstacles, Ramona will stop at nothing to get what she wants.

3 GENERATIONS is a predictable, but well-acted, propaganda movie. The filmmakers use a little humor to make their message more appealing. The movie has a strong Romantic, politically correct, homosexual, leftist worldview. It favors letting boys and girls decide on their own what sex they want to be, no matter what. Ultimately, as usual with other Hollywood movies about LGBT issues, it all comes down to an emotional response rather than an intellectual, moral or even scientific one. Also, 3 GENERATIONS has a lot of foul language.

(RoRoRo, PCPCPC, HoHoHo, FeFe, LLL, V, SS, NN, A, D, MMM) Very strong Romantic, politically correct worldview about a delusional girl who thinks she’s a boy with very strong homosexual and strong feminist elements, including outspoken discussions regarding gender and genitalia, and grandmother is a lesbian; at least 32 obscenities and two strong profanities; main character is beaten up by a boy on the street and gets black eye; depiction of a lesbian relationship, main character is a teenage girl who thinks she’s a boy and cross dresses, references to past fornication, and a “morning after” scene with two unmarried people; partial upper female nudity; alcohol in several scenes; cigarette smoking is prevalent; and, very strong miscellaneous immorality and problems include the portrayal of a highly dysfunctional family, child parents self and parent, female “transgender” character lies to parent, parent lies to child, references to divorce, moral relativism, and female protagonist rejects her God-given gender.

3 GENERATIONS is a story about a confused teenage girl, who thinks she’s a boy and starts hormone therapy to transition to a male, and how that affects her parents and lesbian grandmother. 3 GENERATIONS is a predictable though well-acted propaganda movie with a strong Romantic, politically correct, homosexual, leftist worldview, and plenty of foul language.

The movie stars Elle Fanning as Ramona Bennett. Since a young age, Ramona has rejected her gender and seeks treatment to make a transition to being a male. She wants to go to a new school and be “normal,” which in her mind is to be a boy. Ramona wants to be called Ray. Her mother, Maggie (Naomi Watts), has already adapted to referring to Ramona with male pronouns. Maggie’s mother and Ramona’s grandmother, Dolly (Susan Sarandon), is having difficulty accepting that Ramona wants to become a boy. Dolly is an outspoken lesbian, who lives with Frances (Linda Emond). All four females, Ramona, Maggie, Dolly and Frances, live in one residence owned by Dolly in New York City.

All three generations are present at a meeting with a physician, who explains that Maggie and Ramona’s father must both sign the consent form for Ramona to undergo testosterone treatment. This is an issue because Maggie hasn’t seen or talked with Ramona’s father for many years. It’s implied that he’s a deadbeat dad. Dolly is vocally opposed to Ramona’s decision to become a boy. She cites her supposed “traditional feminist” views. She simply can’t understand why Ramona won’t simply become a lesbian. Dolly’s lesbian girlfriend chooses not to get involved in the discussion, although her day job is to lobby against female genital mutilation at the United Nations.

Throughout the story, Ramona documents the struggles with her “transition” by making videos with her cellphone video camera. Ramona develops a love interest in a girl at her school. She includes the girl in her videos, and they develop a friendship.

Eventually, Maggie, then Ramona, goes to Ramona’s father, Craig, to get him to sign the consent form. Craig is reluctant to sign without more information. Even Maggie wonders what happens if Ramona changes her mind.

3 GENERATIONS is a predictable propaganda movie. The filmmakers use a little humor to make their message more appealing. The movie has a Romantic, politically correct, homosexual, leftist worldview toward the transgender issue. Ultimately, as is usual with LGBT issues, it all comes down to an emotional response rather than an intellectual, moral or even scientific one. 3 GENERATIONS also has a lot of foul language.

Gender confusion (or dysphoria) can be a serious condition that should not be taken lightly. Liberal and leftist solutions to the topic have been a dismal failure. For instance, as reported by John Hopkins University and other groups, even after surgery, people suffering from gender confusion have a significantly higher rate of mental problems, substance abuse and suicide than the general population. If “changing” one’s sex truly was a valid solution, then this would not be the case.