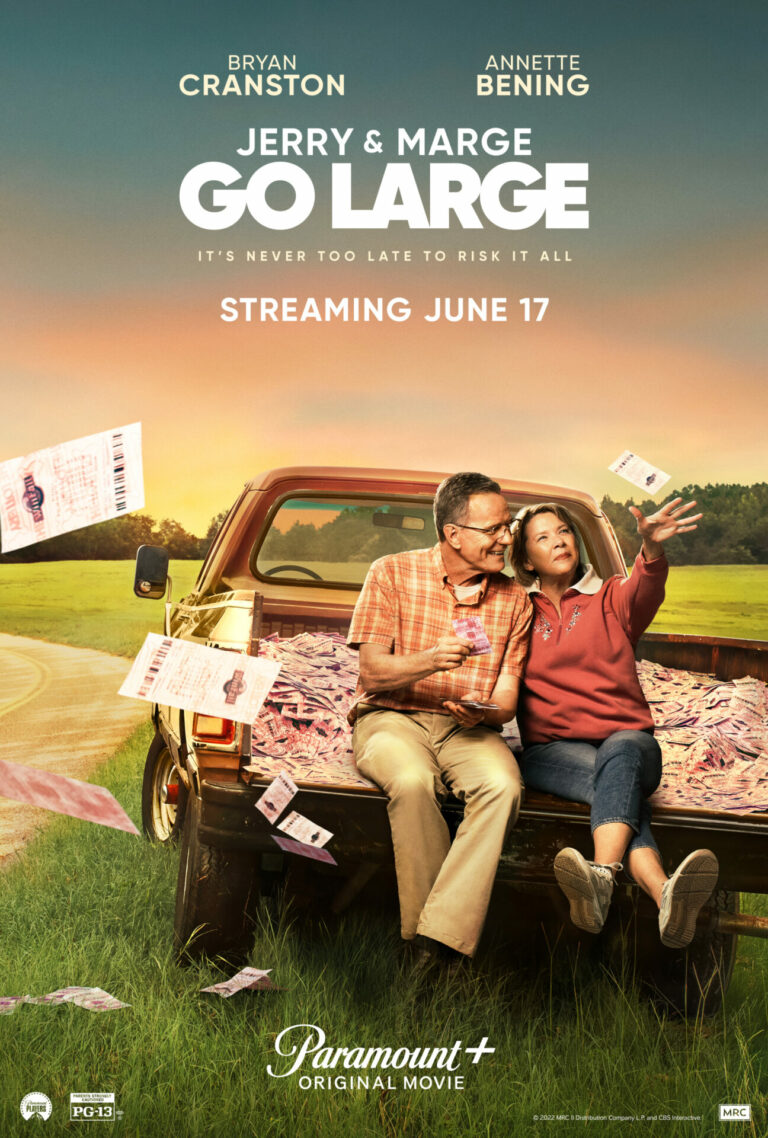 JERRY AND MARGE GO LARGE is a comedy streaming on Paramount Plus. Jerry is a retired math whiz. When he finds a glitch in the state’s lottery system, he decides to play the lottery full time. Jerry’s wife, Marge, finds out what Jerry’s doing, but she decides to go along with the adventure in order to spend time with her husband. Jerry decides to make a company out of the winnings and let the townspeople get shares. The entire town starts to be revived from the money Jerry and Marge are winning. However, will they be able to keep on winning and will they risk it all?

JERRY AND MARGE GO LARGE is a little slow, but it’s an entertaining, funny movie with a moral worldview about giving back to the community. The movie makes an effort to say what the main characters were doing was legal and was all about gifting the money to those in need. JERRY AND MARGE GO LARGE isn’t suspenseful, but it’s appealing enough to be enjoyed by the retirement community. Caution is advised for older children.

(BB, LL, S, A, DD, M):
Dominant Worldview and Other Worldview Content/Elements:
Strong moral worldview about giving back to the community and helping needy people, and includes a strong family unit and a strong relationship between a married couple;
Foul Language:
10 obscenities and one Jesus profanity;
Violence:
No violence;
Sex:
Implied sex within a marriage;
Nudity:
No nudity;
Alcohol Use:
Alcohol use;
Smoking and/or Drug Use and Abuse:
No tobacco use, but there are mentions of smoking marijuana; and,
Miscellaneous Immorality:
The plot relies on gambling, and a side character is going through a divorce.

Jerry has just retired from his long standing job and his family is trying to help him find something he could focus on and foster. When they give him a boat, he seems to have no desire to work on it but gives it a try and ends up destroying the engine. While the boat’s getting fixed, Jerry overhears something about the lottery and wonders if a mathematical equation could take advantage of a glitch in the system. Soon, Jerry realizes he’s able to figure out the glitch, which would allow him to win big.

It’s not long before Jerry’s wife Marge sees that Jerry isn’t acting normal. Her wish is that their marriage be filled with excitement again and something new. When she confronts him, he tells her he’s playing the lottery. Instead of getting angry at him, she decides to help him, thinking this is the adventure they both could bond over.

Jerry decides to make a company out of the winnings and let the townspeople get shares. The entire town starts to be revived from the money Jerry and Marge are winning. The question is, will they be able to keep winning and will they decide to risk it all?

Based on a true story, JERRY AND MARGE GO LARGE has a moral worldview about giving back to the community. The movie makes an effort to know that finding the glitch in the lottery was approved by the administration that ran the lottery because Jerry and Marge were still buying tickets. This implies that Jerry and Marge were doing something legal. One of the movie’s themes is to not be greedy and hoard money, but rather give it away to people in need. The main characters are committed to their marriage, but a secondary character is going through a divorce.

JERRY AND MARGE GO LARGE is entertaining and funny, but it does drag on a bit and feels slow. Clearly, JERRY AND MARGE GO LARGE is made for an audience that’s going through the same thing as the main characters, including retirement and being empty nesters. Because of this, the movie isn’t extremely suspenseful or exciting, but it does have an uplifting message about generosity. MOVIEGUIDE® advises caution for older children.