"Compelling but Not Riveting" 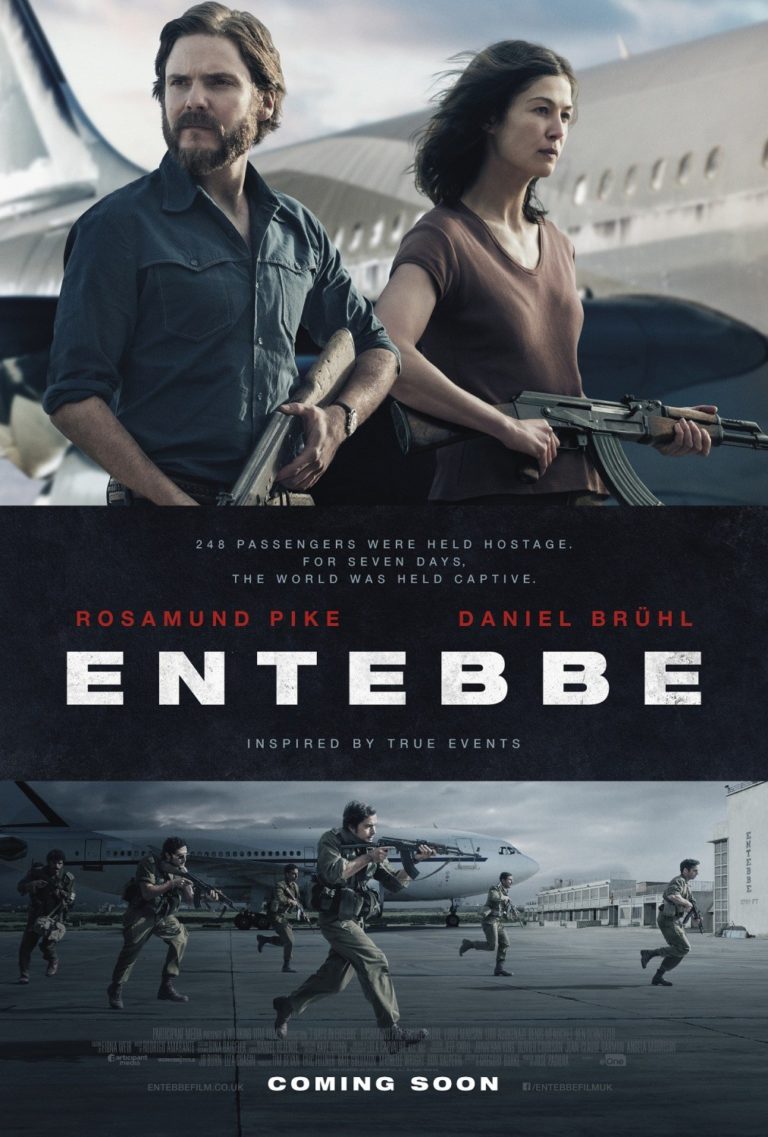 7 DAYS IN ENTEBBE is about the days leading up to a 1976 Israeli military raid to free 106 hostages, including 84 Israelis. On June 27, 1976, two Palestinians and two German radicals, a man and a woman, hijack a jet headed to Paris from Israel. The next day, they are joined by four other Palestinian terrorists at the old airport in Entebbe, Uganda. The terrorists free the Non-Israeli passengers but keep the flight crew and 10 other passengers who refuse to leave without the Israelis. Meanwhile, Israel’s Defense Minister tries to develop a plan to free the hostages that will satisfy the Prime Minister.

7 DAYS IN ENTEBBE is well made and relatively accurate, with a strong moral worldview. However, it focuses too much on the two German hijackers and not enough on the hostages. Also, it inserts a moral equivalence between Israel and the Palestinians, who have been trying to wipe out Israel since 1947. In addition to brief foul language and intense violence, 7 DAYS IN ENTEBBE contains politically correct revisionist history that dilutes its accuracy. Extreme caution is advised.

(BB, C, PP, Ab, PCPC, RHRH, L, VV, A, D, M):
Dominant Worldview and Other Worldview Content/Elements:
Strong moral worldview with some redemptive elements advocating against terrorism and threatening civilians and some people risk their lives for others, with some patriotism where Israeli soldiers and government officials are concerned about serving their country and protecting its civilians, terrorists are Anti-Semitic and act like Nazis and accuse Israel of being “fascist” but are rebuked, and movie contains some strong politically correct revisionist history that isn’t true and that inserts a moral equivalence between Palestinian Anti-Semitic aggression and Israel’s defense of its existence and its citizens from military and terrorist attacks;
Foul Language:
Six obscenities (including one “f” word) and no profanities, plus soldier vomits into helmet during bumpy plane ride;
Violence:
Strong and light, often intense, violence includes terrorists waving guns and holding a grenade hijack a plane and threaten the crew and passengers, Palestinian terrorists beat up a French man mostly off screen because they think he might be an Israeli agent, one terrorist kicks man in stomach, this man has bloody wounds on his face and torso from the beating, commandoes raid airport terminal where hostages are being held and shoot terrorists, one soldier is hit by gunfire, commandoes shoot two airport military guards, soldiers exchange gunfire, threats of violence against hostages;
Sex:
No sexual content;
Nudity:
No nudity, but dancers strip down to T-shirts and underwear during a dance routine, but the purpose of the routine is really vague;
Alcohol Use:
Light references to alcohol;
Smoking and/or Drug Use and Abuse:
Some smoking and woman occasionally takes some pills over seven days, but no details are mentioned about the pills; and,
Miscellaneous Immorality:
Palestinian and German terrorists hijack a commercial plane and take the passengers hostage to blackmail the Israeli government, woman passenger lies about being pregnant and sick so hijackers will release her, evil African leader sides with hijackers and terrorists.

7 DAYS IN ENTEBBE is a drama about the days leading up to the July 1976 Israeli military raid on eight terrorists holding 106 people, including 84 Israelis, hostage at an old airport in Uganda. 7 DAYS IN ENTEBBE is well made and relatively accurate, with a strong moral worldview, but it contains brief foul language and succumbs to some apparent political correctness and revisionist history to “humanize” a couple of the terrorists, along with promoting moral equivalence between the Israelis and the Palestinians.

Cut to June 27, 1976. Two Palestinians and two left-wing German radicals, a man and a woman, hijack an Air France jet headed to Paris from Israel via Athens, Greece. The four terrorists force the jet to land in Benghazi, Libya, then take the jet to the old airport in Entebbe, Uganda, where they are met by three or four other terrorists. They and the passengers are all greeted happily by Uganda’s notorious dictator, Idi Amin, who’s siding with the terrorists to get Arab oil and Russian weapons.

A couple days later, the terrorists free the Non-Israeli passengers but keep the flight crew and about eight other passengers who refuse to leave without the Israelis. They threaten to start killing hostages if their demands are not met, starting with the children.

Meanwhile, Israeli Prime Minister Yitzak Rabin is inclined to negotiate with the terrorists, but Defense Minister Shimon Peres thinks a commando raid to free the passengers is needed. They start planning for both contingencies, but can the Israeli military come up with a feasible plan that will work without killing a bunch of passengers?

7 DAYS IN ENTEBBE is well made and relatively accurate, with a strong moral worldview. However, it puts too much focus on the two German hijackers and the lead Palestinian hijacker. More focus should have been on the civilian hostages, though the scenes of the Prime Minister and Defense Minister debating what to do are surprisingly compelling. The movie also inserts a moral equivalence between the cause of the Palestinians and that of the Israelis. In reality, the Palestinians have not just fought for freedom; they’ve fought to destroy completely the state of Israel. By turning toward political terrorism to achieve that goal, including hijacking planes and carrying out homicide bombings, the Palestinians virtually have destroyed any moral legitimacy their cause might have. Finally, the movie’s depiction of the female German terrorist is too light. Toward the end, the movie suggests she had second thoughts about the hijacking. Reports from the hijacking survivors, however, claim that she acted like a Nazi throughout her treatment of the Israeli hostages. They also claim that the male German terrorist didn’t want to use any violence against the hostages. The final assault from Israel’s military would bear that out; unlike his comrades, he refused to shoot at the hostages when the Israeli soldiers stormed the terminal. His final act of mercy went against the plan to start killing the hostages if the Israeli military showed up.

Despite the revisionist history cited above, the movie does show that the Palestinian hijackers beat up one of the French passengers because they thought he was hiding his Israeli citizenship for ulterior motives. The movie shows images of the man’s bloody wounds from this beating. 7 DAYS IN ENTEBBE also shows how Uganda’s leader at the time, Idi Amin, worked with the hijackers, whom he supported for crude, wicked political reasons.

Ultimately, 7 DAYS IN ENTEBBE is rather forgettable, compelling but not riveting. In addition to some brief foul language and intense violence, it contains some politically correct revisionist history that dilutes its otherwise accurate portrayal. Extreme caution is advised for 7 DAYS IN ENTEBBE.