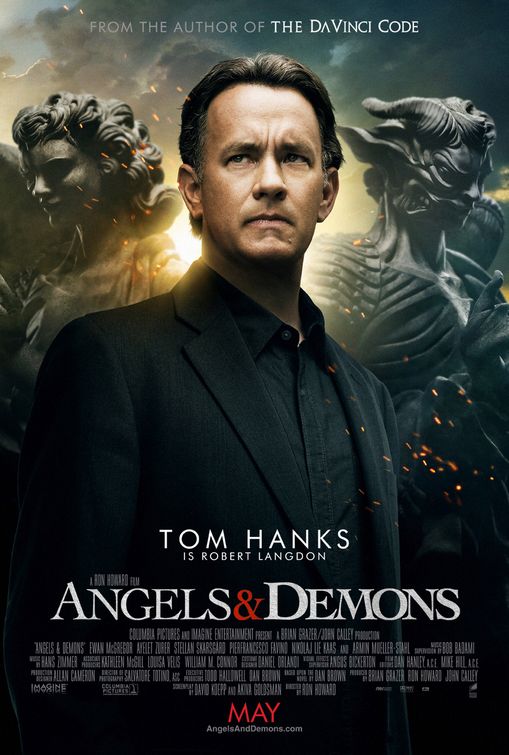 The movie version of ANGELS & DEMONS opens with the cardinals convening to elect a new pope since the pope has just died. A papal police officer flies to Harvard to get Professor Robert Langdon because four cardinals have been kidnapped, with the intention of killing each one on the hour, and the Vatican has been threatened. Meanwhile, at the CERN Laboratory in Switzerland, someone has murdered a scientist, removed and used his eyeball to gain access to steal a canister of dangerous anti-matter. His science partner, Vittoria, arrives in Rome at the same time as Langdon to find the anti-matter before the Vatican is blown to smithereens one hour after the last cardinal is murdered.

Despite excellent special effects, the mystery in ANGELS & DEMONS is so convoluted that the actors often look like they’re bystanders. In fact, Tom Hanks seems as if he’s sleepwalking in his role. ANGELS & DEMONS avoids some of the most powerful emotional parts of the book as well as some of the anti-Christian, anti-Catholic speeches and adds some positive Christian content, but retains the book’s revisionist history and prevailing smearing of Christianity through false information.

(HH, AbAbAb, CC, B, LL, VV, N, A, D, M) Humanist science versus Christian religion storyline supporting a false materialistic worldview that strongly supports the humanist position against the Bible and Christianity, with some very, very pro-Christian statements that, however, are unconvincing to the agnostic hero and movie includes many anti-church, anti-Christian, anti-faith barbs, smears and insinuations, plus and a resolution with positive portrait of Catholic Cardinals; five obscenities and five profanities; several acts of intense violence, including an eyeball on the floor of a laboratory, cardinals are literally branded with ambigrams, pope’s assistant brands himself, people shot, cardinal burned to death, attempted drowning, blood spurting from a man whose lungs have been punctured, people blown around by explosion, parachutist battered and beaten when he hits building; no sex; very brief upper male nudity; alcohol; smoking; and, deception by Vatican in news reports and renegade priest.

The movie version of the controversial book ANGELS & DEMONS avoids some of the most powerful emotional parts of the book as well as some of the anti-Christian, anti-Catholic speeches, but retains the book’s sophomoric tone of smearing religion through false information while trying to whitewash the hero’s position through some positive references to Jesus Christ, faith and the church that do not convince the hero. The drama in this Robert Langdon novel prequel, now a movie sequel, is based on the alleged conflict between science and religion.

Avoiding the intense jeopardy of the book, the movie opens slowly with the death of the pope and the cardinals convening to elect a new pope. Four cardinals are kidnapped and a strange kidnap note is sent to the Vatican. A papal police officer rushes to Harvard to get Professor Robert Langdon, a symbologist who might be able to interpret the note. The note threatens to kill one cardinal every hour leading up to midnight.

Meanwhile, at the CERN Laboratory in Switzerland, someone has murdered a scientist to remove and use his eyeball to gain access to a top secret experiment and steal a canister of highly dangerous anti-matter. The scientist’s research partner, Vittoria, arrives in Rome at the same time as Langdon to recover the anti-matter that is set to explode at midnight and blow the Vatican to smithereens. Robert and Vittoria team up, but without the sexual affair in the book (in fact, their relationship is so bland that it saps the movie of jeopardy).

A clue indicates that the Illuminati are back. Supposedly, the Illuminati are a group of scientists who want revenge for the death of four of their members a couple hundred years before when they were killed by the Catholic Church, which condemned them as heretics. It must be noted that the University of Georgia Scholar, Professor Thomas Lessl, has found that there never were four scientists executed by the Catholic Church for their scientific beliefs (See: http://www.catholicculture.org/culture/library/view.cfm?recnum=2950)

After some resistance by the Vatican Swiss guard, Langdon gets access to the Vatican archives. He finds a manuscript from Galileo that contains clues to the four churches where the cardinals will be killed according to the Illuminati’s plan. In the process, the movie alleges falsely relying on Dan Brown’s imaginative mendacity that many famous Catholics were actually Illuminati agents. So, the movie becomes a race against time to save the cardinals and save the Vatican.

A 23-year-old at the screening thought that ANGELS & DEMONS was very dull. Anyone reflecting on the plot will realize that there are tremendous plot holes with the storyline. For instance, if the Illuminati had so many agents working inside the Vatican at the time the four scientists were condemned and executed (an event that never happened), why didn’t the Illuminati attack the Vatican a couple hundred years ago when their members were killed? A couple hundred years is a long time to wait for revenge. [Spoiler alert] Of course, the Illuminati are just a gigantic MacGuffin, or imaginary plot device to motivate the characters, because the real villain in the book and the movie is a key insane Catholic in the Vatican itself who proclaims deep faith in Jesus Christ and thus symbolizes how misguided men of the cloth (and all Christians) are.

Throughout the movie, there are smears, innuendoes and false statements made about Christians, the church and Christian history. The popular myth used by humanist scientists who have not studied history to smear the church about Galileo being persecuted by the Catholic Church and Christianity because he taught that the earth revolves around the sun is countered by the facts and the truth, however. In reality, the opposition to Galileo was actually started by some science philosophers and scientific academics of his day, because they accepted some of the false scientific theories of Aristotle and other pagan philosophers that Galileo and other Christian scientists had proven to be false. In fact, the wide acceptance of these false scientific theories by pagans had led many people in Galileo’s time, including some church officials, to distort various Bible passages so that they agreed with Aristotle’s views. Thus, the persecution of Galileo, which was also not as harsh as it is often portrayed, was not started by the Catholic Church. In fact, the Catholic Church was probably more concerned about Galileo’s theological position that individual scientists could personally determine what the Bible means on their own, no matter what the Catholic Church taught.

As University of Georgia Scholar, Professor Thomas Lessl, has noted in his article, THE GALILEO LEGEND, (See: http://www.catholicculture.org/culture/library/view.cfm?recnum=2950):

“Galileo, who remained loyal to the Church to the very end of his life – and was even carried to daily Mass when he became too feeble to walk – clearly understood that he had been the victim of an academic feud and that the Church had been drawn in on the side of his enemies only through beguilement.”

Also, many scientists at the time of Galileo were just sorcerers, magicians and thieves, including killing people so they could examine their bodies. Thus, science itself was full of heretics, fools, liars, and thieves. Even modern science has not rid itself of the hubris that infected the rudimentary alchemy of the middle ages.

“only one scientist who was sentenced to death by public authorities prior to the 20th century – when the Nazi and Soviet governments greatly enlarged this number. That was the great chemist Antoine Lavoisier, who was sent to the guillotine during the [humanist, anti-Christian] French Revolution. Although the specific charges raised against him by the Terror were political rather than scientific, the anti-scientific tendencies of the regime that condemned him are a fact of history – curiously, a little-known fact. The science textbooks our children read make free with accusations against the Catholic Church over her treatment of Galileo, but we would be hard pressed to find any that pay similar attention to the French Revolutionists’ closing of the Academy of Science and their decapitation of France’s greatest scientist.”

Faith is also often denied throughout ANGELS & DEMONS. When confronted by the Cardinals with various statements about Jesus Christ, Robert Langdon keeps his agnosticism. The movie’s ultimate impression is that the Catholic Church was mostly a bunch of well meaning but bumbling fools with a few really bad guys and hypocrites included in the bunch who attained positions of power.

Although the movie says science and religion should be able to complement each other, the movie clearly takes the side of a humanist sort of science. And, the science in the movie is suspect. The whole theory of anti-matter, for example, has come under re-evaluation by science. Newtonian physics, which proposes an orderly, planned universe, has not been overthrown by string theory and other pseudo-metaphysical theories floating around today, as the movie intimates. And, the thought that somebody has found a God particle reduces God to a small, infinitesimal cog in the wheel.

For some reason, most likely the dumbed-down education system and the constant attacks of the mass media, too many people believe the kind of specious, fallacious and mendacious science and history spewed by movies and books like ANGELS & DEMONS. Uneducated viewers are also open to the occult claptrap theories that Robert Langdon proposes.

Finally, the notion of a secret Illuminati conspiracy is, in fact, absurd, especially when the Galileo manuscript writes the secret messages in English instead of the dominant languages at the time. In fact, it’s written in modern English, which makes the plot in ANGELS & DEMONS even sillier and more absurd.

Some critics have alleged that author Dan Brown is one of the most brilliant writers of our age. If these critics cannot see through all these myth conceptions and gigantic plot holes, they should get another profession.

The good news is that the violence, although intense, is not excessive in ANGELS & DEMONS. Also, the novel’s sex scenes have been left out.

Also, the assassin henchman of the grand conspirator is not a rabid Muslim as he is in the novel, but a very lapsed Catholic. He is not killing for Allah, but for money.

The mystery is so convoluted in ANGELS & DEMONS that the actors often look like they’re looking for a part. Vittoria seems out of place in much of the movie, for example. And, Tom Hanks seems to be sleepwalking through much of his role. The action scenes Langdon had in the book are not in the movie. Therefore, Langdon is always taking a back seat to the action.

The special effects in ANGELS & DEMONS are excellent. The music is serviceable. But, overall, the movie is a missed opportunity. Without the excitement of the book, and with the continuous smearing of Christianity and the church, it is hard to imagine that the aging Robert Langdon will have legs at the box office.

Truth, morality and science have no solid intellectual or logical foundation on which to stand without a firm belief and faith in the existence of an all-powerful, omniscient, eternal, transcendent, and benevolent personal God and Divine Creator. This logic also tells us that, since such a Creator God MUST exist, then the miracle of Jesus Christ’s physical death and resurrection can be empirically tested and historically confirmed. This is exactly what history, archeology, geography, and ancient written documents, including documents outside the Bible, have proven.