"Origins of Rock and Roll" 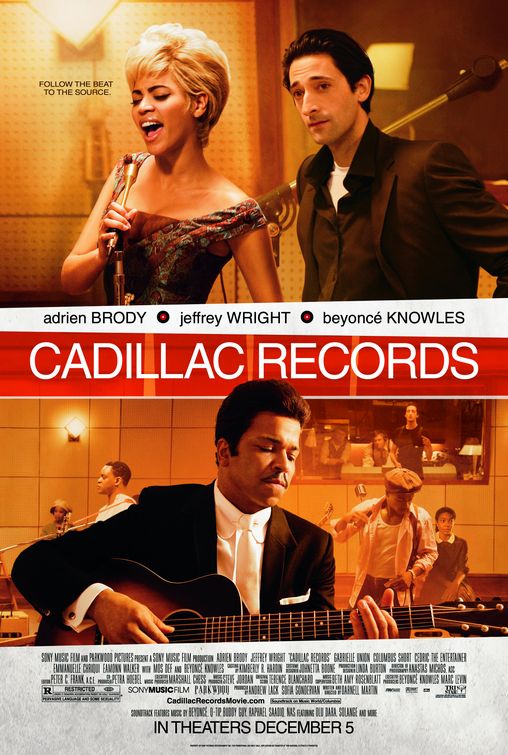 CADILLAC RECORDS is based on the true story of the rise and fall of Chess Records in the 1950s, which featured the blues sound of Muddy Waters. Waters has a unique sound with his electric guitar, so Leonard Chess forms a record label featuring him. Waters begins to have hit records. Chess controls Waters and other black musicians, including Chuck Berry, with women, alcohol and drugs. He also cheats them out of their royalties and makes them dependent on him by loaning them money and fixing the problems they have. Elvis Presley and other white artists copy this style of music from the black artists. Soon, the black musicians are eclipsed by the very music they helped create.

CADILLAC RECORDS is a well made, compelling story. The characters, while not fully developed, are still engaging to watch. Their stories are ultimately tragic, because they rely on the whims of a record buying public along with a pagan lifestyle to find meaning. The movie also contains abundant foul language and multiple sex scenes among married and unmarried couples, plus drug references. The sex and obscenities will turn off most media-wise moviegoers.

CADILLAC RECORDS is based on the true story of the rise and fall of Chess Records in the 1940s and 1950s. The record label featured the blues sound of Muddy Waters, which was the basis for what came to be known as “rock and roll” music.

Chess buys Cadillacs for all the musicians and exploits their desire for women, alcohol, drugs, and material possessions. As Chess creates a record label, he cheats the musicians out of their royalties. He also creates dependence on himself by loaning them money and fixing the problems they each have.

Chess adds Chuck Berry, Etta James and “Howlin’ Wolf” to his label. Soon, the blues becomes rock and roll, especially with Berry’s unique addition of country beats. Elvis Presley, Bill Haley, Buddy Holly, and other white artists copy this style of music from the black artists and soon the black musicians are eclipsed with the very music they helped create.

Most of the musicians lost their fortunes, but Muddy, along with composer Willie Dixon, sued Chess Records for unpaid royalties and found a new career opening for the Rolling Stones, whom they inspired.

CADILLAC RECORDS is a well made and compelling story. The fact that it’s true to life and viewers recognize many of the songs and artists makes the movie intriguing. The characters, while not fully developed, are engaging to watch. Their stories are ultimately tragic as they rely on the whims of a record buying public along with fame and a pagan lifestyle to find meaning in their lives.

There is much foul language and multiple scenes of depicted sexual relations among married and unmarried couples. Also, Chess bribes radio disc jockeys and the police. In one moment of moral integrity, Chess leaves a hotel room so as not to be involved in an adulterous relationship. However, later, Etta James becomes his girlfriend. He even buys her a house. Finally, the movie contains some fight scenes and one gunshot.

The story is told against the backdrop of segregation. The music is originally called “race music” until Elvis, Buddy Holly and the Beach Boys make it popular.

As a piece of history, CADILLAC RECORDS delivers a stunning tale that is, however, regrettably filled with much objectionable material. With discernment, fans of contemporary music may find CADILLAC RECORDS a compelling experience, but the movie’s sexual content and abundant foul language will drive media-wise viewers away.