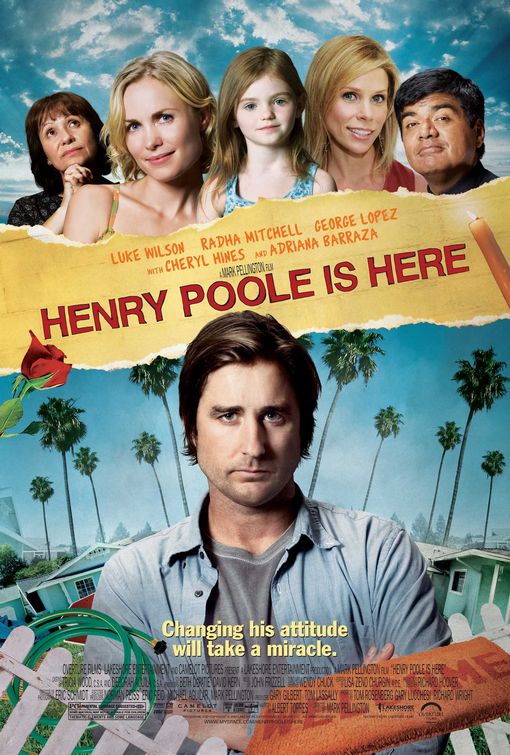 HENRY POOLE IS HERE is an independent movie about faith and miracles. Luke Wilson plays the title role, a young man whose doctor tells him he’s got three months to live. Henry decides to spend his last days in the California suburb where he grew up. Henry’s world is turned upside down when he befriends a troubled young girl and her pretty mother next door. Also, his Catholic Hispanic neighbor, Esperanza, discovers that a stain on the stucco of Henry’s house has an image of Jesus on it, with a red drop of what looks like blood. Henry’s lack of faith is further challenged when the little girl and another person experience miraculous healings after touching the Jesus image.

Though not overtly evangelistic, HENRY POOLE IS HERE is a poignant, absorbing tale of a despondent, hopeless man without faith being transformed by both the miraculous and by new relationships with caring people. Though the ending falls a little short, the movie is inspiring, well written and deftly directed, with a positive nod to God, faith and miracles. There is some strong foul language, however, that demands caution for children, or pre-teenagers.

(CC, BB, LL, V, N, AA, M) Strong Christian worldview with strong moral, biblical elements but protagonist fights Christian faith in God, Jesus and miracles until almost the very end, though the ending could be more clearly evangelistic; six obscenities, four strong profanities and 11 light profanities, some of which are exclamatory; angry man shouts at people in several scenes, throws something in one scene and deliberately breaks a larger inanimate object in another scene, plus man injured and wakes up in hospital; no sex scenes but couple kisses and shares a candlelit dinner with pizza; upper male nudity; dying man drinks a lot to the point of excess, though movie does not show really overt drunkenness; no smoking; and, dying man in pain berates Christians but Christians treat him well so he comes off looking like the bad buy and some rudeness.

HENRY POOLE IS HERE is an independent movie about questions of faith and miracles. Though it presents both pros and cons about these questions, it seems to side in favor of God, faith, miracles, and Christianity, but it could be stronger.

Luke Wilson plays the title role, a young man whose doctor tells him he’s only got about three months to live. To spend his last days, Henry tries to buy the ranch house where his family used to live. He’ll pay whatever the owners want, but they refuse, so he buys a house nearby. He tells the realtor not to bother doing any repairs on the house (he’s not going to be staying long), but she does it anyway, even to the point of re-painting the stucco.

Henry’s world is turned upside down when his Catholic Hispanic neighbor, Esperanza, notices a water stain on the wall of Henry’s new house. The stain has developed a faint vision of Jesus Christ. Henry angrily rejects Esperanza’s Christian explanations of this alleged miracle, but then a small red stain appears on top of the image. The small red blob refuses to completely disappear. Even if someone wipes it off, it reappears. Reluctantly, Henry agrees to let Esperanza’s priest and church test the red liquid on the image, to see if it really is a drop of blood.

Henry’s lack of faith is further challenged when two people experience miraculous psychological and physical healing after touching the Jesus image with the red stain. Henry keeps fighting the religious implications of these miracles, but his budding relationship with a pretty abandoned woman, Dawn, and her young daughter, Millie, next door begins to open his heart. Yet, Henry is still very reluctant to see if, by touching the stain himself, he can be healed of his own affliction and saved from impending death.

Though not overtly evangelistic, HENRY POOLE IS HERE is a poignant tale of a despondent, hopeless man being transformed by both the miraculous and by new relationships with caring people. The title character is also touched by the quirky behavior of Dawn’s cute daughter, Millie, who has been traumatized psychologically by her father’s sudden abandonment of the family.

Writer Albert Torres and director Mark Pellington deftly weave these motifs together, despite the movie’s low budget. The cast also does a great job of telling this story.

Ultimately, HENRY POOLE IS HERE is an uplifting story of faith, hope, caring, and miracles. The movie shies away from making strong, overt evangelistic points with Christian theology, but it treats Christian faith in miracles respectfully. Esperanza is sometimes a little bit pushy, which results in some humor at her expense, but her character is mostly positive. The movie shows her Christian faith to be strong, insistent and caring, in spite of Henry’s negative attitude. In fact, she is always extremely patient with Henry, even when his lack of faith becomes angry and destructive. The Gospel of Jesus Christ is not fully presented, but the movie contains positive nods to God, faith and real miracles.

Despite his anger, his overt skepticism and his despondency, viewers can relate to Henry through his obvious pain and his displays of tenderness toward Dawn’s daughter. Eventually, his budding, heartwarming relationship with her and Dawn provides another positive anchor to the story.

Thus, although the ending falls a little short, HENRY POOLE IS HERE is an absorbing, inspiring piece of entertainment. In fact, it could be one of the best movies of the year. Some foul language, however, especially a few strong profanities from the troubled protagonist, require caution for children, or pre-teenagers.