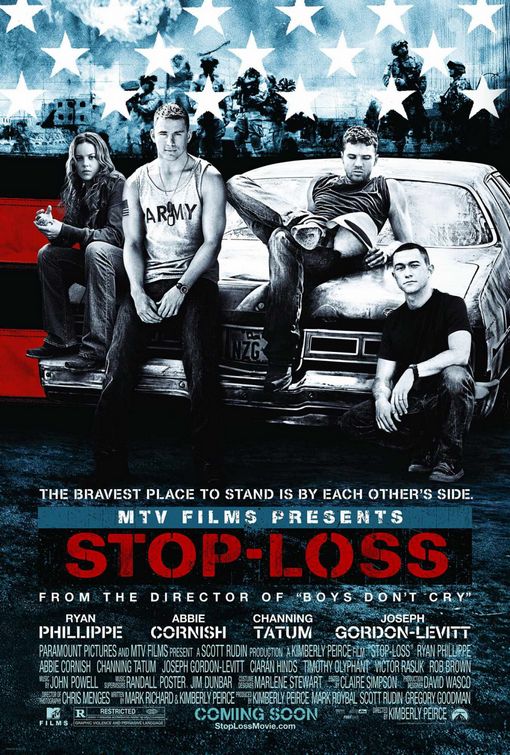 STOP-LOSS is the story of Brandon King, an Army solider who returns from Iraq, only to be called back for another tour because of a clause in his military contract allowing this. To avoid the additional tour, King goes AWOL in hopes of getting help. Ultimately, King must decide what to do – return to the Army and serve his extra tour, go to Canada with a false I.D., or flee to Mexico as an illegal citizen.

STOP-LOSS has positive and dramatic elements, including the genuine patriotism of the soldiers, harrowing battle scenes, and strong bonds of friends and family. However, it suffers from being a “message” movie that has as its villain a little known military policy. There are multiple uses of the “f” word, and drunkenness is common. The dominant worldview is void of God, yet the characters wrestle with suffering, death and sacrifice, trying in vain to find purpose in their world. Ultimately, the characters end the movie depressed and at a loss because they live their life with no spiritual foundation. Thus, the movie will turn off people of faith and values who honor God, country and family.

(HHH, APAP, P, B, C, Ab, RH, LLL, VVV, N, AAA, D, M) Very strong secular humanist worldview with mixed messages of both strong anti-military sentiments and some patriotism, but with moral elements as soldiers deeply care for one another and endanger themselves to help others and a Christian character is portrayed positively but one of his “converts” comes to a bad end, plus some revisionist history; 11 profanities and 82 obscenities; very strong war violence realistically portrayed including gunfire, explosions, much bloodshed, characters losing body parts, plus when not in war setting characters are in numerous fistfights and there are two onscreen murders; no sex; naturalistic upper male nudity, one scene of man only in briefs; significant drinking and drunkenness; smoking; and, stateside soldier goes AWOL.

STOP-LOSS is the story of Brandon King, a decorated Army solider who returns home from Iraq only to be called back for another tour because of a clause (called ‘stop-loss’) in his military contract that allows this. To avoid the additional tour, King goes AWOL in hopes of getting help in Washington D.C. He heads out across the country with Michelle, his fellow soldier’s fiancée.

King’s journey is sidetracked as he visits the parents of “Preacher,” a slain soldier, and then visits Rico, one of his men, now blind and a paraplegic. The other hometown members of his squad don’t adapt well to civilian life as relationships fall apart, alcoholism is rampant, and the soldiers deal with moments of post-traumatic syndrome and flashbacks from the war. Ultimately, King must decide what to do – return to the Army and serve his extra tour, go to Canada with a false I.D., or flee to Mexico as an illegal citizen.

STOP-LOSS has some positive and effectively dramatic elements – the genuine patriotism of the soldiers and hometown, the harrowing battle scenes, and the strong bonds of friends and family. However, it suffers from being mostly a “message” movie that has as its villain a little known policy of the military. The movie first begins to unravel when King flees and continues to argue that he shouldn’t have to go back. It’s not a strong enough “villain” because a potential stop-loss was a part of his agreement in signing up, so King’s rebellion is essentially unfounded. The movie then loses any sympathy for the main character when he murders two petty thieves execution style while having a battle zone flashback.

The movie’s message that war is terrible, painful, and gruesome is true, and the fact that soldiers pay a very high price to serve is underscored. But, making the characters fight the stop-loss clause undermines the characters, and so, ultimately, the filmmaker’s anti-military message fails. Like many “message” films, the plot takes over and characters become lost in the heavy-handedness of the story. There are also a couple of plot holes and questions that are never answered. For instance, why does King need to travel by car from Texas to Washington D.C. to speak with a senator about his situation other than the fact that the plot needs him to do it? Wouldn’t a phone call have done the job? And, why does his buddy’s fiancée need to go along except that the plot needs to involve Steve the buddy. This heavy plotting diminishes the characters as the pro-active antagonists.

In addition, the movie’s worldview is completely void of God. Only in expletives is God even mentioned, yet the characters wrestle with suffering, death and sacrifice, trying in vain to make sense of the world and find purpose. Ultimately, the characters end the movie depressed and at a loss not because of the war but because they live their lives with no spiritual foundation. It seems contrived that the characters, when faced with such trauma, would not even bring God into the conversation.

One of the opening sequence victims in a firefight, however, is a positive Christian character named “Preacher.” As the story unfolds, viewers learn that he baptized some of the soldiers (though the meaning of that is never explored), including Tommy who befriends Preacher. Yet, Tommy struggles with alcoholism, receives a bad conduct discharge and then kills himself. So, the one “convert” comes to a bad end, no better off than the others.