"Moments of Mental Confusion and Contradiction" 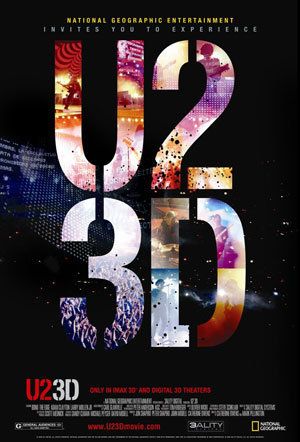 U2 3D is a concert movie featuring the famous rock band promoting peace and love. Shot at seven different shows in South America, it features most of U2’s best songs, with the usual competent vocals by Bono, the lead singer. The 3D process enhances the concert experience, despite often-vague lyrics. U2’s repertoire includes love songs, political songs and songs with spiritual references, frequently mixed together. One of the songs, “I Still Haven’t Found What I’m Looking For,” has positive references to Jesus, God and Christianity, but the last line (repeated in the title) contradicts those references.

U2 3D is brilliantly shot and thrilling in 3D, with catchy music, but there are moments that will annoy moviegoers with discriminating minds. Particularly annoying was an interlude where Bono grabs one of the “Co-Exist” banners favored by the band. The banner features the Muslim crescent, the Star of David and a Christian cross to make the word Co-Exist. Waving the banner, Bono sings that Christianity, Judaism and Islam are all the same, that there is no difference between them. This scene becomes quite silly. It reflects the shallow quality of the band’s socio-political messages.

(PaPaPa, RoRoRo, FRFRFR, PCPCPC, AbAb, C, B, AP, V, S, N, M) Very strong syncretistic, pagan worldview includes very strong Romantic tone with major, politically correct, multi-cultural scene strongly implying that Islam, Judaism and Christianity worship the same God and teach the same things, implicitly opposing those Muslims, Jews and Christians who teach otherwise and some other political references (including a pacifist message that excites the crowd), with some Christian, redemptive references in lyrics and moral values in some songs that are, however, often cryptic and sometimes contradicted, especially by the scene mentioned above, plus a possible anti-American lyric; no foul language; some images of war; very light, somewhat cryptic reference to sex in one or two lyrics; upper male nudity and women in bikini tops or halter tops; no alcohol; no smoking; and, syncretism in one scene and pacifism in many lyric lines and scenes.

The concert movie U2 3D is brilliantly shot and thrilling in 3D, with music that fans of the band will love, but there is a decidedly multicultural, pagan syncretism that many Christians, Jews and Muslims will find annoying, if not offensive.

Shot at seven different shows in South America, the movie features all of U2’s best songs, with the usual excellent vocals from Bono, the band’s most famous member. The 3D process enhances the concert experience in this documentary, which features U2’s catchy music and often-vague lyrics.

What was not vague, however, was an interlude where Bono grabbed one of the crowd’s “Co-Exist” banners favored by the band. The banner features the Muslim crescent, the Star of David and a Christian cross forming parts of the word Co-Exist. Waving the banner, Bono sings that Christianity, Judaism and Islam are all the same, and that there is no difference between Jew, Jesus and Mohammed.

During this scene, Bono also takes a Co-Exist headband, puts it over his eyes, stumbles around and implies that people are blinded by their differences. It seemed quite silly, actually.

U2’s repertoire includes love songs, political songs and songs with spiritual references, often mixed together. One of the songs, “I Still Haven’t Found What I’m Looking For,” has positive references to Jesus, God and Christianity. For example, Bono sings about angels and God, then says, “You broke the bond and loosened the chains, carried the Cross for all my shame. And, you know I believe it. But, I still haven’t found what I’m looking for.” The last two lines, of course, contradict one another. This is confusing, not enlightening.

This theological and existential confusion, coupled with the syncretistic multiculturalism in the scene with the Co-Exist signs, are annoying, excessive and naïve. They violate the clear teachings of the Bible and the Gospel of Jesus Christ. God’s Truth and Righteousness are really not that murky, unlike too many of the spiritual references in many U2 songs. Of course, if U2 clarified some of the murkiness in their religious references, they might not be as popular among those secular music critics who respond to U2’s left-wing, pacifist political angst. The band’s superficial social messages reflect the revolutionary ideology of the peaceniks in the 1960s, a neo-fascist street movement that led to the evil tragedies and excesses created by leftist terrorists like Bill Ayers and his wife, and the mindless, drugged-out hippie followers of Charles Manson.