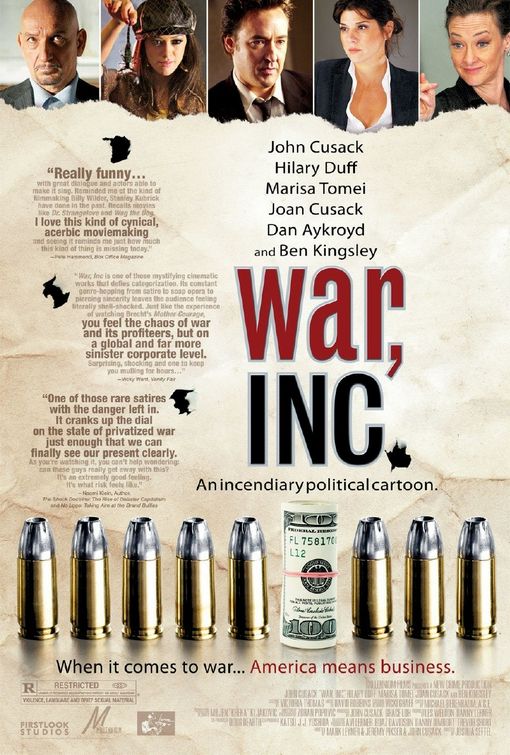 WAR, INC. is a vicious satire of America and President George Bush’s policies on the Middle East and the War on Terror. It stars John Cusack as Hauser, an assassin hired by a corporation secretly controlling the U.S. Government. The company, under cover of the government, has sent its mercenaries to invade a fictional country called Turaqistan. It sends Hauser, posing as the head of the company’s upcoming international trade show, to assassinate a political figure. Hauser’s nerves are shot. He keeps delaying the job so he can seduce a beautiful American reporter, played by Marisa Tomei. In the process, he learns the whereabouts of his daughter, who was kidnapped years ago by assailants who murdered his wife.

WAR, INC. is another vicious anti-American movie falsely mocking President Bush’s efforts to stop radical Muslim murderers and the tyrannical states supporting them. It also viciously attacks the American capitalist system and American military. Finally, the morality presented by the filmmakers is not God-centered, but man-centered, reflecting their Neo-Marxist, Anti-American, humanist worldview. If leftists like John Cusack, who co-wrote the script, got behind the Iraq War, it probably would be over sooner.

WAR, INC. is another vicious, over-the-top anti-American movie about the Bush administration’s efforts to stop tyranny and terrorism in Iraq, Afghanistan and the Middle East. This one is allegedly a satire, but it also tries to get serious in the third act. Artistically, therefore, as well as politically and morally, this movie is a mess.

WAR, INC. stars John Cusack as an assassin named Hauser, who is now working for a corporation based in America that secretly controls the U.S. government and now wants to control the world. Although Hauser tried to quit being a government spy years ago, and even had to kill his boss, he still works as an assassin, a job which he apparently loathes, morally speaking. Still, he keeps doing it.

The public thinks that the U.S. government has hired Tamerlane, a corporation of mercenary soldiers, weapons and other capitalist endeavors, to take over the fictional country of Turaqistan, much like President Bush decided to overthrow Saddam Hussein in Iraq and the Taliban in Afghanistan. Instead of trying to bring liberty, democracy and ultimate peace, Tamerlane is using the invasion to bring American capitalism to Turaqistan, to make money by controlling and seducing the people. The company has even placed ads for itself and other companies, including Coca-Cola, on the tanks and military vehicles used by its mercenary soldiers.

The company sends Hauser to Turaqistan to pose under cover as the manager of its international trade show. Hauser’s real job is to assassinate a political leader. Hauser’s nerves are shot, however. He keeps delaying the job so he can seduce a beautiful American reporter, played by Marisa Tomei. Meanwhile, there’s something about a young flirty Middle Eastern pop singer, played by Hilary Duff, that bothers Hauser. SPOILER: It turns out that the singer is Hauser’s real daughter, who was kidnapped years ago from his house after someone murdered his wife.

WAR, INC. is sometimes confusing and at other times doesn’t know whether to be a satire or a serious drama. Be that as it may, great satire works best when it ridicules human nature in general, indicting all of us or some of mankind’s worst foibles and sins, or when it inserts a morally and/or spiritually uplifting premise. When satire tries to viciously, and especially falsely, attack and belittle political opponents, it usually fails. Thus, WAR, INC. is just another cut-rate example of Bush Derangement Syndrome. Also, its left wing, secular progressive worldview crudely attacks American capitalism as if it’s morally heinous for excellent American businesses like Coca-Cola to sell their products in Iraq, the Middle East and the rest of the world. Finally, the moral philosophy presented by the movie’s filmmakers is not God-centered, but man-centered, reflecting their Neo-Marxist, Anti-American and humanist worldview.

One can debate the pros and cons of President Bush’s decision to go into Iraq (which, by the way, liberals like Sen. Hillary Clinton and Sen. Joe Biden did not stop though they could have), but pacifism is not the answer. In fact, sometimes war is indeed the answer, especially when trying to stop evil, anti-Semitic terrorists who fly planes into buildings and behead and blow up innocent civilians, including children and journalists like Daniel Pearl, who was Jewish. This movie overtly mocks the efforts of the U.S. military to minimize collateral damage during warfare, but that is exactly what many of our brave soldiers say the military does indeed try to do. Historically, this is a Christian principle that the church has advocated since its beginning 2000 years ago. It’s time to support President Bush and our troops now that they are deployed overseas in places like Iraq, trying to defend our liberties and establish a more compassionate society in the Middle East where, for too long, vicious Muslims and other Arab and Persian tyrants have held despotic control.

Of course, Arianna Huffington, founder of the vicious, slanderous left-wing blog called The Huffington Post, says she likes this movie. If, however, leftists like Huffington and star John Cusack, who also co-wrote the script, got behind the Iraq War and America’s troops, it probably would be over sooner! In fact, it may have ended a couple years ago.

WAR, INC. has been compared to Bertolt Brecht’s play MOTHER COURAGE and to Stanley Kubrick’s DR. STRANGELOVE. Brecht was a Marxist who collaborated with the East German totalitarian state run by the Soviet Communists. And, DR. STRANGELOVE is a satirical masterpiece that mocks, to a certain extent, both liberals and conservatives, as well as Communists, to deliver a powerful indictment of human folly. Some of its jibes are admittedly false and go overboard, and the movie makes no theological points, but it is not designed to just superficially bludgeon Kubrick’s political opponents (which were indeed probably conservative). Nor does it try to offer a single spiritual answer to life’s conflicts, much less send a message that’s overtly anti-Christian or anti-God or anti-American. To mention this diatribe in the same breath as Kubrick’s movie is an insult to a true cinema lover’s intelligence.