A LONG WAY DOWN 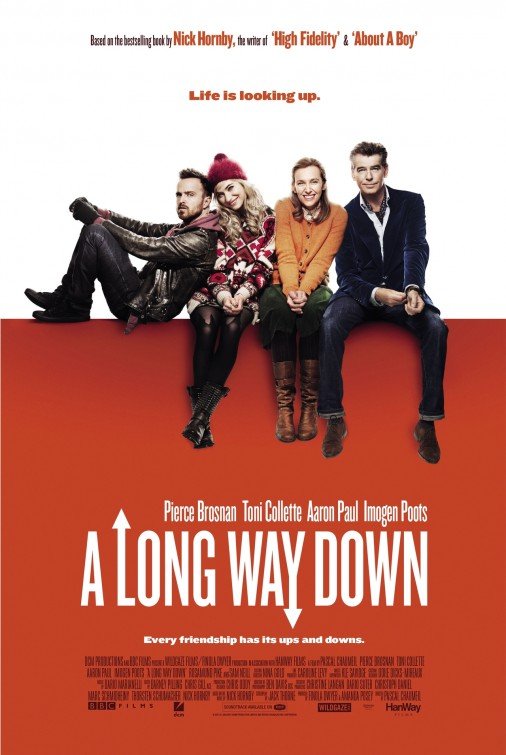 A LONG WAY DOWN is about two men and two women, Martin, JJ, Maureen, and Jess. They meet unexpectedly on New Year’s Eve as each tries to jump off a London skyscraper to commit suicide. Martin is a TV morning show host. Maureen is a struggling single mother taking care of her severely disabled adult son. Jess is a drug-abusing party girl. Finally, JJ is having severe depression for a secret problem. The four talk each other out of jumping. They make a pact to keep alive until Valentine’s Day, when they will meet on the roof again. A series of unusual friendships begins. This is endangered by unexpected notoriety when paparazzi stalk them because of Martin’s TV fame.

A LONG WAY DOWN has well-drawn characters who are likeable, and strong performances. As the four characters bond together, the movie develops surprising, morally uplifting themes. There’s even a brief but strong scene in a church where prayer is extolled. However, A LONG WAY DOWN has plenty of strong gratuitous foul language, mature themes, and some lewd content. So, extreme caution is warranted.

(BB, RoRo, CC, LLL, V, S, N, AA, DD, M) Strong moral worldview overall, undercut by some Romantic elements, but also including a brief but strong Christian scene in a Catholic church that extols prayer and worship; 58 to 65 obscenities and profanities (including some “f” words and a couple GDs); references to suicide and brief comic fistfight between two of the male leads that leaves one with a slightly bloody nose; implied fornication scene between two unmarried characters that starts with kissing and cuts away before showing further activity, then shows them waking up together but without nudity, plus two of the four lead characters have coupled up and are seen smiling and rolling around in bed while the others are unaware and discussion of the fact that the male lead is a TV show host accused of being involved in an affair with an underage teenage girl and went to jail for it; brief shot of one woman character’s bare bottom under a hospital gown; characters drink frequently and hard, but wake up with hangovers; young woman has a drug overdose off-screen and is rushed to the hospital; and, lying and intrusive paparazzi.

A LONG WAY DOWN is about four strangers who stumble across each other while contemplating suicide on New Year’s Eve, and how they become friends when they make a pact to stay alive until Valentine’s Day. A LONG WAY DOWN has a strong moral worldview undercut by some Romantic elements, but also includes a brief strong Christian scene set in a church.

A LONG WAY DOWN follows the story of Martin (Pierce Brosnan), Maureen (Toni Collette), Jess (imogen Poots), and JJ (Aaron Paul). They meet by surprise on New Year’s Eve as each tries to jump off a London skyscraper to commit suicide. Martin is a TV morning show host who got busted for unwittingly having sex with an underage girl, went to prison for it and is now rightfully ashamed. Maureen is a struggling single mother who devotes every moment of every day to her severely disabled adult son. Jess is a drug-abusing party girl. Finally, JJ hides the source of his secret sadness, but having severe depression.

The four talk each other out of jumping and make a pact to keep each other alive and well for the next six weeks, at which point they will meet on the roof again and debate whether to jump off on Valentine’s Day. A series of unusual friendships begins, where the four people help each other improve their lives, but also navigate the travails of unexpected notoriety when paparazzi stalk them because of Martin’s TV fame.

A LONG WAY DOWN features a frequent but not overbearing amount of profanity, yet otherwise its depictions of sex, drug and alcohol use and abuse are handled with discretion while remaining key to the plot. The movie also has numerous positive elements, as it beautifully portrays the relationship between Maureen and her son, offering a stellar example of devoted parenting under the most stressful of circumstances.

The movie carries a strong spirit of Christian agape love, as the characters are there for each other through every imaginable circumstance. They try to help each other improve their lives and regain their will to live. Maureen’s storyline is particularly impressive because it involves a lifelong devotion to her beloved son. Her story leads to a short but strong scene where Maureen is seen lighting a prayer candle in a cathedral after walking past JJ while he’s deep in his own prayer. These are really good, often uplifting character arcs.

Adapted from a novel by Nick Hornby (ABOUT A BOY, HIGH FIDELITY), A LONG WAY DOWN has well-drawn characters who are easy to care about, and strong performances across the board. It continues the tradition of character-rooted dramedies, with positive messages about love and family, adapted from Hornby’s work. Sadly, A LONG WAY DOWN has a significant, unnecessary amount of gratuitous foul language and brief lewd content to go along with its mature themes. However, those who see it may find its more positive themes richly rewarding. That said, extreme caution is advised for A LONG WAY DOWN.