A SHOW OF FORCE 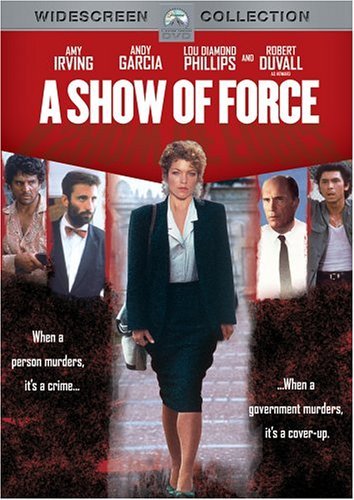 Like FORCE OF CIRCUMSTANCE (also reviewed in this issue), this is another looney left propaganda piece which extols martyred revolutionary-heroes and attacks America and those who side with the U.S.A. With the collapse of communism and Gorbachev’s call for an American market type economy in the heartland of Marxist-Leninism, films of this ilk which feed the flames of revolution seem particularly anachronistic.

On July 25, 1978, two young men were killed by Puerto Rican police on a mountaintop known as Cerro Maravilla. The killings and the ensuing investigation have been described as Puerto Rico’s Watergate. The movie spans the years 1978 to 1983 and takes place entirely on the island of Puerto Rico. The action unfolds against the turmoil of Puerto Rican nationalism, as reflected in the rivalries of competing island factions favoring statehood, continued commonwealth status, or independence.

Kate Melendez, a TV reporter in Puerto Rico, is drawn into the story when she discovers conflicting evidence in the official account of the deaths of the two young men. The pair — supposedly idealistic college students who favored independence for Puerto Rico — had been goaded into the attack by a police provocateur, Jesus Fuentes. Moreover, they are depicted as victims of a corrupt government which is working for statehood. [EDITOR’S NOTE: These students were in fact idealistic Marxist/Leninist revolutionaries who were fighting for the grotesque mockery of human values known as communism which has devastated the lives of billions of people and laid waste to 40% of our planet, makes no difference to these Hollywood ideologues who push political philosophies they don’t understand by playing on the emotional heartstrings of vulnerable audiences.]

The more Melendez looks into the affair, the more it appears to be a setup masterminded by a superficially amiable FBI agent, Frank Curtin, out to bolster the re-election chances of the pro-United States governor. When Melendez discovers a conspiracy and a cover-up among the police, she has to battle both threats from Fuentes and cautionary warnings from her gruff newsroom chief.

The TV station fires Melendez, but she finds work with another station, convincing them to cover the hearings on the killings, which by this time the Puerto Rican senate has agreed to investigate. Melendez finds herself in increasingly desperate and lonely straits until the sudden appearance of a special prosecutor, Luis Angel Mora, and an even more sudden and unexpected arrival of a police eyewitness.

It is a tremendous distortion to say that the film is “based on a true story,” particularly when the credits mention that Frank Curtin is a fictional character. According to the book on which the movie is based, several Puerto Rican intelligence agents testified that their own intelligence chief gave them orders to kill the men. Whereas the book leaves open the question regarding the link in the chain of command that issued the order, the movie solves it by implicating the FBI directly, an outcome that was evident and predictable as soon as the film began.

The film’s premise is that justice and truth prevail over corrupt systems through the courage of individuals. This would be biblical if those individuals were God’s servants yielded to do His will rather than socialists who look to the state for salvation. For Psalm 2 tells us that God is in the process of breaking up the nations that will not serve Him (“You will break them with a rod of iron; you will dash them to pieces like pottery” (verse 9)), and, as in Eastern Europe, those are nations who placed themselves above God, not nations built on biblical principles. However, the film is not interested in God or His will for the nations. Rather, it offends by falsely implicating the FBI (as the film’s title suggests), something which has no basis in reality. If you are curious about this story, read the book instead, MURDER UNDER TWO FLAGS.