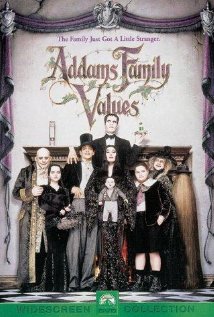 The film ADDAMS FAMILY VALUES, like its predecessor, THE ADDAMS FAMILY, turns tradition upside down, spoofs cherished rituals and beliefs and dwells on the dark, evil side of life. Exhibiting macabre humor on one level, the movie perfectly illustrates several "how to's" that children can copy to kill, maim and mutilate those they don't like, including their baby siblings.

ADDAMS FAMILY VALUES exhibits macabre humor on one level, but on another, the film perfectly illustrates several “how to’s” in doing away with one’s victim. The movie, like its predecessor, THE ADDAMS FAMILY, turns tradition upside down, spoofing cherished rituals and beliefs and dwelling instead on the dark, evil side of life. As the movie opens, Morticia has Baby Pubert who, with his mustache, looks exactly like his father. The other children, Wednesday and Pugsley, are jealous of the baby and try several times to kill him. Uncle Fester falls in love with the Nanny, Debbie. She, in turn, sends the children to summer camp to get them out of the way for her diabolical plans.

Despite the considerable black humor in the film, the movie presents a dark, twisted view of life. Especially disturbing are the supposedly funny scenes when Wednesday and Pugsley attempt to kill the baby by dropping him from heights and by guillotining him. If children imitate these scenes (and probably some may try), there may be no one to save the hapless infant like there is in the film. Also, the emphasis on the occult and demon powers is distressing. Furthermore, God is blasphemed, and Christianity is mocked. When the campers sing “Cum Bya, My Lord,” the song is considered punishment.