ALL THE KING’S MEN 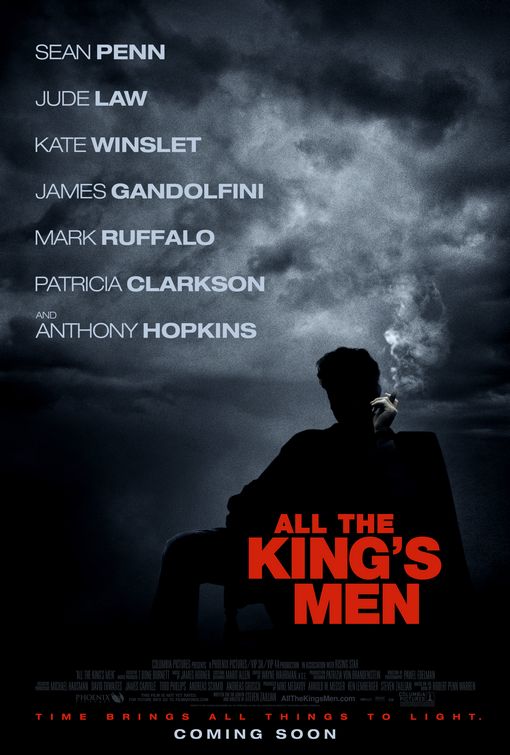 ALL THE KING'S MEN is a brilliant tragedy. The story is based on a Pulitzer Prize winning book by Robert Penn Warren, which was made previously into a brilliant Oscar-winning movie in 1949. Sean Penn stars as Willie Stark, an idealistic politician in rural Louisiana who talks in biblical terms. A political henchman, Tiny, played by the overweight James Gandolfini, sweet talks Willie into running for governor as the candidate of the people. In the midst of his run, Willie finds out that he's being used. His idealistic virtue snaps. From that point, Willie decides, he's going to be the user. Willie starts promising the people more and more goodies. Although he is married, he starts chasing after other women. Corruption reigns, sin abounds, and Willie explicitly helps us understand all that. Eventually, ALL THE KING'S MEN cannot put Willie Stark together again.

ALL THE KING'S MEN is the first great movie of 2006. The storytelling, the dialogue, the camerawork all work together to engage heart, mind and soul. The movie has a very strong Christian worldview set in a fallen world where sin abounds. Thus, MOVIEGUIDE® advises extreme caution.

(CCC, BBB, ACACAC, H, Ab, LLL, VV, S, NN, AAA, D, M) Very strong Christian worldview includes lots of shots of crosses and churches and two funerals with explicit Christian content with very strong moral elements and very strong implied criticism of socialist politicians with a demagogic Democrat, Huey Long character who invokes God explicitly, a writer who questions God and characters who are immersed in a Christian worldview where sin abounds; 24 obscenities, seven profanities but many not intended profanities but many are invoking God's name by the demagogue; Golden Age of Hollywood type violence seeing the aftermath of a man's suicide, a destroyed piano, a woman slaps a man, leading up to a violent shootout in the Louisiana statehouse with the blood of the killer commingling with the blood of the demagogue politician; discussions of sex discussions of infidelity and adultery and one scene where a woman lies in bed naked though nothing can be seen and man refuses for have intercourse with her; full female nudity but done in shadows with no body parts shown, two nightclub dancers but both wear halters and panties; constant alcohol use, often to get drunk; smoking; and, politicians defraud populace and promise them everything.

ALL THE KING’S MEN is a brilliant tragedy, reminiscent of Shakespeare’s best. The storytelling, the dialogue, the camerawork all work together to engage heart, mind and soul. The story is based on a Pulitzer Prize winning book by Robert Penn Warren, which was made previously into a brilliant Oscar-winning movie in 1949. Robert Penn Warren’s book was a veiled attempt to expose demagogues such as Huey Long, the flamboyant Governor and Senator of Louisiana in the 1930s. This new version is so well directed by screenwriter Steven Zaillian that everyone in it looks like a great actor.

The movie opens with the Huey Long character, Willie Stark, played brilliantly by Sean Penn, being driven by his gunman, Sugar Boy, to a judge’s house to intimidate him to stop an impending impeachment. In the backseat is Jack Burden, a brilliant, handsome young writer played by Jude Law, who has become an accomplice of Willie Stark.

Jack takes us back to five years earlier. In the process, he tells us that an idealist refuses to see what he doesn’t want to see, setting up the premise of the story, that idealism eventually destroys itself.

Jack interviewed Willie when he was a small-time treasurer in Macon City. Willie is committed to doing the right thing. He’s a teetotaler and talks in biblical, scriptural terms about the graft involved in a school building project. He loses the election, however. Then, the school he opposed is built by graft and corruption, and three children are killed when a staircase collapses due to shoddy workmanship. A political henchman, Tiny, played by the overweight James Gandolfini, sweet talks Willie into running for governor as the candidate of the people. In the midst of his run, Willie finds out that he’s being used by the political power brokers. His idealistic virtue snaps. From that point, he’s going to be the user. Jack tells Willie he has to throw away his prepared speeches and talk from the heart. Willie gives one of the greatest political speeches in movie history, promising to give the poor, the downtrodden hicks what they’re due. He is swept into office by a landslide.

Willie hires Jack to manipulate the wealthy for him and hires Tiny so that he can continue to embarrass him. Willie’s mistress, Sadie, has delusions that Willie, although he is married to a straight-laced schoolteacher, that he loves her. Willie gets attracted to dancehall and nightclub women. He starts promising the people more and more goodies. When he’s asked where he’s going to get the money to pay for it, he points to the board of Standard Oil Company and the other rich fat cats in the state of Louisiana.

Soon, Willie is up on charges of impeachment. His toughest opposition is a no-nonsense judge, Irwin, played by Anthony Hopkins. Irwin appears to be pristine. Jack, meanwhile, is haunted by his love for his childhood sweetheart, Anne Stanton, played by Kate Winslet. Evidently, Anne hurt him badly. How? By offering herself to him completely naked on a bed, which he refuses because he wants something more.

Anne becomes one more of Willie’s lovers. Anne’s brother, Dr. Stanton, whose purpose in life is to help others, is used by Willie as a front for a public works hospital project.

For anybody who doesn’t know the true story of Huey Long, or who did not see the original movie, we’ll just leave it that the center cannot hold, corruption reigns, sin abounds, and Willie explicitly helps the audeince understand all that. Eventually, ALL THE KING’S MEN cannot put Willie Stark together again.

On one level, ALL THE KING’S MEN is a powerful indictment of socialist demagoguery, promising the people anything to get power. One must remember that Huey Long was a Democrat and although his character resembled a small-time Adolf Hitler or Mussolini, it also reflected many other career, corrupt politicians of the era. It’s interesting that James Carville is one of the executive producers. One wonders whether he saw the sexual dalliances and vacuous promises of Willie Stark reflected in the President he helped elect, Bill Clinton.

On another level, this is one of the best insights into human nature, and its innate sinfulness, ever brought to the big screen. The dialogue is so profound and poignant as it reveals deep-set human character traits that one wants to see the movie again and again to catch every nuance. These people are bright, yet deluded. They are blind to their failings, and yet brilliant in other ways.

ALL THE KING’S MEN is the first great movie of 2006. It may not do great box office. It is a tragedy. And, it has some tough elements. But, whether it does extraordinary box office or not, it is worth watching for older audiences.