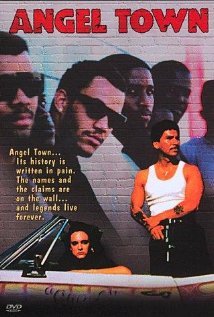 Obscenities and profanities; nudity and fornication; violence, rape and murder; and, extortion, blackmail and revenge.

When Jacques Montaine, a visiting French university graduate student, rents a room in a rough part of Los Angeles, he finds that he must confront a vicious Chicano street gang that is terrorizing the landlord and her young son, Martin. The gang’s leader, Angel, wants Martin to become a gang member himself, as a replacement for a gang member killed in a shootout with Martin’s father.

Jacques, who happens to be a world-class karate champion, is thrust into the role of protector for Martin and his family, and much violent street fighting ensues. He also encourages Martin to fight back and to avenge his father’s murderer. The gang, meanwhile, continues to terrorize, literally frightening Martin’s grandmother to death.

Stashing Martin in his friend’s karate school for safekeeping, Jacques goes after Angel and his barrio thugs. They attempt to gun him down on campus, but just end up shooting innocent students. In a final siege at the house, Jacques thrashes Angel and his punks to within an inch of their lives, but leaves the final act of avenging to Martin.

Violence and obscenities litter the film. Abhorrently, even child gang warfare is depicted. Extortion, blackmail, murder, rape, nudity, and fornication are also present. Revenge is lifted up as a noble cause and as the way Martin can earn his manhood — a thoroughly repugnant notion. Surely films can’t get any worse than this.

RECOMMENDED ACTION: Please contact the distributor with your comments. Your letters make a difference!