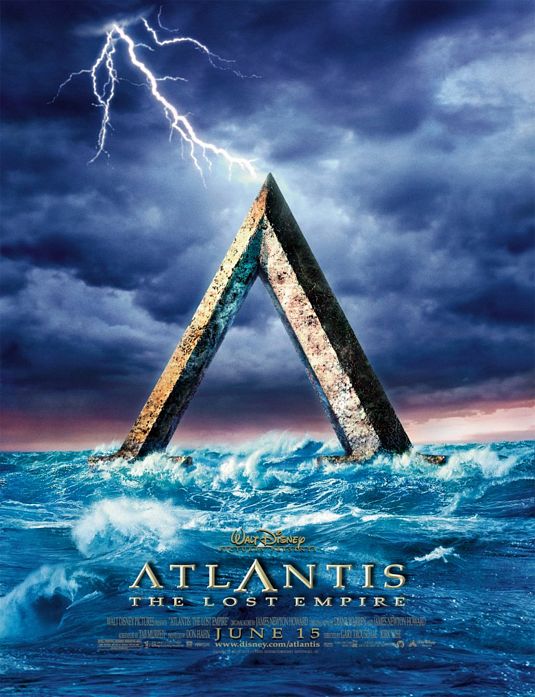 The animated ATLANTIS: THE LOST EMPIRE is a unique blend of art, music, story, and characterization. The story follows Milo Thatch, a slightly naive linguistics expert, and a colorful band of explorers. Milo’s quest leads them to the depths of the ocean floor to find an ancient civilization which, at the height of its glory, was swept away without a trace by a giant tidal wave thousands of years ago.

ATLANTIS overwhelms the imagination with its sometimes stunning visual and auditory impact and with plenty of action. Voice, writing and artistic talent combine to engage the audience. The depth of the characters adds to its emotional power. The movie teaches the value of honor, compassion and relationships. A solid moral tone pervades much of the film, which also includes a crucial scene where the hero appears to pray at one point. Regrettably, the movie also borrows from some occult, pagan theories about Atlantis being an advanced civilization powered by special energy crystals which the people worshipped. This gives the movie a confused, pluralistic worldview. This is another sign of the pluralistic paganism of our age, which tries so hard not to offend the sensibilities of non-Christians.

Walt Disney Picture’s animated story of the search for the legendary Atlantis is a unique blend of art, sound, music, story, and characterization. Guiding this colorful graphic journey to exotic locations is Producer Don Hahn and Directors Gary Trousdale and Kirk Wise. Hahn worked on THE LION KING. All three worked on BEAUTY AND THE BEAST and THE HUNCHBACK OF NOTRE DAME. Presented in CinemaScope, ATLANTIS: THE LOST EMPIRE is the biggest animated effects movie in Disney’s history, and Disney’s first step into the animated action-adventure format. As such, it conjures up positive allusions to such live-action classics as TREASURE ISLAND, TWENTY THOUSAND LEAGUES UNDER THE SEA, SWISS FAMILY ROBINSON, and JOURNEY TO THE CENTER OF THE EARTH.

Regrettably, however, ATLANTIS: THE LOST EMPIRE uses occult elements regarding the myth of Atlantis. These elements, which appear in the second half of the movie, have led many people astray. The directors have admitted they selected the elements from some of the occult trances of the so-called “Sleeping Prophet,” Edgar Cayce, a heretical spiritualist. Although they have deliberately left the elements somewhat vague, this makes the movie a problematic work. It is important to note, however, that, in an interview with MOVIEGUIDE®, Producer Hahn indicated he believes viewers should treat these elements in a symbolic way, a possibility which will be discussed later in this review.

Set in 1914, the story in ATLANTIS focuses on Milo Thatch (Michael J. Fox), a museum cartographer and linguist, who dreams of following his grandfather’s quest to find Atlantis, a supposedly “advanced” civilization which at the height of its glory several thousands of years ago was swept away by a giant tidal wave, leaving no trace. Milo seeks the mysterious Shepherd’s Journal which supposedly has clues to the whereabouts of Atlantis. The journal appears in the possession of eccentric billionaire Preston B. Whitmore, who knew Milo’s grandfather and wants to exonerate his theories about the Journal and the reality of Atlantis, which may just be an elaborate myth cited by the Greek philosopher Plato.

Whitmore funds an expedition and re-gathers the team of explorers who found the journal in Iceland. The explorers are led by Commander Rourke (James Garner), but it is Milo, with his linguistic expertise (his “knowledge of gibberish,” as Whitmore says), who is entrusted with the success of the expedition. Only he can translate the Antlantean language in the Shepherd’s Journal.

The team launches the journey in a state-of-the-art submarine named “Ulysses” (even though it’s 1914!) and soon encounters Leviathan, the mechanical sea monster that guards the entry to Atlantis. The modern sub is no match for the monster, and the team is on its own in an undersea world of caves, where they have salvaged some vehicles and digging tools. The vehicles, tools and Milo’s ability to decipher the Atlantean language are their only hope of discovering the lost civilization.

Using the journal and some ingenuity, they discover a crippled kingdom and meet the ancient king, his grandaughter, Princess Kida, and the Atlanteans who have mysteriously survived for thousands of years. Princess Kida and her young visitor explore the kingdom, with Milo interpreting the inscriptions which Kida cannot read. They uncover many secrets about Atlantis, and Milo discovers that all is not as it seemed with this expedition. That’s when the real action and adventure begins.

ATLANTIS: THE LOST EMPIRE may totally absorb the imaginations of children with its stunning visual and auditory impact. The mammoth use of CinemaScope showcases the talents of Art Director Dave Goetz (HUNCHBACK OF NOTRE DAME), comic artist Mike Mignola, and 350 other artists, animators and technicians. The action sequences and the sequences involving the exploration of the undersea caves are the most exciting and exquisite. The rest of the movie, including the visualization of crippled Atlantis, sometimes has the feel of a Saturday morning cartoon rather than an animated feature-length movie, however.

The theme of the movie is, “Our lives are known by the gifts we leave our children.” Thus, Milo has remembered the legacy of his grandfather, who was obsessed by the mystery that is Atlantis. Milo wants to redeem his grandfather’s legacy by proving that his theories were correct. The Atlanteans, however, have forgotten the legacy of their ancestors. In fact, viewers learn that Princess Kida’s grandfather has hidden that legacy away, out of shame for the way he had abused that legacy in the past. His abuse actually caused the destruction of Atlantis thousands of years ago. Milo helps Princess Kida and the other Atlanteans re-discover that legacy.

Regrettably, this is where the occult elements from Edgar Cayce truly begin in the movie. Without giving the whole ending away, the movie reveals that the artifact behind the legacy of Atlantis not only holds tremendous physical energy, it also holds some kind of spiritual power. The filmmakers are purposely vague about what exactly that spiritual power entails, although it becomes clear that it is able to heal wounds and has kept Princess Kida alive for thousands of years. In fact, in one shot, Princess Kida appears to worship the artifact that contains the legacy of Atlantis, although the other people around her do not.

In our interview with him, Producer Hahn said the power behind the legacy of Atlantis was left purposefully vague or mysterious so that it could fulfill a symbolic function rather than a literal function. That does not change the fact, however, that he and the other filmmakers have used occult elements from Edgar Cayce’s “messages” on Atlantis. Instead of this occult feature, they could have used a more science fiction approach to the revelation of the mystery of Atlantis. The filmmakers told MOVIEGUIDE® that they didn’t want to stress either the occult aspect or the science fiction aspect behind their vision of Atlantis, for fear of limiting the full effect of that vision. What they have done, however, is confuse the whole issue regarding the myth of Atlantis. They have also given the movie a pluralistic worldview, which is an eclectic pagan worldview. Thus, although ATLANTIS includes harmful occult elements, it also includes moral and religious elements, including a brief shot of Milo apparently saying a brief prayer before he makes a physical “leap of faith” and at least one reference to God. Those positive elements also contain an emphasis on ethical values, such as keeping one’s word, compassion, right and wrong action, teamwork, the importance of honoring one’s family and cultural legacy, and comments against human greed when it endangers the lives of people. This combination of negative and positive elements results in a clash of worldviews which is not resolved in a satisfying way.

MOVIEGUIDE® urges viewers, therefore, not to be confused by the messages in ATLANTIS, but to exercise discernment as they enjoy the action, adventure and comic relief with which the filmmakers have also imbued their movie.

EDITOR’S NOTE: No matter how good ATLANTIS: THE LOST EMPIRE is, in every sense of the word “good,” parents should exercise some caution, because the very concept of Atlantis has been used for centuries to promote occultism and paganism. The occult has its own theology of “good and evil,” and the myth of Atlantis can embody this theology which is abhorrent to God. On the other hand, many of the people behind ATLANTIS: THE LOST EMPIRE are confessing, committed Christians (including our friend, Producer Don Hahn and the man who drew and supervised the characterization of Milo, John Pomeroy), and these key people have tried to shape this movie into a positive, moral story. However, please discuss the myth of Atlantis with your children so that they understand that this is just a movie fantasy.