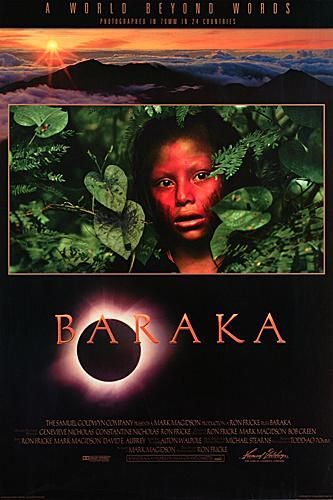 BARAKA is a wordless documentary, photographed in the crystal clarity of 70mm Todd-AO, which attempts to communicate a Rousseauian noble-savage worldview by illustrating the conflict between primitive spirituality and man-made-urban decay. While the imagery is at times gorgeous, much of the film emphasizes poverty, despair and homelessness. BARAKA is depressing because of a fair amount of disturbing and oppressive imagery.

The title BARAKA is derived from a Sufi word designating the essence of life and its evolutionary processes. The film bearing this title is not a celebration of God’s presence on earth, even though it strives to present spiritual themes. The film shows worshipers in all parts of the world: at the Wailing Wall, in cathedrals, at Mecca, and in Buddhist temples. The film also reveals urban blight and decay: poverty-stricken children, oppressive factories, surging streams of cars, prostitutes, high-rise tenements, and homeless people sleeping on the street. Then, the camera photographs weapons, empty jail cells, ruined concentration camps, piles of skulls, and the immolation of a corpse along the Ganges River.

Completely wordless, though accompanied by hypnotic, persistent (and at times intrusive) New Age-style music, BARAKA presents some startling imagery whose impact is enhanced by the crystal clarity of 70mm Todd-AO photography. Many of the images shown are dismal; there are no weddings, no births, no happy children, and no civilized cities. Also, Christian worshipers are given little time on screen compared to those from Eastern or primitive traditions. Despite its frequent visual splendor, BARAKA overall is depressing because of a fair amount of disturbing and oppressive imagery.

Rating: Not rated by MPAA (However, this is not a film for children)