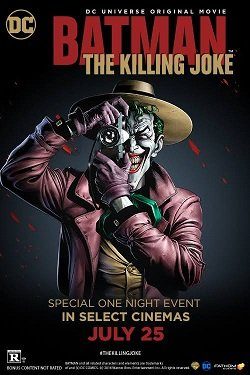 BATMAN: THE KILLING JOKE is a dark animated version of a 1988 Batman comic book, which brought an edgy flair to Batman, Batgirl and the Joker. In the story, Barbara Gordon a.k.a. Batgirl woos Batman after fighting the nephew of a mob boss, but Batman distances himself from Barbara, and she retires. The Joker escapes prison, shoots Barbara in the stomach, paralyzing her, and kidnaps her father, Commissioner Gordon. The Joker gives Batman a clue to where he’s holding the Commissioner. Meanwhile, the back stories of how Barbara Gordon became Batgirl and how the Joker evolved from an innocent, desperate comedian into an arch villain are shown in flashback.

BATMAN: THE KILLING JOKE is impressively drawn and well written. It has flashy action sequences and terrific vocal work, particularly by Mark Hamill as the Joker. However, it’s disconcerting to see extreme violent behavior depicted in animated form, especially Joker’s brutal crippling of Barbara Gordon. The Joker humiliates Commissioner Gordon to drive him insane, though the Commissioner maintains his sanity and moral code. MOVIEGUIDE® advises extreme caution for the R-rated BATMAN: THE KILLING JOKE.

(B, RoRoRo, PaPaPa, Ho, L, VVV, SS, N, DD, M) Light moral worldview overall where Batman fights for good and justice and shows mercy, and a humiliated Commissioner Gordon maintains his moral code, but marred by very strong Romantic, pagan elements, plus there’s a minor homosexual character; five obscenities and three strong profanities, with several uses of alternatives to the “f” word like “friggin”; very strong and strong, sometimes bloody and brutal violence includes blood spurts when Joker purposely aims a gun to shoot Batgirl directly in the stomach, and she becomes paralyzed, numerous gun battles and hand to hand combat fights, shootouts result in numerous dead people and blood flying all over, Batman stops a bank robbery, a couple car chases, police commissioner is kidnapped and beaten, commissioner is also humiliated by being stripped naked and led around by a chain from a collar, while forced to watch images repeatedly that are designed to drive him insane; strong sexual content overall includes implied fornication scene, and Joker’s minions dress in sexually perverse S&M-style outfits while terrorizing the commissioner; upper male nudity and cartoon female seen in bra before implied fornication, and young woman says, “It was just sex”; no drinking; no depicted smoking or drugs but it’s implied the Joker gives LSD to a kidnap victim to drive him insane; and, villain is very callous, villain has a blatant disregard for authority and law enforcement, final scene is morally ambiguous.

BATMAN: THE KILLING JOKE is a dark, adult animated version of a Batman story, which follows Batman as he races against time to find villain The Joker after he kidnaps Gotham’s police commissioner. It includes the development of Batman’s relationship with Batgirl. Based on an edgy comic book published in 1988, BATMAN: THE KILLING JOKE has a moral worldview overall marred by strong Romantic, pagan and lewd elements requiring extreme caution.

Batman’s city of Gotham is undergoing a crime spree by the Joker and his minions, as they rob banks and terrorize the city. When the Joker kidnaps Police Commissioner Gordon, Batman knows the Joker has crossed the line and springs into action to save the Commissioner.

Meanwhile, the Commissioner’s daughter, Barbara, is running around the city as Batgirl, trying to help Batman, while also trying to woo him. He keeps dismissing her because of her youth and the fact that their vigilante work is so dangerous, but their attraction is sexually charged nonetheless.

Throughout, the backstory of how Barbara became Batgirl and how the Joker evolved from an innocent, desperate comedian into an evil arch villain are shown in flashback.

BATMAN: THE KILLING JOKE is impressively drawn and well-written, with flashy action set pieces and terrific vocal work by all the actors, particularly Mark Hamill as the Joker. However, it’s disconcerting to see such violent behavior depicted in animated form, particularly when the violence becomes bloody and when Barbara Gordon is cruelly crippled.

In addition, some scenes where the Commissioner is subjected to bizarre sexual costumes worn by himself and the Joker’s minions make this animated feature movie inappropriate for children and teenagers. All told, BATMAN: THE KILLING JOKE is well made, but the most objectionable content merits extreme caution, even for adult moviegoers and viewers.