BIRD ON A WIRE 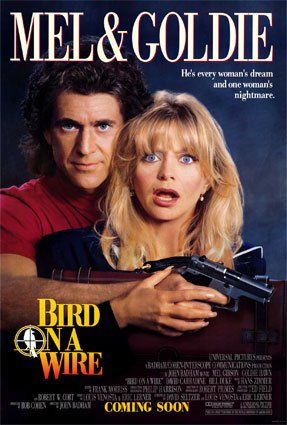 Ex-hippie Rick Jarmine has been hiding out for the last fifteen years under the Federal Witness Relocation Program. Trying to buy marijuana in Mexico, Rick was responsible for putting Diggs and Sorenson, two crooked DEA agents, behind bars. However, as the movie opens, Diggs, a well-known terror in the drug cartel, is being released from prison and swears to kill the guy who reported him.

Now working as a gas station mechanic, Rick coincidentally bumps into Mary Anne, his former fiance, who knew him under a different identity, and whom he had to leave at the altar to go into hiding. Suddenly, Diggs and Sorenson arrive. They tracked Rick down by blackmailing an FBI agent into supplying his whereabouts.

Rick and Mary Anne are plunged into a cross-country run for their lives, with one harrowing escape after another. Through the half-dozen false identities Rick has maintained, they find temporary refuge in places he has worked, be they in a hair salon or zoo. There are many instances of violence, from machine gun fights to car smashes.

Naturally, the two ex-lovers’ flame is rekindled, with humorous twists, as the two have grown to be total opposites. That they have nothing in common, save a large dose of passion, seems to be Hollywood’s way of portraying romance when, in fact, it’s hardly the substance of real life and lasting relationships. This is unfortunate for young people who can be easily influenced by the constant misrepresentation.

This a fast-paced movie that has some interesting scenes with animals and many harrowing adventures. In one sequence, a rope ladder breaks, dropping Rick in with some crocodiles. He recovers, only to dangle precariously above a tiger pit. Diggs, meanwhile, is gruesomely electrocuted. Extreme caution is recommended because BIRD ON A WIRE contains: violence; obscenity; a sexual liaison complete with partial nudity that occurs when Rick and Mary Anne check into a motel; and, the impression Rick gives that he hasn’t learned anything from his experience of trying to buy drugs in Mexico.