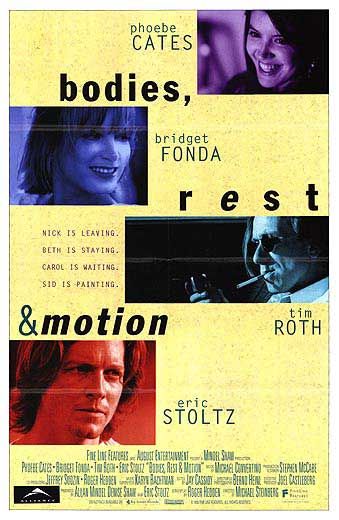 BODIES, REST AND MOTION--a title derived pretentiously from one of Newton's laws of physics--is a very thin slice of life concerning four people who badly need to get a life. Rootless, clueless, amoral and self-absorbed, the twenty-something characters in this one-act play are so lacking in understanding that even an abrupt, unresolved ending comes as a relief.

BODIES, REST AND MOTION–a title derived pretentiously from one of Newton’s laws of physics–is a thin slice of life concerning four people who badly need to get a life. Beth (Bridget Fonda) and her shiftless boyfriend Nick (Tim Roth) are about to leave an Arizona suburb. The move is Nick’s idea. So is stealing a TV set from the electronics store which just fired him. So is nuzzling with Beth’s best friend Carol. Nick is so self-absorbed that he takes off while Beth is still packing. Beth rebounds into the bed of Sid, a handyman. Then, Beth realizes that her life has become a string of affairs, and so she gets in the car and takes off, without any destination. Coming back to find Beth gone, Ned cusses a blue streak. Sid takes off to search for Beth, with whom he has yet to have an intelligent conversation.

All four characters are so rootless and so casual about sex, drugs, booze and theft, and so lacking in understanding about much of anything that even this abrupt, unresolved ending comes as a relief. BODIES, REST AND MOTION represents a fair amount of skill expended on characters who are exasperating even in their self-induced sorrows.