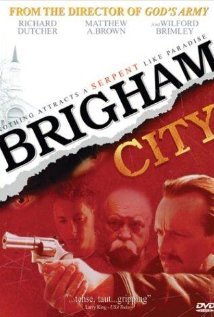 BRIGHAM CITY is a weird tale of guilt and sin from a Mormon company. Wes Clayton is sheriff of a sleepy Mormon town in Utah. One day, he and his young deputy, Terry, find the body of a California woman murdered by an unknown assailant. As the death toll mounts, the townspeople start to distrust everyone. Wes, who’s one of the town’s 17 Mormon bishops, begins to doubt his own ability to protect the people under his care.

Richard Dutcher, director and writer of BRIGHAM CITY, gives an excellent performance as Sheriff Clayton. His direction of the movie is generally good. The revelations of murder, guilt and hidden sin, however, are somewhat creepy, and the religious themes and movie’s premise are not quite clear. What does seem clear, though, is that the movie teaches salvation by works, not salvation by grace through faith in Jesus Christ. Of course, the god of Mormonism, who is actually one god among many, is not the same one as the God of the Bible. As God says in Isaiah 44:6, “I am the First and I am the Last; Besides Me there is no God.”

(PaPaPa, FRFR, B, L, VV, S, A, D, M) Pagan worldview about serial killer invading a sleepy Mormon town with counterfeit religious elements & some moral elements, including references to god & Jesus, but which god? & whose Jesus?; 7 mild obscenities & 1 mild profanity; strong off-screen violence, showing some blood, such as police find female bodies of serial killer, killer shoots one man & hero shoots killer in movie’s most violent scene; character affirms killer sexually molested one victim & man hides pornography in a closet; no nudity but photo of woman in underwear; alcohol use & police visit bar to get fingerprints from suspects; smoking; and, kidnapping, salvation by works, lying, & movie is genuinely creepy, which is weird for a religious movie.

BRIGHAM CITY is a weird tale of guilt and sin from a Mormon production company. It has an oppressive atmosphere that not only comes from its pagan Mormon worldview but that also derives from its subject matter – the search for a serial killer who invades a sleepy Mormon town in rural Utah.

Richard Dutcher, who also produced, wrote and directed this movie, stars as Sheriff Wes Clayton of Brigham City, Utah. Sheriff Clayton still feels depressed by the death of his wife and son by a drunk driver a year earlier. One day, just before the town’s birthday celebration, he and his young deputy, Terry, find the body of a California woman murdered by an unknown assailant. Wes wants as little to do with solving the crime as possible, much to the chagrin of Terry. He calls in the local FBI to take care of the case.

The day after the town’s birthday celebration, however, Wes finds the queen of the celebration, Miss Brigham City, murdered, her dead body hidden under the gazebo in the city’s main park. This brings the killer closer to home and leads Wes to question the disappearance of another young woman, who supposedly left for Hollywood to take up an acting career. Obviously, a serpent has invaded this little Mormon “paradise.”

As the death toll mounts, the townspeople start to distrust everyone. A house to house search for a teenage girl who turns up missing reveals the disgusting sin of one of the townspeople. Wes, who’s one of 17 Mormon bishops in Brigham City, begins to doubt his own ability to protect the people assigned to his care.

Richard Dutcher, the director and writer of this movie, gives an excellent performance as the town sheriff. His direction of the movie, and the rest of the actors, which include the venerable Wilford Brimley as the previous sheriff, now retired, is generally good. It isn’t always clear, however, what messages BRIGHAM CITY is trying to send, despite the obvious “Serpent in Paradise” theme. This is especially true in the movie’s cryptic last scene, where Wes, apparently still feeling guilty about his failure to protect the citizens, refuses to take the Mormon communion bread until the brother of one of the killer’s victims insists.

Although it isn’t clear in this scene what Dutcher intends to convey, the scene conveys to MOVIEGUIDE® the false, works righteousness of Dutcher’s pagan worldview. Contrary to the implications in this scene from BRIGHAM CITY, true communion is not a burden to remind us of our guilt and our shame, but a release from our guilt and our shame, through the sacrifice of Jesus Christ, who died for our sins.

Of course, Mormonism not only teaches salvation by works, it also teaches that male members of the Church of Jesus Christ of Latter-day Saints can become gods of their own planet. Mormonism also teaches that both God the Son and God the Father have physical bodies, and that the Holy Ghost is only a spiritual manifestation of God, not a third distinct person in the Holy Trinity. Mormonism also teaches that the universe is eternal, a pagan belief if ever there was one. Most importantly, however, Mormonism teaches that Jesus was not God from eternity and is not one in nature, essence and substance with the Father and the Holy Spirit. To worship the God of Mormonism, therefore, is not to worship the God of the Bible, but to worship a false God and a false Jesus. As God says in Isaiah 44:6, “I am the First and I am the Last; Besides Me there is no God.”

Thus, even though there are prayers to Jesus and the Father in BRIGHAM CITY, and even though one character is baptized “in the Name of the Father, Son and Holy Spirit,” BRIGHAM CITY presents a counterfeit version of Christianity. Furthermore, the subject matter of the movie, a serial killer on the loose, is presented in a very creepy manner. The revelations of murder, guilt and hidden sin that occur in the movie will offer no real comfort for those viewers who have accepted the one true Jesus Christ as their Divine Savior.