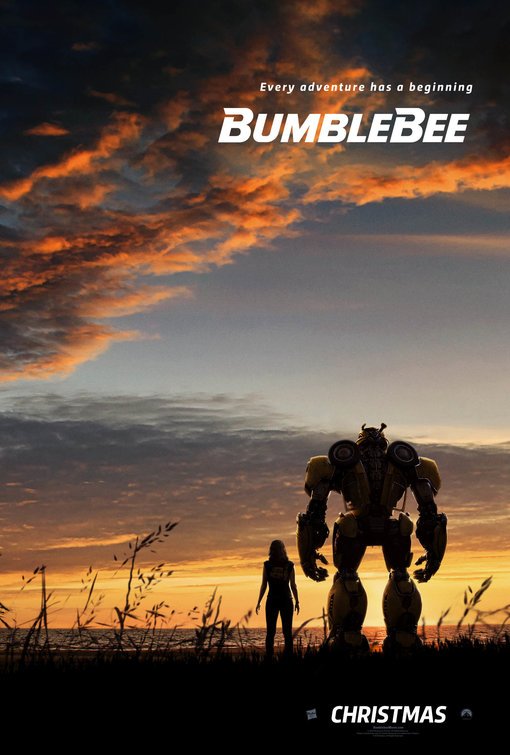 BUMBLEBEE is an action-packed origin story about the friendliest Transformer, combined with a teenage angst story about a girl named Charlie who’s lost her father and become alienated. Optimus Prime orders Bumblebee to hide out on Earth from the Decepticons. Charlie befriends Bumblebee, but two Decepticons and a human scientist convince the Army Bumblebee is the villain. Battles follow, with Charlie in the thick of the action.

BUMBLEBEE contains a lot of fun action adventure, but it’s almost paint-by-numbers. A lot of imagination has gone into the movie. Some of the dialogue is clunky, some of it is hilarious. Hailee Steinfeld does a terrific job as Charlie. Some of the humor is at the expense of other people, however. Also, some battles are too intense, with good Autobots dismembered and cut in half. BUMBLEBEE also has too much foul language, including a lot of God talk that sometimes sounds positive. There are also some calls to revenge supposed wrongs, and the revenge isn’t pleasant. Eventually, everything comes together in a thrilling ending, complete with resurrection, baptism, renewed life, restored family, and restored relationships.

(C, BB, RoRo, PC, LL, VV, S, N, MM):
Dominant Worldview and Other Worldview Content/Elements:
Light Christian, strong moral allegorical worldview with two resurrections, forgiveness promoted, and baptism, with some Romantic teenage rebellion and angst that’s somewhat positively resolved and some politically correct elements;
Foul Language:
13 lightweight obscenities and 25 OMG and other light profanities (some sound like prayers, some sound like exclamations, and some sound like questions, so it deserves two “Ls” not three “Ls”);
Violence:
Lots of action violence (some of it intense but not bloody), with sentient robots cutting off other sentient robots’ arms, robots cut in half, girl gets tossed around in robot wars, boy has his arm in a sling after lots of robot battles, house gets trashed, chase scenes, vehicles demolished, major car crash stops bad guys, falls from great heights, lots of machine guns, shooting and missiles, explosions, etc.;
Sex:
Very light budding teenage romance plus woman’s boyfriend kisses her;
Nudity:
Upper male nudity a couple of times with girls starring at handsome teenage boy’s torso;
Alcohol Use:
No alcohol use;
Smoking and/or Drug Use and Abuse:
No smoking or drugs; and,
Miscellaneous Immorality:
Some mocking of the gung-ho military but military comes around at the end, issues of bad parenting, issues of lack of trust, some teenage angst and rebellion, Bumblebee robots takes things too literally and destroys property.

BUMBLEBEE is an action-packed origin story about the friendliest Transformer, combined with a stereotypical teenage angst story about a girl named Charlie who’s lost her father, rejected her own talents and become surly and alienated. BUMBLEBEE is a hyped up, exciting battle for control of the universe, filled with a lot of Transformer action violence and too much foul language, including a lot of God talk, which sometimes sounds positive.

The movie starts on the planet Cybertron where the Autobots are being defeated by the Decepticons. Optimus Prime says, if the Decepticons win, they’ll destroy the whole universe. So, he sends Bumblebee to Earth to make a place in the universe where the Autobots can hide by Bumblebee befriending and protecting human beings. In the process of getting away, Bumblebee loses some of his memory in hand to hand combat. Also, after another battle later in the movie , he loses his voice and has to replace his speaking by selecting music from radio stations on his car radio.

Meanwhile, Charlie, a young girl in a suburb of San Francisco, is becoming more and more alienated from her friends and family. Her best friend, her father, has died, and her mother Sally now has a boyfriend, Ron, who seems to be living with her apart from marriage. Her mother and boyfriend favor Charlie’s little brother. Charlie also doesn’t fit in at school, but she does have a secret admirer, a Hispanic boy named Memo.

Everybody in the family patronizes Charlie’s feelings about her father. She gets angry at her mother, saying, “You can move on from the death of my father, but I can’t.”

Charlie is trying to repair an old sports car she was working on with her father. She repeatedly asks her mother for a car, but her mother gives Charlie a helmet and tells her to use her bicycle.

Bumblebee arrives on Earth like a burning meteor and then gets attacked by a gung-ho, security forces agent named Burns, who calls in the troops to destroy Bumblebee. Bumblebee gets severely trashed by the battle and hides out in a junkyard disguised as an old VW Beetle. This is the same junkyard where Charlie gets parts for her car. She sees the yellow Volkswagen and, on her birthday, asks the junkyard owner if she can have it. He gives it to her, and she goes home, she puts the VW into the garage and then finds out the VW is an Autobot. Charlie and the Autobot become fast friends, with her calling the Autobot Bumblebee, or just Bee for short.

All sorts of problems arise as Charlie tries to hide Bumblebee. Her mother takes the VW one day, and Charlie must ride her bicycle to retrieve Bumblebee before her mother finds out he’s an Autobot. Memo finds out about Bumblebee, however. Charlie repairs Bumblebee several times. When they go to a beach party, the prettiest girls make fun of her. So, in one of the most regrettable scenes in the movie, later that night, Charlie takes Memo and Bumblebee to TP the teenage girl’s house and egg her car, and Bumblebee gets carried away and destroys the girl’s expensive car.

Meanwhile, two Decepticons are searching for Bumblebee to destroy the Autobots. They come to Earth to face a standoff with Agent Burns. However, they deceptively befriend a gullible scientist who’s delighted to meet an alien space creature. The scientist convinces the Army to let the Deceptions use the Earth’s rudimentary computer systems and satellites to contact their home. Of course, they just want their fellow Decepticons to come and destroy Bumblebee and the Earth.

The Decepticons convince the Army that Bumblebee is the villain. A series of battles with Bumblebee follow, with Charlie and Memo helping Bumblebee.

BUMBLEBEE contains a lot of fun action adventure, even though it’s almost paint-by-numbers. A lot of imagination has gone into the movie. There’s also humor, but some of it is regrettably over the top at the expense of other people, as well as at the expense of Charlie’s home. Regrettably, some of the battles seem too intense, with good Autobots being dismembered and cut in half. There are also some calls by Memo to revenge supposed wrongs, and the revenge is not pleasant. Eventually, however, everything comes together in a thrilling ending, complete with resurrection, baptism, renewed life, restored family, and restored relationships.

Hailee Steinfeld does a terrific job as Charlie. John Cena is his over the top militaristic self. Some of the dialogue is clunky, some of it is hilarious. The bottom line is that this is a teenage angst movie, of which there have been many in the history of movies that follow the same alienated, semi-orphan teenager on their road to redemption, with the help of a big strong guy, who in this case is a Transformer.