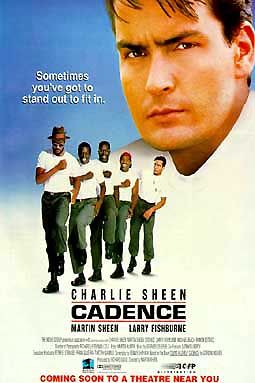 Over 50 obscenities, profanities, murder and violence, some drinking and drunkenness, racial slurs, and theft

Although the film CADENCE, set in Stuttgart, Germany in the mid 1960’s, offers themes of love, forgiveness and reconciliation, it unfortunately contains numerous obscenities and profanities, which detract from its principled message.

As the film opens, Private Franklin Bean (Charlie Sheen) weeps over the coffin at his father’s funeral as he says, “I’m sorry, Dad.” Returning to the army base in Germany where he is stationed, Bean has his hands tattooed, gets drunk, goes berserk in a bar, and hits an M.P. The offense lands him in the base jail with a fairly light sentence, but his belligerent ways lengthen his stay.

The jail term, though, turns out to be the making of Bean. Rough, tough, Sergeant-in-charge Joe McKinney (Martin Sheen) proves to be one of the instruments which transforms the sullen, rebellious private into a warm, considerate human being. Taking an instant dislike to Bean, McKinney determines to bring him into line. Bean, on the other hand, consistently refuses to call McKinney “Sergeant” and challenges him with his insubordinate remarks. The punishments for his behavior mount up.

Bean’s prison mates, five black capital offenders, also take their cut at the private. At first, they belittle and ostracize Bean as a snobbish, know-it-all white boy. After that, they take advantage of him by going through his personal belongings. Webb, one of the inmates, steals Bean’s Zippo lighter, and in the ensuing skirmish, Webb’s fist connects disastrously with Bean’s eye. When questioned the next day by McKinney, Bean shrugs off the incident as an accident.

Thus, the blacks begin to accept Bean in subtle ways, by including him in their work and play, and teaching him cadence, or rhythm, through their “chain gang” shuffle. Hence, the film’s title, CADENCE. At a subsequent church service, a black pianist picks up the film’s theme as he sings, “Give me time to right all the wrongs I’ve done.”

McKinney, on the other hand, is prejudiced, calls the blacks “niggers,” and is generally going off the deep end. So when he proffers friendship to Bean, Bean fires back, “You’re a bully, and I hate everything you stand for.”

To retaliate, McKinney sends the crew out half-dressed during the middle of a stormy night to the work-site, while shouting orders and brandishing his rifle. In the ensuing melee, McKinney deliberately shoots and kills a black inmate. Later, at the trial, Bean gives testimony that frees McKinney, and Bean’s black friends again ostracize him because they feel they have been betrayed.

McKinney, however, ends up in a psychiatric ward. Bean comes to visit, the apparent victor in the clash of wills. Thus, friendship proves stronger than prejudice, and in the next scene, as Bean departs for Vietnam, he watches his black friends do the “chain gang” shuffle. His stolen Zippo lighter is returned by Webb with conciliatory words.

CADENCE is a well-done movie with good acting and subtle, understated dialogue–except for the foul language. At its heart, there is the Christian message of love and forgiveness. Trust develops between the men, and they begin to enjoy each other’s company and friendship apart from the earlier walls of suspicion and distrust.

Biblically, Christians are admonished to “Be kind to one another, tenderhearted, forgiving one another, even as God in Christ forgave you” (Ephesians 4:32). Of course, while such forgiveness and trust are set forth in CADENCE, they are not really associated with the Christian message. Of significance, however, is how the language improves, as the friendship develops between Bean and his black cell mates, with humor and laughter replacing obscenity. The film closes with the black singer in the church service repeating “Lord, give me time to right all the wrongs I’ve done.”

Though MOVIEGUIDE cannot recommend CADENCE because of the obscene language, violence and drunkenness, suffice to say it is a well-executed, thought-provoking film that can prompt viewers not only to better understanding of other people’s actions, but also help them to re-evaluate their relationship to others. Since “cadence” means “a musical chord sequence moving to a harmonic close or point of rest,” CADENCE lives up to its title.