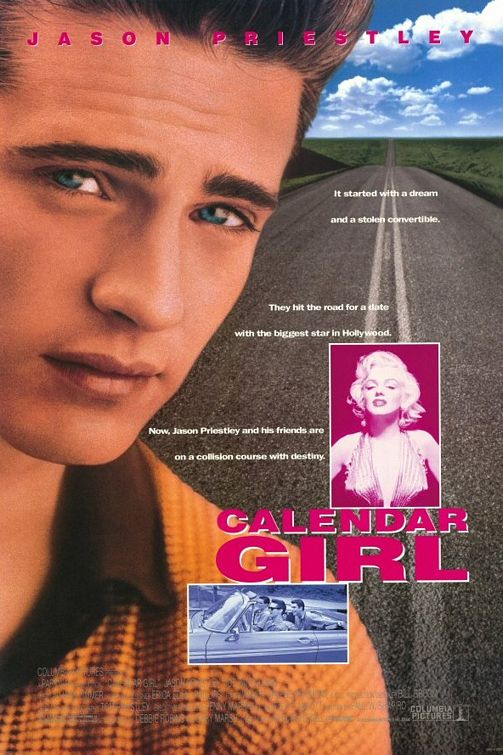 CALENDAR GIRL is a light comedy about three adolescents who pursue their dream of getting a date with Marilyn Monroe. CALENDAR GIRL is not an outstanding film, and is replete with crude sexual innuendos, nudity in the setting of a nude beach, mild violence, and occasional strong language, including profanity.

Thirty-one years after Marilyn Monroe’s death, Columbia Pictures has creatively starred her in a new movie called CALENDAR GIRL. The movie is a light comedy about three adolescents who pursue their dream of getting a date with Marilyn Monroe. Ned, Scott and Roy are three 18-year olds with raging hormones who have pored over photographs of their idol Marilyn Monroe since their youth. The boys store their sultry collection of photos beneath the cover of a “Holy Bible.” While is offensive, it reflects a truth: Hollywood has made a religion of sex and image. Roy inspires Ned and Scott to go out to Hollywood in a stolen (unbeknownst to Ned and Scott) car to find Marilyn and get a date with her. Their misadventures are both funny and tragic as they pour energy and resources into the pursuit of a goal that is fleeting and illusory.

Roy’s continual question, “Are we mice or men?” sets up the apparent premise of the movie. “Men” steal, use women for sexual pleasure, lie, and cheat; “Mice” act morally, prudently and miss out on life. Perhaps, one can only hope, CALENDAR GIRL, in a light-hearted way, is making a commentary on its own shallowness and failure to deliver what satisfies. Even if this was the case, CALENDAR GIRL is replete with crude sexual innuendos, nudity in the setting of a nude beach, mild violence, and occasional strong language, including profanity.