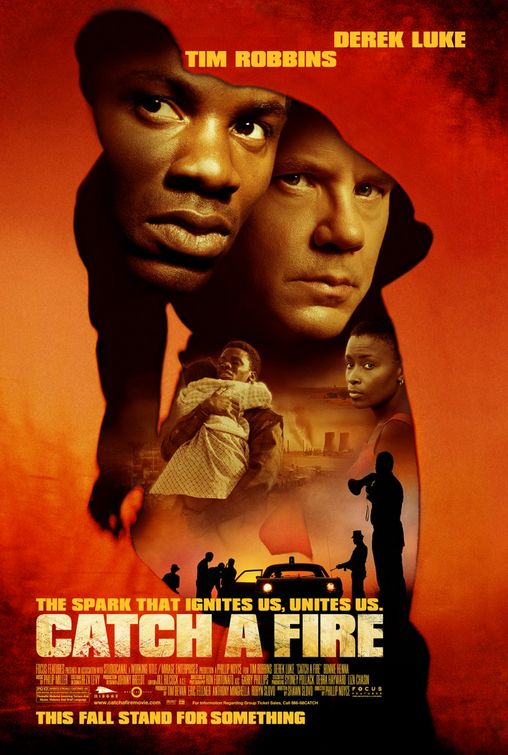 CATCH A FIRE is based on a true story. Set in the 1980s, the movie focuses on the life of Patrick Chamusso, an African from Mozambique who works at an energy producing plant in South Africa. Patrick tries to stay out of politics, but, when he and his wife are falsely arrested and abused, he decides to join the radical African National Congress and armed struggle against the racist white-led regime in South Africa. Patrick's first major mission is to bomb the energy plant where he used to work.

CATCH A FIRE is a well-done political thriller with good performances by Derek Luke, Tim Robbins and Bonnie Henna. The movie's ending tells an uplifting story about the need for forgiving one's enemies. Despite this and other positive aspects, the movie neglects to tell audiences about the socialist policies of the African National Congress, which now runs the Republic of South Africa. The movie also lauds the leader of the ANC's military wing, Joe Slovo. The movie doesn't mention, however, that Slovo was also leader of the South African Communist Party and his daughter wrote the screenplay for this movie.

(Pa, SoSo, RHRH, H, Co, B, C, L, VV, N, M) Light mixed pagan worldview with strong socialist, revisionist history and some humanist elements that hide the real Communist roots of one of the movie's historical heroes, with some moral elements opposing racism and a solid Christian message of forgiveness of one's enemies at the end, plus a family says a mealtime prayer; two "s" obscenities and one "h" obscenity; action violence with some blood includes explosions, police attack armed enclave with guns and small grenades or smoke bombs, people shot, police chase fugitive, police shoot people to death, policeman dunks arrested man repeatedly in river, police stretch man's arms painfully behind him, and some evidence of torture on people's faces; no sex scenes, but married man visits son he had through another woman; some upper male nudity and rear male nudity in one scene when police command fugitive to remove all his clothes; no alcohol use; no smoking; and, police use some torture to interrogate citizens, false arrest, lying, and wife's jealousy turns out to be a reasonable caution but police use her jealousy to capture her revolutionary husband.

On the surface, CATCH A FIRE seems like a positive presentation of some important political issues surrounding the fight against South Africa’s racist apartheid policies oppressing African blacks. What the movie doesn’t tell audiences, however, are the Communist, socialist underpinnings of some of the people in the story fighting against those policies.

Based on a true story, the movie focuses on the life of Patrick Chamusso, an African immigrant from Mozambique who works at an energy producing plant in South Africa. Patrick tries to stay out of politics. He even shuts off the radio when his mother or mother-in-law listens to the program from the African National Congress (ANC), a radical anti-apartheid group that has decided to fight apartheid with violence.

Patrick coaches a local soccer team. One day, the team travels to another city for the playoffs. After winning the playoffs, Patrick tells his wife that he is calling in sick to work in order to enjoy the team’s victory one more day. What she doesn’t know, however, is that Patrick is visiting the son he had from an affair with another woman. Apparently, Patrick had told his wife that he wasn’t going to see the other woman anymore.

The day that Patrick plays hooky from work is also the day that the ANC attacks the energy plant with a bomb. The police arrest Patrick, but Patrick refuses under torture to tell them that he was absent from work because he was visiting his former mistress. When the police also rough up Patrick’s wife, but finally let them go, Patrick decides to leave South Africa and join the ANC’s armed insurrection.

This movie is morally problematic because it sides with the “freedom fighters” in the ANC, which was and still is a socialist organization aligned with the South African Communist Party. The movie doesn’t tell you much about the ANC’s political orientation. Nor does it tell you that Joe Slovo, the man who led the ANC’s military wing and whose character appears in this picture, was also the head of the South African Communist Party. In fact, the script for this movie was written by Slovo’s real-life daughter, Shawn, a 56-year-old filmmaker who worked with Martin Scorsese on both RAGING BULL and THE KING OF COMEDY in the 1980s.

There are several positive elements in CATCH A FIRE, however. There is very little foul language, the violence is not overly graphic, there is no sex or explicit nudity, and the movie clearly opposes the evil apartheid policies of South Africa. Also, at the end, the movie makes a plea for forgiveness, including forgiveness for the policeman who approved the torture on Patrick. Furthermore, the movie’s ending reveals that Patrick now uses his house for children orphaned by the war over apartheid. Of course, it’s easy for radical groups like ANC to support forgiveness when they seem currently to hold most of the power in the Republic of South Africa. In recent years, there have been reports of the ANC drifting away from its socialist roots. Furthermore, even Joe Slovo, before he died, wrote a major treatise about some of the weaknesses in socialist theories of government. Still, research indicates that he remained committed to the Communist Party until his death.

Thus, CATCH A FIRE has a troubling, radical political subtext that it seems to be hiding. The filmmakers should have dealt with this issue more directly.