"What Profits a Man If He Loses His Soul?" 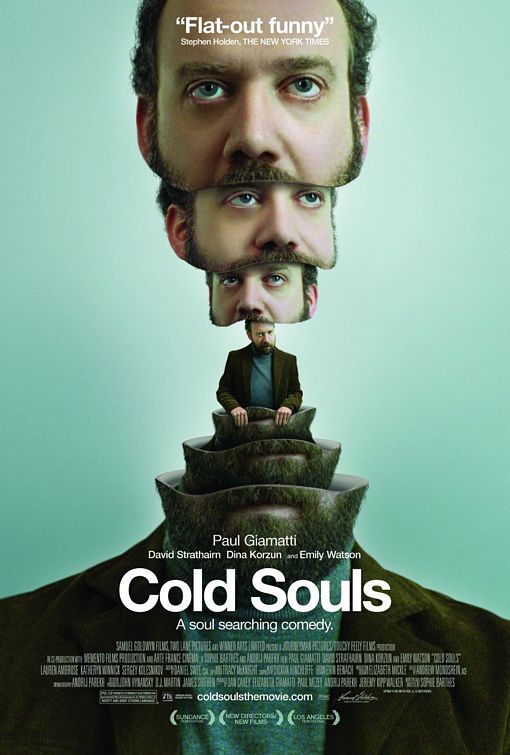 COLD SOULS is a very funny, insightful, ultimately religious movie marred by slightly excessive foul language. It is one of the best-written movies in a long time. Paul Giamatti of TV’s JOHN ADAMS plays himself. Paul is about to star on Broadway but has becomes very depressed. His agent tells him about a new company that promises to alleviate suffering by removing your soul. The company extracts Paul’s soul, but discovers that his acting suffers and nothing satisfies him because he’s lost his soul. The rest of the movie is a very funny comic adventure about how Paul tries to get his soul back.

COLD SOULS is a very witty, profound movie. It is laugh-out-loud funny in parts. In a clever way, it exposes the soullessness of modern society. The movie’s power is carried in the storyline and the dialogue, not the technical effects. The movie makes a very good point about contemporary society, but the strong foul language and some shots of nudity will turn off many people. Thus, MOVIEGUIDE® strongly cautions moviegoers about this content, even though almost everyone needs to hear the message of COLD SOULS.

(C, BBB, H, LLL, V, S, NN, AA, DD, M) Light Christian worldview with lots of positive moral allegories, plus some humanist pseudo-science that is ultimately refuted; 13 obscenities and 20 profanities but many are almost an invocation of God, although too many are casual; light violence includes a woman gets a nosebleed from carrying other people’s souls back and forth to Russia, a rough “soul extraction” procedure, and some threats of violence; married couple in bed but man cannot have intercourse, some groping and touching, suggestive dancing; nude picture of a woman in a “soul arousal” test, full live female nude models in Russian art institute but standing in such a way you cannot see private parts and nude statues; alcohol use and drinking to get drunk; smoking and drug use; and, soul extraction machine.

COLD SOULS is a very funny, insightful, ultimately religious movie marred by slightly excessive foul language. It is one of the best-written independent movies in a long time.

Paul Giamatti of TV’s JOHN ADAMS plays himself. He’s about to go on Broadway with his interpretation of Chekhov’s UNCLE VANYA and is experiencing a very dark night of his soul. His agent tells him about a new company that promises to alleviate suffering by removing your soul.

Paul visits Dr. Flintstein, who asks him, “If you have a tumor, don’t you get it removed?” Paul doesn’t even want to look at his soul, but eventually, when it’s extracted, he finds it’s only the size of a chickpea. His wife notices immediately that his soul is gone. She says his skin feels like a lizard. He has lost all passion, but without a soul, he doesn’t care anymore.

Without a soul, Paul’s performance in VANYA becomes over the top, and he sexually gropes his co-star, but nothing satisfies him because he’s lost his soul.

He decides he wants his soul back, but Dr. Flintstein convinces him to try out another soul for two weeks. It appears that the Russians have been sending souls to America. All they want in return is American souls because Americans have talent. Evidently, there’s a big market for the souls of Russian poets, who turn out to be factory workers that were probably reduced to soullessness before they even got their souls extracted.

Paul gets the soul of a Russian factory worker who’s been begging to get her soul back. He has visions of her life. He is tortured.

He goes back to Flintstein to get his own soul and finds out it has been stolen and taken to Russia. Paul finds the mule, a woman, who has been carrying the souls back and forth. He convinces her to take him to St. Petersburg to find his soul. He finds out his soul has been implanted into the soap opera star wife of a Russian millionaire. The wife is the essence of tawdry sexuality. Paul is devastated. He thinks, “How could my soul end up on a soap opera?” The question for the rest of the movie is can Paul get his soul back?

COLD SOULS is a very witty movie. It is laugh-out-loud funny in some parts. In a very clever way, it exposes the soullessness of modern society. Paul has to admit he was selfish to give up his soul. When Paul does give up his soul, all his inhibitions seem to disappear. In fact, almost all the cursing in the movie occurs after he has given up his soul. Before that, a few exclamations are appeals to God. Also, All the encounters with the Russian art scene, nude models, etc., are in the soulless state. Although the movie doesn’t hit you over the head with the message, the message seems clear – we need our souls back.

There are so many wonderful allusions, metaphors, bon mots, and profound references in COLD SOULS that will resonate with an intelligent audience that some people who see this movie will want to see it over again. That said, this is a low budget independent movie. For example, the soul extraction machine is simply an adapted MRI machine. Thus, the movie’s power is carried in the storyline and the dialogue, not the technical effects or the locations.

Although the movie makes a very good point about contemporary society, many people will be turned off by the profanity and the nudity. With a little judicious editing, this movie could have reached a much broader audience. That would be better, because most people need to hear the message of COLD SOULS.