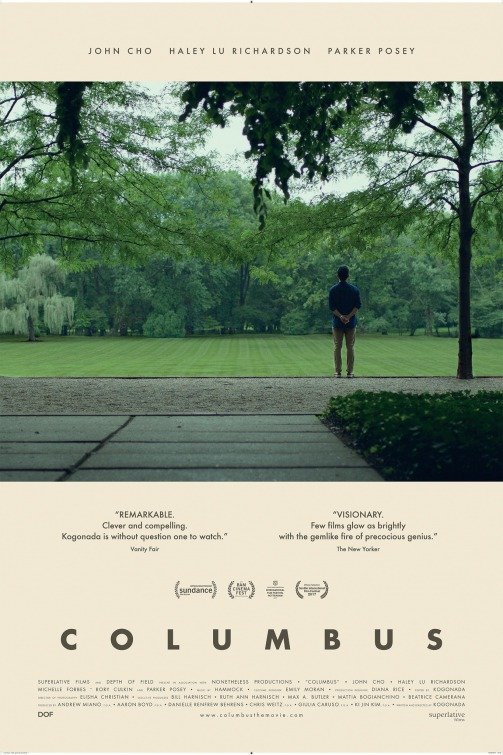 COLUMBUS is a romantic drama about a Korean man and a American woman. Jin is the son of an acclaimed architect. His father collapses in Columbus, Indiana, known for its architecture, and falls into a coma. Jin arrives from Seoul with conflicted feelings about his estranged father’s recovery. Korean custom requires Jin to be there if and when his father dies. Jin runs into Casey, a recent high school graduate who works in a local library and takes care of her sick mother, a drug addict. This begins a sweet friendship leading to serious discussions about life.

COLUMBUS is a beautifully shot, tastefully written romance. It sees friendship between men and women as a key to anything deeper. The performances by John Cho and Haley Lu Richardson are terrific, but some viewers may find the movie too slow. COLUMBUS has a strong Romantic worldview with light moral elements. The main romance is chaste, but another character is having an adulterous relationship. COLUMBUS also contains brief foul language, mature discussions of serious issues and references to drug addiction. Strong or extreme caution is advised.

(RoRo, B, L, S, N, AA, DD, M) Strong Romantic worldview about two friends and would-be lovers estranged from their sick father or mother, but there are some light moral elements seeing strong family ties as a good thing and the budding romance between the young man and woman is relatively chaste, plus some serious discussions about mortality, parent-child relationships and drug addiction; eight obscenities (including two “f” words and six “s” words and no profanities; no actual violence but man’s father is in a coma and may be dying; the main romance in the movie is chaste but there’s a scene where an unmarried man kisses and makes out briefly with a married woman on a couch until she asks him to stop; rear male nudity in shower and the bare upper back of a woman who gets into another shower is shown; alcohol use and light underage alcohol use includes young man buys a six-pack of beer and drinks it with 19-year-old girl, a man and woman each have an alcoholic drink in a hotel room, and casual alcohol use in a couple other scenes, but no drunkenness; smoking and references to a mother’s meth addiction, which, however, clearly destroyed her life up to the time the movie takes place; and, mature discussion of serious issues and young man is estranged from his father but young woman is devoted to her sick mother, though it’s put her future on hold.

COLUMBUS is a romantic drama about a Korean man who comes to the small town of Columbus, Indiana, to prepare for the transportation of his coma-afflicted father and forms a friendship with a young woman who seems trapped in the town. COLUMBUS has a Romantic worldview with some light moral elements, but also brief foul language, implied underage drinking and serious, mature discussions about life, including its problems.

The movie follows a man named Jin, who’s a translator and the son of an acclaimed architect. In the opening scene, the architect collapses and soon falls into a coma. His son arrives from Seoul with an uncertain timeline and a conflicted sense of what to wish for regarding his estranged father’s recovery. Korean custom requires Jin to be there if and when his father dies.

Jin accidentally runs into Casey, a recent high school graduate and Columbus resident who works in a local library. Short for Cassandra, Casey has sidelined any collegiate or travel plans in her role as unofficial caretaker for her mother, a recovering addict. Casey is a supporter and an untrained but highly perceptive expert of the town’s local architecture. When she meets Jin, the groundwork is laid in a shrewdly sustained walk-and-talk exchange over a fence.

Thus, begins a sweet friendship that harkens back to the Richard Linklater film BEFORE SUNRISE, where two young travelers from differing cultures meet and have a stirring romantic connection in one night. COLUMBUS is similarly rooted in its dialogue, but Writer/Director Koganada takes a very slow pace that could bore some viewers but will reward those who wish for more intellectual or arthouse approaches to stories.

The town of Columbus, Indiana is unique for having numerous world-famous architects who designed various buildings there. The movie uses these construction wonders as striking backdrops throughout its story.

As Jin puzzles through his relationship with his father, Casey similarly must sort out her obligation to her mother. Jin is skeptical, even disdainful, of his father’s lifelong devotion to his work.

The performances by John Cho and Haley Lu Richardson are terrific and moving, registering epic changes in each other’s character even through their subtle friendship and romance. Happily, COLUMBUS never veers into clichés of star-crossed, doomed lovers. Instead, it keeps the relationship between the two lead characters tasteful and refreshing.

Ultimately, COLUMBUS is a beautifully shot, tastefully written romance that sees the value of friendship between men and women as key to anything deeper. The movie’s immoral content, including its foul language, is rather minimal, though sometimes strong. The characters frequently smoke. There are references to the town’s meth problem and the young woman’s addicted mother. There are also serious mature discussions about mortality, drug addiction and parent-child relationships. Also, there’s implied underage drinking in one scene. Finally, though Jin and Casey are conflicted about their sick parents, the movie’s Romantic worldview still has some touching moral elements showing the importance of having strong family bonds. Also, the romance involving the two young adults is chaste. There’s a scene where another couple, one of them married make out on a couch, but that’s it.

Nevertheless, MOVIEGUIDE® advises strong or extreme caution for the brief but strong foul language, the Romantic worldview and the serious discussions in the movie COLUMBUS.