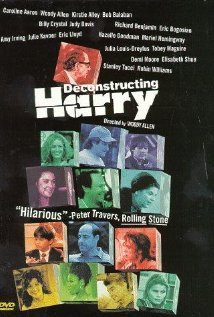 Although DECONSTRUCTING HARRY has all the elements of an Woody Allen movie, it seems stale and contains abundant immorality. Allen plays Harry, a New York writer who is not only having writer’s block, but women trouble. A former lover of his, named Jane, comes to his house and threatens him with a gun. She is upset that he published their kinky affair in his book. Harry calms Jane down, but this starts a crisis where Harry becomes introspective about his fictional characters and the similarities they have with his real life friends. As he makes his way to his former college to accept an honor, his fictional characters keep popping up in his real life.

DESCONSTRUCTING HARRY is inferior to other Allen films because it borrows from some of his better movies and replaces his usually ironic and clever dialogue with puerile obscenities. Allen has also explored his own fractured sexuality in many of his movies, frequently with taste and often with humor. Yet, in DECONSTRUCTING HARRY, he turns from a lovable neurotic to a dirty old man. With regards to religious and moral matters, Harry is boldface about his lapsed Judaism into atheism. DESCONSTRUCTING HARRY could be called the least of Woody Allen

Most Woody Allen movies are poignant comedies set in Manhattan starring Woody himself as a neurotic Jew who has profound questions about his life and his faith. DECONSTRUCTING HARRY is no exception. Though his movies are unlike movies by any other filmmaker, each movie he creates contains common elements. Allen fans go to see his films to hear clever dialogue, to see how Allen has rearranged the same cinematic pieces in his bag to create a new story and to see him wrestle with life. While DECONSTRUCTIN HARRY holds all the signature elements of an Allen movie, it, regrettably, contains some immorality and staleness that are unique, given Allen’s usually high standards.

Allen plays Harry, a New York writer who is not only having writer’s block, but women trouble. A former lover of his, Jane (Caroline Aaron), comes to his house and threatens him with a gun. She is upset because he published their kinky affair in his latest book, and the only concession he made to her in the story is that he changed her name to Janet. Harry calms Jane down, but this episode initiates a crisis where he reflects about his fictional characters and the similarities they have with his real life companions.

The movie starts out with a family having a picnic by a private pond. A young woman (played by Julia Louise-Dreyfus) leaves the party, walks toward a home, enters it, meets a man inside, named Ken (Richard Benjamin), and the two start to commit adultery. They are interrupted by an oblivious blind woman, which is played for laughs, and soon the audience discovers that these are Harry’s fictional characters – in fact, the young woman is Janet.

In real life, Harry is trying to find a companion to join him at a ceremony honoring him at his alma mater. He thinks it is ironic that his college is honoring him because he dropped out and never graduated. Through negotiations and strange events, he kidnaps his own son from school, takes an African-American hooker and takes an old friend who unexpectedly dies as they travel. Another real life story explored in the movie is Harry trying to convince his young former lover, Faye (Elizabeth Shue), that she shouldn’t marry his friend, Larry (Billy Crystal). Harry tells Faye that he loves her and that she should marry him. Throughout the film, Harry’s real life friends and the literary characters that he has created intersect and interweave as if they were in the same story. At the college, the movie climaxes with a huge gathering of both Harry’s real friends and his fictional characters.

DESCONSTRUCTING HARRY is inferior to many other Allen movies because it borrows from some of his better movies, such as characters coming to life in THE PURPLE ROSE OF CHAIRO, and it replaces his usually ironic and clever dialogue with many obscenities. Allen had 5 obscenities in EVERYBODY SAYS I LOVE YOU, and he has over 60 in this movie. It has been said that bad writers use foul language when they lack the vocabulary to adequately express themselves. Part of the Allen charm is that he is able to communicate his angst and frustration by keeping offensive language to a minimum. Regrettably, in this movie, everybody swears.

Allen has also explored his own fractured sexuality in many of his movies, frequently with taste and often with humor. Yet, in DECONSTRUCTING HARRY, he turns from a lovable neurotic to a dirty old man. The older he gets, the more difficult it is to see him carry on romances with young woman. Since Allen isn’t physically attractive, the audience wonders why the beautiful Elizabeth Shue would become romantically involved with him, even in the fictional world. (Perhaps, he is giving commentary on his own personal romantic life with his very young step-daughter, Soon Ye-Previn.) His humor is more crude and sexual in this movie than his previous films. Finally, he has usually avoided outright depictions of sexual practices in his movies, going rather for innuendo and implication, but here he depicts several sexual acts including adultery and oral sex.

In regards to religious and moral matters, Harry is boldface about the fact that his Judaism has lapsed into atheism. He states several times that he is an atheist, and also takes opportunities to knock Judaism and even Catholicism. He states, “If I could choose between air conditioning and the pope, I’ll take air conditioning.” Another times he rails his practicing sister, “It’s like you’re born again, except you are a Jew.” Of course, these are all said in jest, but people of faith may not appreciate it. To his credit, Harry says “I’m spiritually bankrupt.” He knows he is without God and admits it, whereas many film characters simply pretend they have no spiritual nature to them at all.

DECONSTRUCTING HARRY will not be a blockbuster hit, and it may not be well received by Woody Allen fans. Future Allen movies will tell if he will delve deeper into godlessness, obscenity and chasing young women, or if he will return to well-written romantic comedies appropriate to his age.