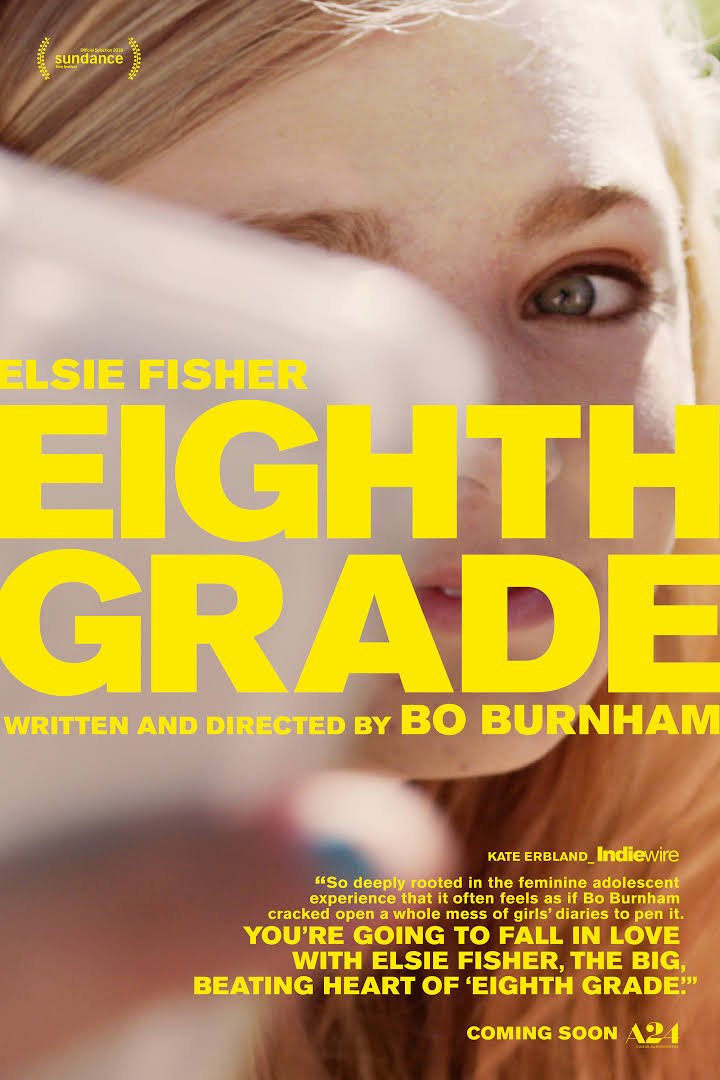 EIGHTH GRADE is a slice-of-life portrait of an eighth-grade girl in her last week of the school year before high school. The movie follows Kayla, an awkward, insecure, slightly overweight eighth grader. Each day, Kayla makes YouTube videos about aspects of her life that almost no one watches. She’s obsessed with her cellphone, constantly surfing Facebook and Instagram to “like” other people’s lives. However, Kayla doesn’t have any friends, not does she have any things of her own to share. Meanwhile, her media devices lead to a lack of communication with her father.

EIGHTH GRADE is an extremely intimate look into the mind of an average girl in an era when social media and cellphones have destroyed much of human interaction. It’s funny enough to be classified officially as a comedy, but it’s also very heartfelt and touching in many places. The movie has a strong moral worldview with a poignant father-daughter relationship that has a positive resolution. Kayla usually makes wise choices. However, EIGHTH GRADE is marred by a significant amount of strong foul language and some crude sexual references.

(BB, Ro, Pa, LLL, V, S or SS, MM):
Dominant Worldview and Other Worldview Content/Elements:
Strong moral worldview about a young teenage girl who gradually establishes a stronger relationship with her widowed father and who generally does the right thing (including stating a belief in God and praying to God at one point; the prayer is answered positively), despite Romantic, pagan elements putting pressure on her to make bad choices;
Foul Language:
About 23 to 25 obscenities (including about 15 “f” words), one JC and one GD profanity, and five light profanities;
Violence:
No actual violence, but a school runs an active shooter drill;
Sex:
No depicted sex but some sexual content and references involving teenagers (sometimes in comical context) such as implied self-abuse during a health movie being shown in a middle-school class and other students yell at the boy doing it, references to oral sex in one situation which ends with a couple crude jokes about it, girl declines one older boy’s invite to take off their shirts together, girl closes her laptop screen right away when she discovers the meaning of a crude sexual term that she was looking up, a girl stares lustfully at a boy, teenage boy asks younger teenage girl “how far” she’s gone but hasn’t even been kissed, and brief talk about sexting (sending nude photos to someone using a smartphone), but no nude photos are sent, the subject is just discussed in a hypothetical way;
Nudity:
No nudity;
Alcohol Use:
No alcohol use;
Smoking and/or Drug Use and Abuse:
No smoking or drugs; and,
Miscellaneous Immorality:
Young female protagonist is too involved with her smartphone and other computer devices that it has created some emotional distance between she and her father, but the situation is resolved positively and girl must stand up to bullies.

EIGHTH GRADE is a winsome, touching slice-of-life portrait of an eighth-grade girl in her last week of the school year before high school. An absorbing entertainment, EIGHTH GRADE has a strong moral worldview with a poignant father-daughter relationship at its core, but this is undercut by strong foul language and by crude sexual references among the movie’s teenage characters, although the female heroine ultimately makes wise choices.

The movie’s story follows a 13-year-old girl named Kayla (Elsie Fisher), an awkward, insecure, slightly overweight eighth grader. Each day, Kayla makes YouTube videos each day about various aspects of her life that almost no one watches. She’s obsessed with her cellphone, constantly surfing Facebook and Instagram to “like” other people’s lives and posts. However, Kayla doesn’t have any friends, nor does she have any things of her own to share.

The movie takes place during Kayla’s last week of eighth grade. Kayla looks forward to life in high school, even though she realizes that all her hopes for junior high went nowhere. She lives alone with her father, who briefly mentions that her mom left them when she was a baby. Sadly, Kayla is too involved with her computer devices. So, she maintains a comically high level of sullen silence toward her father. This breaks her father’s heart, because he really tries to be a good and engaged father, but Kayla keeps locking him out of her thoughts and life.

In the story, Kayla navigates her way through an awkward pool party for a snobbish female classmate’s birthday. She also spends a triumphant day “shadowing” and hanging out with an older high school girl at her future high school while she engages in awkward encounters with boys. Through all this, Kayla is afraid to discuss her most difficult moments with her father for much of the movie, but, thankfully, she usually makes the right moral decisions at each key turn.

Ultimately, EIGHTH GRADE is an extremely intimate look into the mind of an average girl in an era when social media and cellphones have destroyed much of human interaction. It’s funny enough to be classified officially as a comedy, but it’s also very heartfelt and touching in many places. Furthermore, there’s an almost documentary feel in the way that Writer/Director Bo Burnham (a star standup comedian making his filmmaking debut here) shoots the events.

Interesting techniques abound in EIGHTH GRADE. Burnham uses extreme zoom-in shots to put the viewer in the shoes of Kayla at her most awkward moments. He then pulls far away at moments that are emotionally devastating, moments that leave Kayla as alone onscreen as she feels inside. The movie’s musical score is also unique. Composer Anna Meredith veers between barely perceptible keyboard strokes at pensive moments and loud, overbearing keyboard squawks at moments that represent when Kayla is overwhelmed by life.

Sadly, EIGHTH GRADE has a significant amount of strong foul language. There are also several crude sexual references in the movie. At one point, for example, there’s a situation where the naïve and innocent Kayla is introduced to a crude sexual term. When she investigates what the term means while looking it up on the Internet, she is shocked to see what it means. The situation ends with a couple crude jokes about the term.

Despite this edgy content, Kayla eventually puts down her computer devices and develops a stronger relationship with her father and learns to stand up for herself to bullies as well. She ultimately avoids any sexual behavior and takes up with an innocent boy. Best of all, Kayla expresses a strong belief in God and even prays to Him at a vital turning point in the movie, with good results.

Ultimately, EIGHTH GRADE shows that, despite all the moral garbage in much of today’s popular teenage culture, a morally positive, more godly lifestyle brings true happiness.