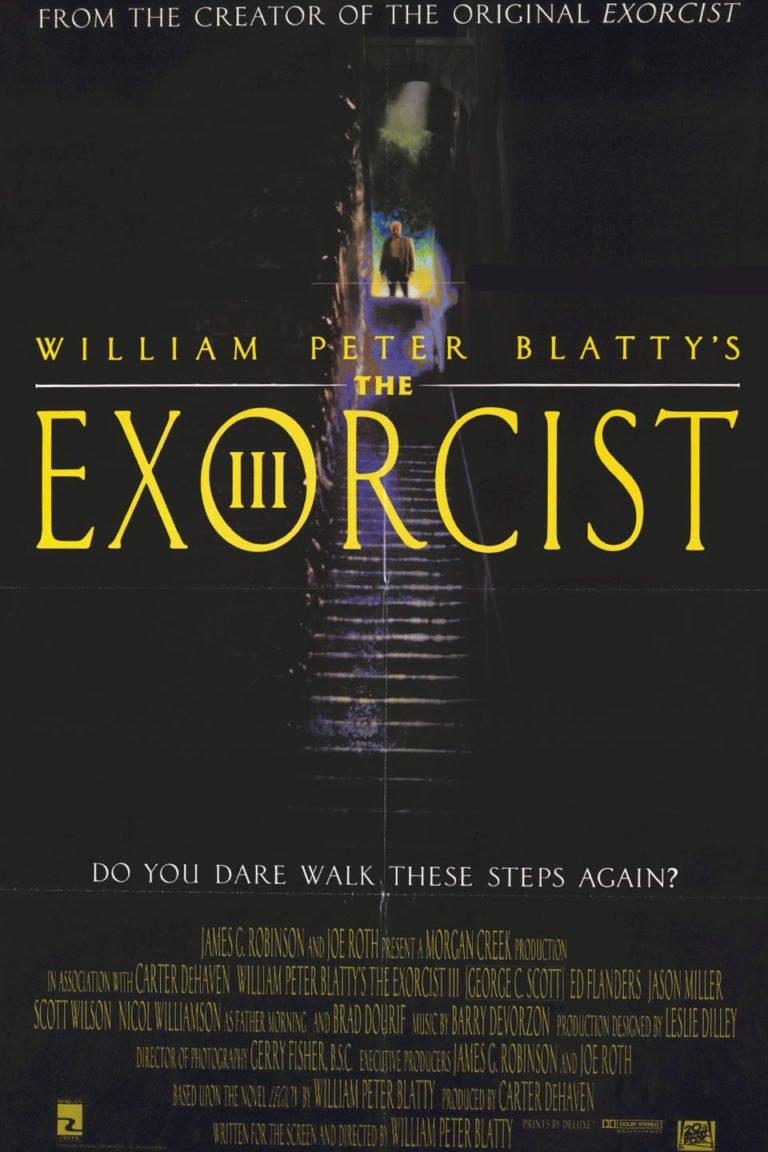 EXORCIST III is the actual sequel to the events of the 1973 original and is set in Georgetown seventeen years later. The city is in the grip of an unexplained series of brutal and grisly murders. The victims: priests.

George C. Scott plays police detective Lt. Kinderman, who is a good friend of Father Dyer and Father Merrin, a pair of Jesuit priests also involved with Kinderman and the exorcism from seventeen years earlier. Their relationship is such that they can talk deeply about matters of life and death and the hereafter, about which Kinderman is skeptical. Kinderman tells Father Dyer, “I wish I could be as sure as you are.” Kinderman is about to have his beliefs totally shaken, as the events of the next few days test him to the core.

A mutilated and decapitated body is found by the police, which has the bizarre markings of the “Zodiac” murderer, who was sentenced to death in the electric chair fifteen years prior. Meanwhile, in a Catholic Church, a priest hears the confession of a sinner. However, as the voice becomes frantic and dispassionate, the priest realizes that the man is telling the truth about murders he has committed. The priest becomes terrified and in an instant, his head is cut off (off screen, by the way).

Overworked and overwhelmed by it all, Father Dyer is admitted to Georgetown University Hospital for tests. The next morning, his body is discovered with his head removed and every drop of blood in his body is in small cups next to the bed. Yet, not a drop of blood has been spilled, not even smeared on the cups. Kinderman is grieved, but remains stolid. A madman is loose.

Assigned to the case, Kinderman has few clues until he meets a catatonic nurse who may be aware of the killer’s identity. The confrontations between Kinderman and the antagonist, who is a demon-possessed, insane patient in the solitary confinement area of the mental ward, reach new levels of intensity for audiences. Without a doubt, this is one of the most intense motion pictures ever seen.

The movie will have your palms wet and leave you reeling by the climax. It is a film that uses skill and craftsmanship to attain high levels of excellence from all areas: direction, scripting, acting, and production. Never once is a decapitated body or head shown. Almost all the violence takes place off screen. Minimal use of obscene language is used. This is not a modern blood and guts fright film, but a well crafted, old fashioned thriller which uses suspense, not carnage, to grab the audience. In fact, this is a film that will grab you and won’t let you go.

Also to be commended is the way the spiritual and physical battle between God and Satan is portrayed. Time and again the film attests to the power of Jesus Christ, and His power over Satan.

However, because this may be the most frightening movie ever made, adults should exercise extreme caution before seeing EXORCIST III: LEGION. Children should definitely not see it.

It has been said that people go to the movies for four reasons: to laugh, to love, to cry, or to be scared. Focusing on the last, Jesuit educated Blatty has created a masterpiece. Producer Carter DeHaven adds, “Blatty wrote the first screenplay (THE EXORCIST) and had absolutely nothing to do with the second one (EXORCIST II: THE HERETIC), which was a bit of a disaster.”

EXORCIST III: LEGION is the film the original wanted to be, but without the green vomit. Still, there are some scenes of demon-induced nightmares (ie: snakes crawling all over a character) that should be taken into consideration. It is a truly, frightening movie that will have your eyes glued to the screen.

Genre: Horror from a Biblical Perspective