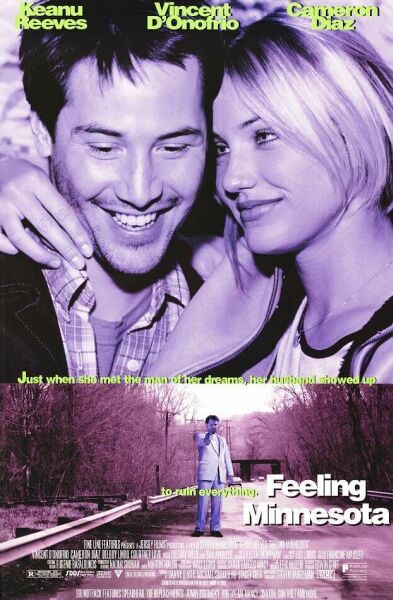 In FEELING MINNESOTA, a young blond woman named Freddie is forced into marrying Sam, but then she falls in love with Sam's brother Jjaks . Both Sam and Jjaks are criminals who only know how to steal, fight and kill. They are very foul mouthed, too. The humor comes out of their hopeless lack of character.

In FEELING MINNESOTA, brothers Sam and Jjaks have been beating on each other all of their lives. As adults, this destructive behavior has led Sam to work for a small-time crime boss, named Red, and has led Jjaks in and out of prison. Jjaks returns to Minnesota to attend his brother’s wedding and finds that Sam’s bride is Freddie, a tough blond who dreams of a better life in Vegas. Freddie is forced into marrying Sam as a punishment for stealing from Red. Freddie desperately wants out. When she talks to Jjaks , she instantly takes to him, and soon, they are committing adultery in the bathroom. Jjaks apparently shines up to her, too, and Freddie leaves Sam for Jjaks . The remainder of the movie involves Sam trying to win Freddie back with violence, murder and extortion.

Sam and Jjaks have no redeeming qualities. Both of them are criminals who only know how to steal, fight or kill. They are very foul mouthed, too. The humor comes out of their hopeless lack of character. We don’t laugh out of joy or surprise, but out of disgust and sympathy for two losers who are in a fix. FEELING MINNESOTA will probably have a small audience which won’t include moral Americans.