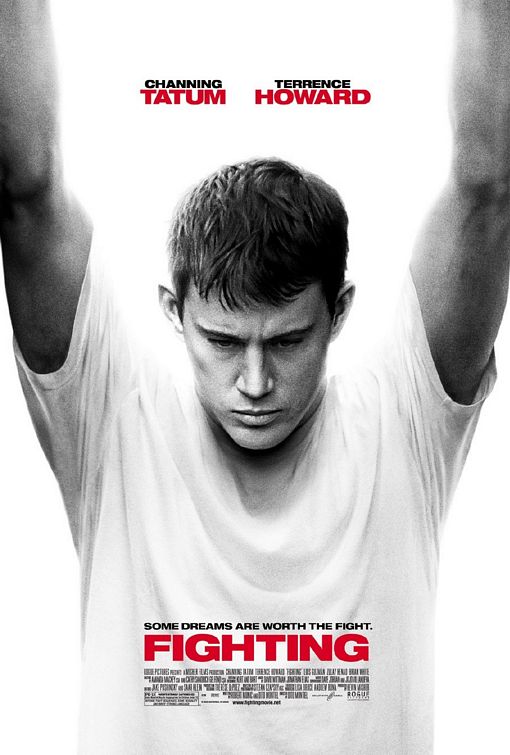 FIGHTING opens on the streets in New York City. Shawn, a young struggling white guy from a small Southern town (newcomer Channing Tatum), gets a chance to make some money in the corrupt, underground bare-knuckle fighting circuit. Almost overnight, Shawn becomes a star brawler under the tutelage of Harvey, a black street hustler played by Terrence Howard. Using his earnest charm, Shawn manages to begin a tentative romance with a beautiful waitress who is a single mother. He also develops a bond of grudging respect and friendship with Harvey. Shawn’s relationship with Harvey becomes strained, however, when Harvey suggests that Shawn throw one of his fights.

FIGHTING is raw and exciting. What makes it stand out, however, is Terrence Howard’s amazingly natural and vivid performance. The rest of the actors are good, but Howard is superlative. All that said, the story itself is still somewhat simple and conventional. Also, the movie doesn’t make any firm, positive moral or spiritual points. This dilutes the story’s heroic possibilities. FIGHTING also contains some foul language, intense sometimes-brutal violence and an implied sex scene. Thus, MOVIEGUIDE® gives FIGHTING three stars and advises extreme caution.

(PaPa, B, Ho, LL, VVV, S, N, AA, DD, MM) Strong pagan worldview focuses on gaining victory and earning money through street fighting and gambling, some light moral elements of kindness and friendship, plus references in one scene to cross dressing men at an upscale house of major ill repute; 19 obscenities (including one “f” word) and two light profanities; lots of strong bare-knuckle fight violence as well as sometimes very strong, brutal fight violence with some blood such as punching, kicking, body slams, people hit heads and backs on hard floors, choke holds, fighters fall through glass, fighters pounced against objects, gun waved, and fighter slammed really hard onto marble; implied fornication with protagonist and loose women and prostitutes at fights, plus one fight venue is at a house for men interested in cross-dressers; alcohol use and drunkenness shown briefly; smoking and brief drug references; and, gambling, materialism, revenge, people and gamblers trying to fix fights, and a lie at the end resolves a plot problem.

At first glance, FIGHTING would seem to be a minor B movie about no-holds-barred street fighting for money. The movie rises above its generic roots, however, because of a tremendous performance by Terrence Howard as the black manager of a white street fighter. His performance turns the relationship between the two men into the main focus of the whole show. Regrettably, the movie makes few, if any, moral or spiritual points, but it does show that even a simple, formulaic plot can be turned into something special if the filmmakers and the actors treat the material seriously and intelligently.

The story opens on the streets near Radio City Music Hall in New York City. A young white guy, Shawn (newcomer Channing Tatum), tries to sell some counterfeit goods, but a black scam artist named Harvey (Terrence Howard), with help from a couple other men, manages to disrupt Shawn’s sales and steal his money during a scuffle.

Shawn catches up with Harvey and one of the men at a small diner, where he demands his money back. Harvey gladly gives it back to him, but makes a proposition. Harvey tells Shawn that he thinks he Shawn has what it takes to make some money as a street fighter.

Almost overnight, Shawn becomes a star brawler in the corrupt bare-knuckle circuit in town. Using his earnest charm, he even manages to begin a tentative romance with a beautiful waitress who is also a single mother. Furthermore, he develops a bond of grudging respect and friendship with Harvey.

Shawn’s relationship with Harvey becomes strained, however, when Harvey suggests that Shawn throw one of his fights. What will happen to Shawn and Harvey, including their partnership?

FIGHTING is raw and exciting. What makes it stand out, however, is Terrence Howard’s amazingly natural and vivid performance. The rest of the actors are good, but Howard is superlative. He has a way of speaking and moving that imbues his characters with a solid, natural reality that’s piercingly interesting and soulful. This comes as no surprise, of course, since MOVIEGUIDE® has been impressed with Mr. Howard’s talent ever since we first noted his performance in 1999’s THE BEST MAN.

All that said, the story itself is still somewhat simple and conventional. Also, the movie doesn’t make any firm, positive moral or spiritual points. In fact, the core of the movie is essentially a conventional story about two men trying to climb the ladder of success by defeating their opponents, sometimes in brutal or deceitful fashion. This dilutes the heroic possibilities in the script and its characters (unlike a movie such as ROCKY), even though the movie succeeds in getting viewers to root for its sympathetic, struggling underdogs. FIGHTING also contains plenty of foul language and a scene of implied sex between the protagonist and his new girlfriend.