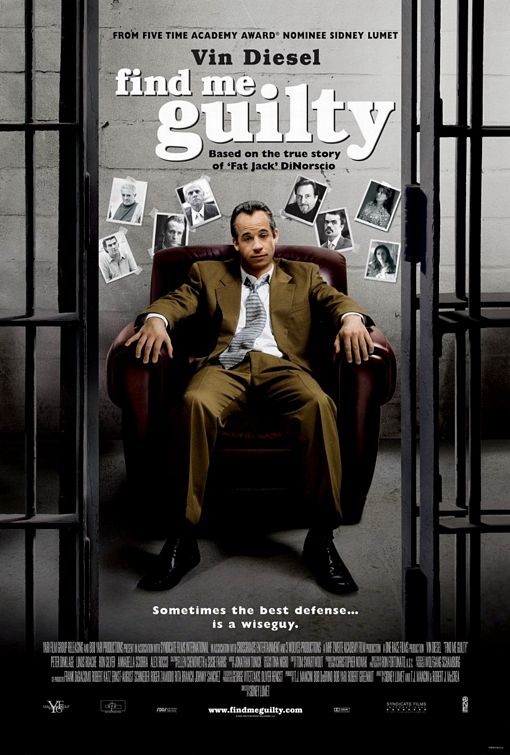 Based on a true story, FIND ME GUILTY opens with New Jersey mobster Jackie DiNorscio ("Duh-nor-she-o"), a member of the Lucchese crime family, being shot by his best friend in the 1980s. Jackie survives, only to be busted for illegal drugs. Jackie gets a 30-year sentence, but is offered an opportunity to shorten his time by testifying against his closest friends, men he has known since childhood. Loyal to a fault, Jackie refuses to testify and becomes part of the largest group of criminal defendants in U.S. history. Acting as his own lawyer, Jackie takes over the spotlight, but his cocky, outrageous manner threatens to endanger everyone's defense in one of the longest criminal trials in U.S. history.

Vin Diesel, who's gravitated to action hero roles, is very good as Jackie. So is the rest of the cast, especially Ron Silver as the sympathetic but no-nonsense judge. The story and characters are very entertaining and well-directed by veteran Sidney Lumet. The movie seems to take Jackie's side, however, and contains abundant foul language. Jackie's love and loyalty may be commendable in many circumstances, but not when it comes to protecting violent criminals.

(PaPa, Ho, C, LLL, V, S, N, A, DD, MM) Strong pagan worldview with a skewed sense of morality, plus light references to minor character's homosexual proclivities and man during trial asks jury to give him the jail sentence instead of his childhood friends; at least 107 mostly strong obscenities, six strong profanities, six light profanities, and two or more dirty, lewd jokes; brief violence such as men fight, man shoots another man who's sitting in bed with some blood, man upsets table, sick man collapses during trial, sick man wheeled in on gurney at trial, man falls off gurney during trial but is okay, and guards beat up a prisoner; man and ex-wife paw at one another and start to have intercourse in jail cell before being interrupted (nothing explicit shown), plus two or more dirty jokes; upper male nudity; alcohol use; smoking, man snorts cocaine in flashback scene and references during a trial of crime syndicate's drug business; and, gangster protagonist gets away with crimes and is depicted in a sympathetic light, but no-nonsense judge is also a likeable, sympathetic character.

Director Sidney Lumet has had a long, somewhat distinguished career, beginning with 12 ANGRY MEN in 1957. He followed that movie with such notable movies as THE PAWNBROKER (1964), FAIL-SAFE (1964), SERPICO (1973), MURDER ON THE ORIENT EXPRESS (1974), DOG DAY AFTERNOON (1975), NETWORK (1976), and THE VERDICT (1982). His films in the 1990s (e.g., GLORIA and GUILTY AS SIN) have not been so successful, however, so he’s been under the radar for some time now. FIND ME GUILTY, his only release since 1999, won’t set the world on fire, especially because of all its strong foul language, but it shows a high level of professional expertise that probably will grab some attention.

Based on a true story, the movie opens with New Jersey mobster Jackie DiNorscio (played by Vin Diesel), a member of the Lucchese crime family, being shot by his best friend in the 1980s. Jackie survives, only to be busted for illegal drugs. Jackie gets a 30-year sentence because of his past convictions, but he is offered an opportunity to shorten his time by testifying against many of his closest friends, men he has known since childhood.

Loyal to a fault (“I love these guys,” he keeps saying), Jackie refuses to testify and becomes part of the largest group of criminal defendants in U.S. history under conspiracy charges (the infamous Rico Law). Jackie is also disgusted by the legal system, especially the bad legal representation he got from his lawyer on the drug charge, so he decides to defend himself.

“I’m no gangster,” Jackie insists to the court and the jury, “I’m a gagster.” With his cocky attitude, outrageous, often offensive sense of humor, and his unconditional loyalty, Jackie takes over the spotlight in the trial, which lasts 21 months in 1986-87. Jackie antagonizes the top mobster in the trial and sometimes the judge, but he never fails to surprise them, or his other fellow defendants.

Vin Diesel, who’s gravitated to action hero roles in recent years, is very good as Jackie, as is the rest of the cast, especially Ron Silver as the sympathetic but no-nonsense judge. The plot, story and characters are very entertaining and well-directed. In addition, however, to all the strong foul language, the movie seems to take Jackie’s side. It wants viewers to root for this unlikely hero, even when he antagonizes the good judge. Jackie’s love and loyalty to his friends may be commendable in many circumstances, but not when it comes to organized crime. Thus, while it is true that government conspiracy charges like those in this movie can be abused too often, some people in this world, like the gangsters here, deserve all the grief and misery that the legal system can hand them.

Love and loyalty are indeed among the highest of God’s moral virtues, but they are not meant to excuse the kind of violent, despicable gangsterism that has plagued too many of our cities in the last 150 years. As Paul writes in 1 Cor. 13:6, “Love does not delight in evil.” The same could be said for the issue of loyalty and other important moral virtues, including our God-given ability to create art and entertainment.