FLAGS OF OUR FATHERS

"Realistic to the Extreme" 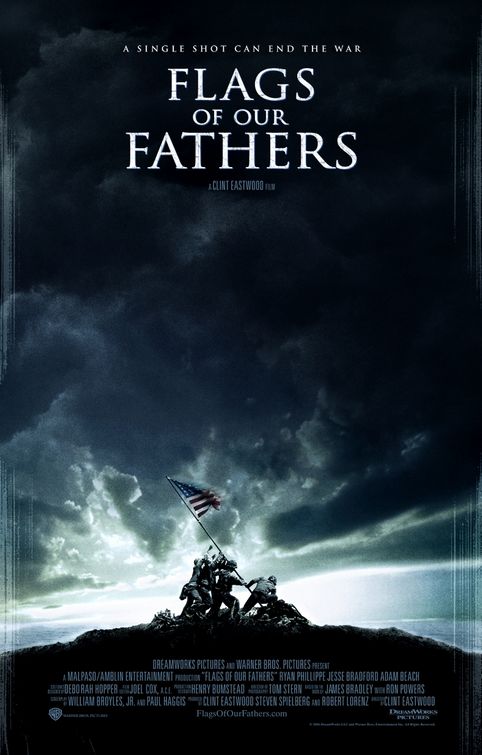 FLAGS OF OUR FATHERS is an important, agonizingly poignant history lesson about the American soldiers who invaded the Japanese island of Iwo Jima during World War II. Directed by Clint Eastwood, the movie focuses on the three surviving soldiers among six who raised the second American flag on Iwo Jima, which appeared in the famous Pulitzer Prize winning photo. The movie shifts back and forth between the fight on the island, a publicity tour with the three survivors designed to raise money for the war effort, and the sad, sometimes tragic circumstances of the soldiers' lives after the war.

The plot in FLAGS OF OUR FATHERS is somewhat choppy since the director, Clint Eastwood, fails to provide a single overall premise and tone throughout the whole movie. This movie often questions America's need to manufacture heroes in a time of war. This and other negative post-modern aspects are balanced by the movie's patriotic depiction of average Americans called upon to do their duty with distinction. MOVIEGUIDE® advises extreme caution for the movie's frequent emphasis on the negative, some graphic war violence, graphic images of wounds, and an abundance of strong foul language.

(BB, C, PPP, RH, Pa, H, LLL, VVV, S, N, AA, D, M) Strong moral worldview contains a very strong commitment to truth and statements that the true heroes of World War II are the soldiers who died on the battlefield, with one image of a Christian worship service and very strong patriotic elements presenting a very positive portrayal of American soldiers, but mitigated overall by some light historical revisionism (especially in mitigating the importance of religious faith to many American soldiers), some pagan elements and some humanist post-modern attitudes questioning America's need to manufacture heroes in a time of war, which are not always as inspiring or positive as they perhaps should be or could have been; about 81 obscenities (including some "f" and "d" words), 23 strong profanities, five light profanities, and drunken man vomits several times; extreme graphic war violence in muted colors with some detached body parts and guts showing occasionally, including explosions, decapitated head, images of dead Japanese soldiers who have committed suicide with grenades against their stomachs and chests, soldiers shot in head, soldier with arm shot off, American ships bombard Japanese island with big guns, big guns bombard American ships, tanks and soldiers on beach, some graphic images of seriously and fatally wounded American soldiers, implied torture of American soldier, American soldier bayonets Japanese soldier, Japanese soldiers burnt by flame throwers, and soldiers shot; no sex scenes but some light sexual comments by soldiers and older married couple lies in bed together; upper male nudity; alcohol use and one soldier upset by things happening in war repeatedly gets drunk and never really recovers from his alcoholism; smoking; and, condescending or racist attitudes toward American Indian soldier, some negative attitudes toward American government officials during World War II, including soldiers object to elaborate, somewhat phony publicity tour designed to raise money to help pay for the large war debt, but they decide it's patriotic and moral to help raise the money because it helps their brother soldiers on the battlefield and they decide to assuage their moral conscience by always publicly declaring that the true heroes are the soldiers who died on the battlefield.

FLAGS OF OUR FATHERS is an important, agonizingly poignant history lesson about the American soldiers who invaded the Japanese island of Iwo Jima during World War II. Except for parts of the ending, however, it is not as inspiring or positive a portrait as it perhaps should have been. Though it bathes the horrors of war it depicts in gray tones rather than bloody living color, it is a realistic, often tragic portrait that pulls no punches otherwise. Don’t expect, therefore, a rah-rah patriotic movie like the John Wayne classic SANDS OF IWO JIMA.

The movie is based on the book co-written by James Bradley, the son of one of the six men who raised the second American flag on Iwo Jima, about the Battle of Iwo Jima and its aftermath. A famous photo of the second flag-raising won a Pulitzer Prize and inspired millions of Americans to keep hope alive despite thousands of young American men shedding their blood and lives for their country.

The movie opens with glimpses of the battle on Iwo Jima interspersed with a re-creation at Soldiers Field in Chicago of the famous flag-raising photo. The re-creation is part of a publicity tour with the three remaining flag-raising soldiers to sell War Bonds to keep the war going. Uncomfortable with their new celebrity, the flag raisers are told that the tour is just as important as fighting the war because the money raised will help support their buddies back in the Pacific. The men feel, however, that the real heroes are the American soldiers who died on Iwo Jima. They decide to repeatedly say this publicly.

FLAGS OF OUR FATHERS shifts back and forth between the fighting on Iwo Jima, the publicity tour to sell War Bonds, and the post-war lives of the three survivors. Three of the six flag raisers die fighting on Iwo Jima. Of the three remaining men, only John “Doc” Bradley, a Navy Corpsman, was able to piece together a successful life after the war. Much of the story about the publicity tour involves one of the soldiers, Ira Hayes, an American Indian. The movie shows how Ira was unable to get over the horrors of war and cope with what he felt was an undeserved position as a national hero. He succumbs to alcoholism on the tour and never recovers.

The most inspiring parts of the movie come as “Doc” Bradley’s son, James, begins to learn more about the stoic attitude his father brought to his wartime experiences. His father thought it better to forget about the horrors of war and rarely spoke to his family about what happened on Iwo Jima. Even then, however, he is plagued by nightmares and bad memories. At the end of his life, Doc decides to focus on one of the most positive memories he has of his buddies on Iwo Jima.

Clint Eastwood directs FLAGS OF OUR FATHERS in a straightforward, documentary style. Just when you think his camera might succumb to the patriotic sensationalism of the publicity tour and the heroic fight for Iwo Jima, it pulls the viewer back into the cold reality of the horrors of war, the overdone celebrity of the publicity tour, Ira’s sad bouts with the bottle, or some other negative aspect. This leads to a somewhat choppy plot because the movie fails to present one over-arching premise or tone that runs strongly throughout the whole drama.

Despite Eastwood’s commitment to historical realism, the movie has some light revisionist history. For example, the actor playing one of the minor soldiers who becomes an important positive memory for Doc Bradley looks nothing like the real-life man. Also, the movie only has one or two minor references to religious belief in it. Of course, the three remaining flag-raisers might have led happier, more fulfilled lives if they had a strong religious faith in God and Jesus Christ and, apparently, they did not have such faith. (For a good war movie that does have many positive religious references, look no further than last year’s THE GREAT RAID or 1943’s ACTION IN THE NORTH ATLANTIC with Humphrey Bogart and Raymond Massey [even a Jewish sailor gets a Christian funeral in the Bogart movie].)

FLAGS OF OUR FATHERS also questions America’s need to manufacture heroes in a time of war. This negative post-modern aspect is balanced by the movie’s patriotic depiction of average Americans called upon to do their duty and doing it with distinction. MOVIEGUIDE® still advises extreme caution for the movie’s frequent emphasis on the negative, some graphic war violence, graphic images of war wounds, and an abundance of strong foul language.

Ultimately, this reviewer thinks that war movies should either be shot in black and white (like BATTLEGROUND or SAHARA) or in living color (like PATTON or VON RYAN’S EXPRESS), but without focusing on the really gory aspects of war. The horrors and realities of war can be shown perfectly well in a patriotic, inspiring movie for broad audiences, and vice versa, without all of today’s post-modern, R-rated angst. FLAGS OF OUR FATHERS is not a bad movie. In fact, some of its re-creations are extremely impressive. It’s just a rather dour motion picture with a bit too jaundiced view of reality and the World War II propaganda on the American side.

Watch FLAGS OF OUR FATHERS: