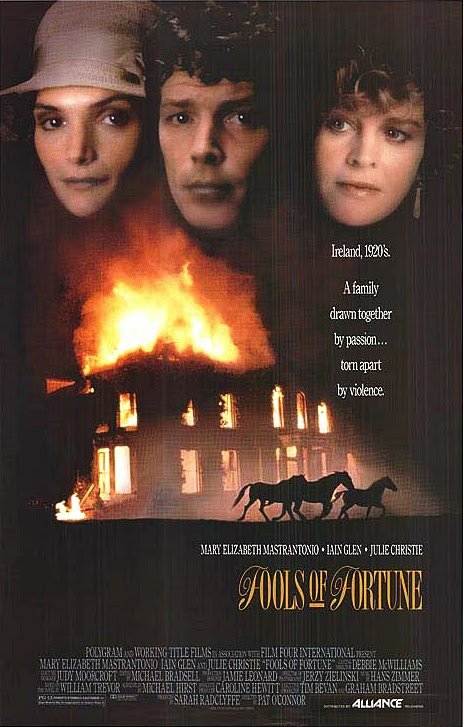 The Irish War of Independence from British rule that occurred during the 1920s is the starting point for this family saga about a peaceful Protestant family caught between the Irish Republicans and the British Army. Unfortunately, the Irish landscape, beautiful costumes and excellent cinematography cannot make up for its inconsistent storyline which jumps between past and present.

Seen through the eyes of handsome Willie Quinton, from his tragic boyhood to his even more tragic adult life, FOOLS OF FORTUNE is the story of a family’s destruction and the endurance of an unlikely love. The Quinton family seems sheltered in its grand rural home until a worker is murdered by the Republicans on charges of spying for the British.

When the Quinton clan is unwittingly dragged into the skirmish, the results are tragic. Young Willie witnesses the torching of his home and the murder of his father at the hands of a British soldier. Only Willie, his mother and Josephine, the attractive young maid, survive.

Years pass and a now-adult Willie is still taking care of his mother, who has never gotten over her loss. An embarrassment in public, she drinks heavily and turns to the liquor cabinet for comfort since she cannot bear living without her husband. The past consumes her present until she breaks one of the liquor bottles, using it to slash her wrists in a suicide attempt. Josephine feels responsible for the suicide and checks herself into a convent where she prays without ceasing for “the survivors to be comforted in their mourning.”

Willie becomes an introspective and withdrawn young man, seeking comfort and understanding in the arms of his childhood playmate and lifelong love, Marianne, who has grown into a beautiful young woman. However, by committing fornication, they perpetuate more grief and guilt. Marianne flees to Ireland after her parents disown her upon discovering that she is pregnant. Willie has disappeared, but his aunts allow Marianne to move into their house and raise the baby, a girl named Immelda.

The saga continues with a recurring theme of guilt and revenge. Willie finds the soldier who destroyed his family and murders him, but his shame prevents him from returning to Ireland, and he goes into a self-imposed exile on an island off Wales. Young Immelda wanders through the grounds of the family estate and sees visions of her father’s pain and tragedies. Finally, a message from the dying maid calls him back home, where he’s reunited with Marianne and the daughter he’s never known.

It is hard to imagine, let alone watch, so much misfortune happen to one person. Even the ancient Greeks could not have written a more tragic story than this one. Granted, the war between the IRA and the British has been going on for so long that we risk becoming inured to it. However, here, the impact on one family is characterized by so much disaster, bleakness and doom, that we’re forced to look and think.

Unfortunately, the characters in FOOLS OF FORTUNE are incapable of changing or maturing because they are bound and trapped by the past and feel they have no chance of escaping. For example, as an adult, Willie experiences and exhibits many emotions, yet he never matures or grows beyond the past.

Well, the past doesn’t go away, but the good news is that Christ offers a blanket invitation for all of humanity to become new creatures through him, a future where sins are remembered no more. This freedom is expressed in Romans 8:1-2: “There is therefore, now no condemnation for those who are in Christ Jesus.”

So don’t be a fool of misfortune enslaved to the past. Face the future with Christ!

Writer: Michael Hirst BASED ON THE NOVEL BY: William Trevor