FOOTPRINTS: ANGELS ARE REAL AND SOME EVEN HAVE FUR 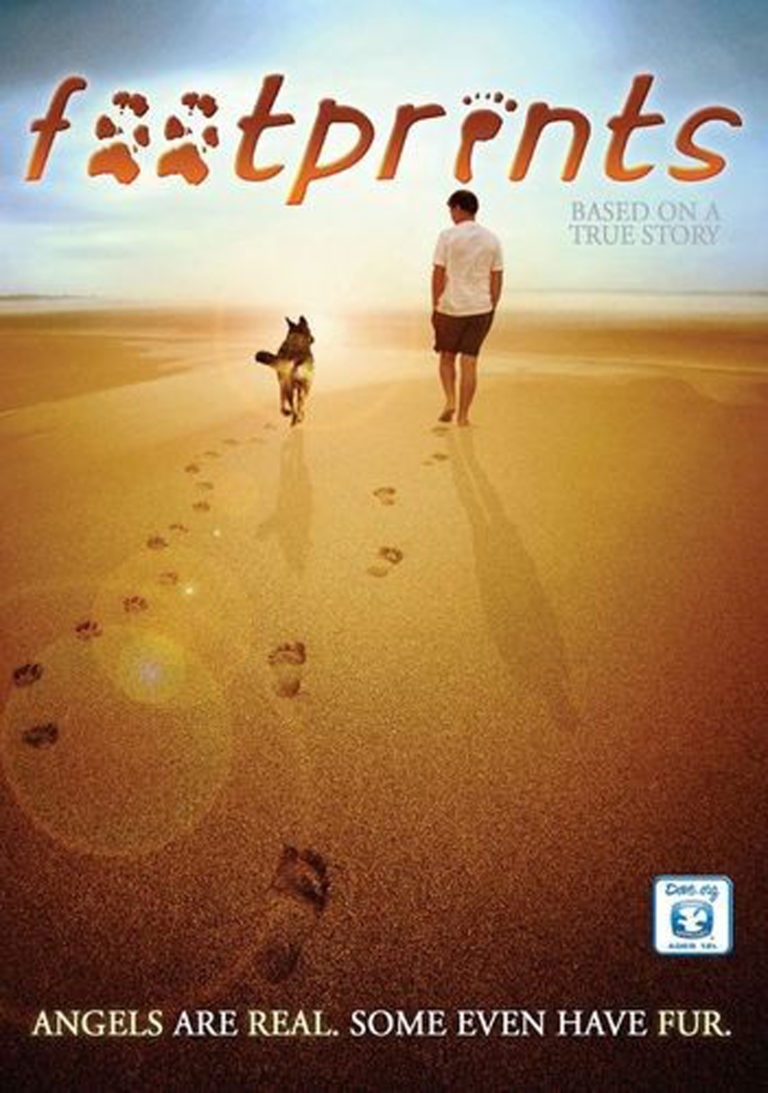 In FOOTPRINTS, David Hyler grows up in an abusive household. When his mother dies, his father takes him to live with his grandparents. His grandfather is a godly man, but his grandmother was as abusive as his father. This brought about feelings of rejection and abandonment that stayed with him until he met Cadie. Cadie, David’s new German Shepherd, was abused for years as well. Together, God uses them in ways David could have never imagined. Their story is one of the power of forgiveness in the midst of oppression.

The story in FOOTPRINTS is a touching one of a man who finds hope, love, and fulfillment in an unlikely place as he follows God’s direction. The movie tells a strong Christian story in a positive manner that has a little negative content from ambiguous theological terms. Also, spotty production quality and some overly dramatic acting slightly undermine the uplifting qualities of the movie. The effort the cast and crew put forth is evident in the wonderful message of faith in God’s plan. Although it’s low budget, it’s well worth watching and often more entertaining than many other movies.

(CCC, BBB, Ab, S, V, M) Very strong Christian, moral worldview with references to forgiveness, hope, and love with a negative view of a pastor who repents and a slight theological aberrancy that is discussed in the movie but never completely resolved; no foul language; minor violence when police arrest a man, a man throws a glass into the sink shattering it, boy has bloodied and bruised face from getting hit with a baseball bat (off-screen), and vicious dogs are tamed but not before evoking extreme jeopardy; man and presumably his wife in bed together and kissing; no nudity; no alcohol; no drugs; and, boy is abused verbally and emotionally by his father and grandmother, dog lives in abusive home before being rescued and mean cold preacher.

Based on a true story, FOOTPRINTS is subtitled: ANGELS ARE REAL AND SOME EVEN HAVE FUR. It’s an intriguing movie that approaches being a powerful, dramatic tale.

FOOTPRINTS opens with David Hyler, a software engineer who loves dogs, recalling specific scenes from his childhood that have defined his life. Suffering the verbal and emotional abuse of an unloving father, young David felt he could never do anything to please his father like his older brother could. David’s mother was his only glimmer of hope. She, as well as her mother, encourage the boy to dream and live his life to the fullest.

After a tragic accident claims his mother’s life, David is sent to live with his father’s parents, who run a seemingly empty orphanage. His grandmother is just as harsh and abusive as his father, but David has a godly example of love and forgiveness in his grandfather, Judge Hyler. Judge Hyler encourages David not to focus on anger and resentment, because they won’t produce anything good in his life, and to use his life to help others. Following his mother’s death and his father’s abandonment, David struggles to understand why God allows him to feel so hurt, unloved and abandoned.

Returning to the present, David once again feels abandoned and unloved when his closest companion, a German Shepherd named Smokey, dies from massive tumors developing along his spine. In his time of loss, he wonders why God always takes away those who love him.

At the same time, David falls in love with a pediatric dental surgeon named Hope who has a daughter named Shelby. She helps him understand God’s grace and urges him to adopt a highly abused German Shepherd named Cadie. Even the Animal Shelter has given up on Cadie. Miracle after miracle occurs, and David’s new family bonds with Cadie as Cadie becomes a therapy dog helping disadvantaged children learn to read and working with children in hospitals. When David offers to help children at Vacation Bible School, David’s pastor, unexpectedly, condemns him for bad theology.

Facing opposition from a prominent pastor and school officials, David struggles to find the courage to follow God’s unique plan. He wonders if he will always be the failure his father thought he was, or if he will someday overcome his past to further the Kingdom of God.

David’s wife, Hope, gets a call to move to New England. So he sets out on a journey to find ways Cadie can help others as a therapy dog. As David and Cadie learn to trust each other, David continues to learn about the importance of following God’s plan, even when it seems a bit unconventional. With the help of Cadie, David begins to understand how fear, anger and resentment hinder his ability to help others the way God has called him.

In New England, his ministry flourishes using the dog to help the elderly and infirm in nursing homes. By example, David shares a message of hope, love and redemption through his service to others. Then, he’s called to preach at a large church about unique creative evangelism, i.e., rescue dog evangelism. When he gets to the church, he finds out his former pastor is there and wants to expose his theological wrongdoing.

While FOOTPRINTS presents biblical ideas like following God’s plan and the importance of forgiveness, more fluidity throughout the dialogue and narration would have improved the quality of the movie greatly. The actors put forth a lot of effort, but they over-dramatize in several situations.

That said, the flashbacks are extremely well directed and acted. The jeopardy is intense throughout 60% of the movie. There’s something clearly at stake, that is, David’s survival and Cadie’s survival.

FOOTPRINTS has a very strong Christian, moral worldview with references to forgiveness, hope, and love.

Regrettably, it has a negative view of a pastor who repents, but does not set the table in the script for the pastor’s negativity. Also, the subtitle ANGELS ARE REAL AND SOME EVEN HAVE FUR is somewhat theologically confusing. The word “angel” in Greek and Hebrew means messenger and can refer to: a human messenger such as a prophet or perhaps even a dog; or, a supernatural messenger such as the creatures most people refer to as Angels that cannot be a dog or a man in orthodox biblical angelology; or, to God Himself as a theophanic angel. It would have been helpful to show that the pastor and David were speaking at cross purposes about two different types of messengers.

It should be noted that there is very minor violence in the movie including the threat of violence by abused dogs, as well as some kissing and David is abused verbally and emotionally by his father and grandmother, while Cadie the dog lives in abusive home before being rescued.

Even so, although it is low budget, it is well worth watching and often more entertaining than many other movies.