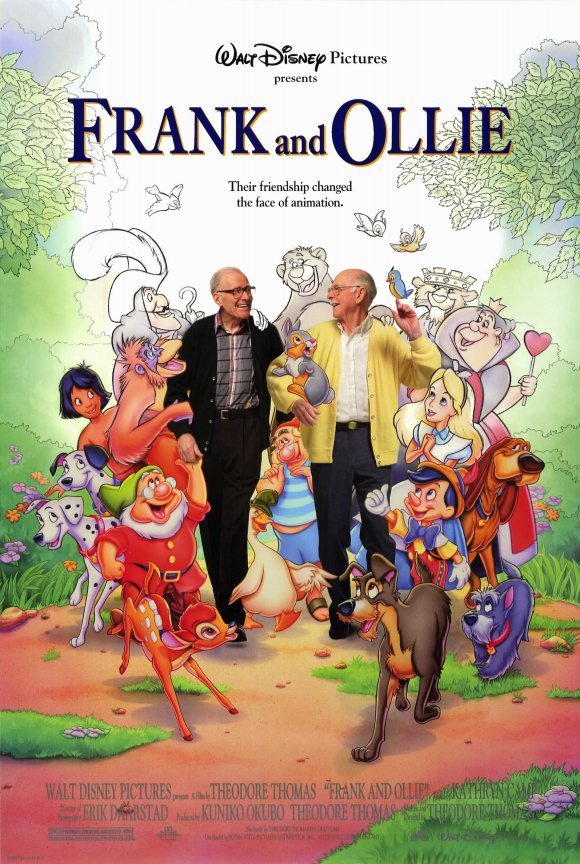 FRANK AND OLLIE is a documentary movie about legendary Disney animators Frank Thomas and Ollie Johnston. Whimsical and informative, it is a retrospective of their careers including work on BAMBI, THE ARISTOCATS and JUNGLE BOOK. Furthermore, the movie shows these men as model examples of those who have their personal and professional lives in order.

During a 43 year period, Walt Disney Pictures experienced some of its best animation under Ollie Johnston & Frank Thomas, or FRANK AND OLLIE. Extremely creative, this two-man team became part of the legendary “Nine Old Men” at Disney. FRANK AND OLLIE, the movie, is a warm retrospective of the men, their wives, their lives, and their careers. Frank Thomas and Ollie Johnston met as students at Stanford University in 1931. Frank began work at The Walt Disney Studios in 1934, and Ollie in ’35. Since then, they have been roommates, neighbors and best friends and have collaborated on most of the Disney classics including BAMBI, LADY AND THE TRAMP and JUNGLE BOOK.

Slow moving though never dull, FRANK & OLLIE will appeal mainly to adults. Not only would adults have fond memories of visiting these Disney classics at the theater, but there is sometimes brainy discussion of the creative process in animation. FRANK AND OLLIE sometimes plays like a home video, since it was created by Frank’s son. This movie shows that a caring supporting personal life can provide a stable foundation for creativity at the workplace. Declared Christian and top Disney animator, Glen Keane quotes a Bible verse in describing FRANK AND OLLIE, “As iron sharpens iron, so one man sharpens another.”

Rent or Buy FRANK AND OLLIE: