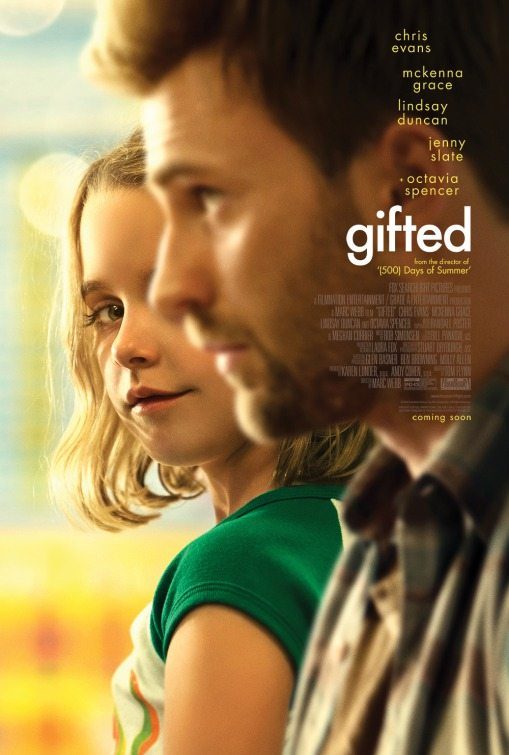 GIFTED stars Chris Evans as Frank, who takes care of his 7-year-old niece, Mary. Mary goes to school for the first time. Her teacher, Bonnie, asks the students what two plus two equals. Mary tells her that’s too simple. Bonnie starts asking her more complex questions, until Mary answers a question where most people would need a calculator. It turns Mary’s a mathematical prodigy. When Mary’s grandmother, Evelyn, hears about this, she comes to see Mary and Frank. She tells Frank that, if he doesn’t put Mary into a gifted school, she will take him to court to get custody of Mary.

GIFTED is a heartwarming movie, with some amazing acting. The most surprising talent is the young girl who plays Mary, McKenna Grace. McKenna does an amazing job playing such a gifted young girl. However, GIFTED has a mixed worldview where some strong moral elements are mixed with some humanist elements. For example, Frank shows great love for Mary, but he’s also clearly an agnostic about God. So, although GIFTED is a very heartwarming, entertaining movie, MOVIEGUIDE® advises strong or extreme caution.

(Pa, BB, HH, Acap, LL, S, N, AA, M) Light mixed worldview with strong moral and overt humanist elements, including expressions of loving other people no matter what, one very poignant pro-life moment, agnostic uncle wants his young niece to make up her own mind about God and Jesus but also tells her that atheists have the same amount of faith as Christians, and villain is niece’s grandmother, plus a light anti-capitalist comment and undertone; seven light obscenities, one GD, one light profanity; no violence; implied sex outside of marriage; upper male nudity; alcohol use and drunkenness; no smoking or drug use; and, lying and deceit by the villain, who is a grandmother.

GIFTED stars Chris Evans as Frank, who takes care of his 7-year-old niece, Mary, who’s a gifted child prodigy. GIFTED is an excellent, heartwarming movie, but it has some cautionary elements.

Frank has taken care of his 7-year-old niece, Mary, since she was a baby. She’s now at the point where she should be going to school, but she puts up a fight. Frank practically pushes Mary on the school bus.

During school, Mary’s teacher, Bonnie, asks the students what two plus two equals. Mary tells her that is so simple, then Bonnie starts asking Mary more complex questions, until Mary answers a question which has to be answered by a calculator for most people. It turns out Mary is a mathematical prodigy. When the principal arrives, Mary tells her to call Frank because she wants to go home, so she’s sent straight home.

Frank does all he can to get Mary go back to school, and believes it is best for her to learn how to be a normal child. The principal tells Frank that Mary is gifted, adding that she can get Mary a full ride to a very prestigious school that will challenge her. Thinking it over for a minute, Frank says no. He really believes that Mary needs to learn how to grow up in a realistic world.

Somehow, Frank’s mother, Evelyn, gets the information that Mary is being offered the school and flies down to see them. Evelyn tells Frank that, if he doesn’t put Mary in that school, then she will go to trial over custody for Mary. For Evelyn, she always pushed her own daughter, Dianne, to be a mathematician. However, Frank believes Evelyn pushed his sister to her suicide, Frank is ready to fight her in trial in order to keep Mary. His neighbor, Roberta, who adores Mary and is a mother figure to her, helps Frank fight the battle to keep Mary.

GIFTED is a well-made movie with some very moving parts. The most surprising talent is the young girl who plays Mary, Mckenna Grace. Mckenna does an amazing job playing such a gifted young girl. It will not be surprising that this will launch her career, much like I AM SAM did for Dakota Fanning. There are some very moving moments, containing realistic dialogue. One issue with the movie is the villain is not totally defined and is shown in a sensitive light in a few scenes. Overall, however, the movie is entertaining.

GIFTED has a mixed worldview. There are some positive moral elements, including sentiments about helping those you love and a wonderful pro-life moment that’s extremely touching. However, in one scene Mary asks Frank if God is real and if Jesus is God. Frank tells her that atheists have the same amount of faith as Christians and that he won’t give her his opinion because he wants her to make up her mind, but his opinion is clearly agnostic. At the same time, though, Frank shows his sacrifice and love by raising Mary. Finally, the movie has a strong negative attitude toward the mother/grandmother, implying she destroyed her daughter’s life. MOVIEGUIDE® is never a fan of a parent or grandparent being the villain because it puts a negative light on the family unit.

So, although GIFTED is a very heartwarming, entertaining movie, MOVIEGUIDE® advises strong or extreme caution.