"Acting Out a Rite of Passage" 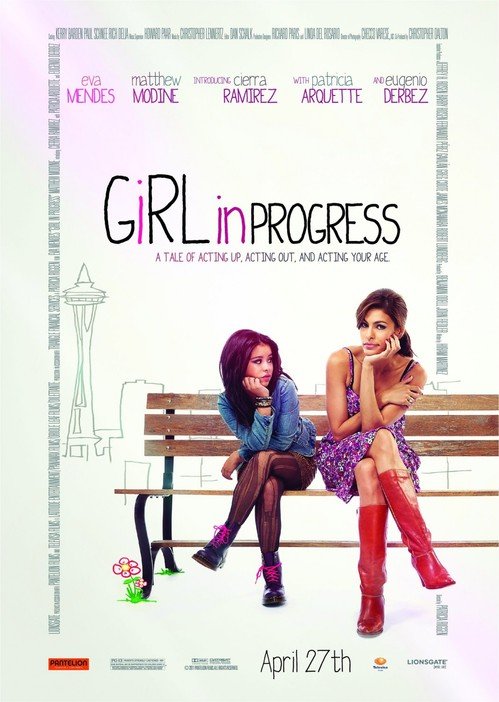 GIRL IN PROGRESS stars Eva Mendez as Grace. Grace is a single mother who had her daughter, Ansiedad, when she was just a teenager. Ansiedad has always viewed her mother as irresponsible and loose but longs for her attention. A teacher tells Ansiedad literary characters grow up when they endure a “rite of passage,” so Ansiedad suddenly longs for adulthood. She creates a “rite of passage” plan with her best friend to leave her mother behind and make her own way in the world. Regrettably, her plan involves losing her virginity. Meanwhile, her mother is having an affair with a married man, who turns out to be deceitful.

GIRL IN PROGRESS has a humanist worldview. Though the characters overcome their troubles, faith in God is not the thing that helps them. Ansiedad finally realizes she doesn’t want to lose her innocence, but it is sad how far she rebels before this happens. Even so, GIRL IN PROGRESS is entertaining, the acting is well done, and the daughter and mother eventually learn how to relate to one another. Extreme caution is advised for the movie’s heavy themes and mature content.

(HH, B, C, L, SS, N, AA, D, MM) Strong humanist worldview with the title character creating her own future, with some moral, redemptive elements such as God is mentioned during an epiphany, with character saying it’s an “oh my God” moment, and teenage girl eventually decides to stay chaste; five obscenities, four profanities, scatological humor with talk of menstruation; women slaps man in face; strong elements of sexual immorality such as talk about losing virginity as a sign of maturity and right of passage, teenage boy shown with condom implied preparing for sex, mother is having an affair with married man and kisses him; upper male nudity, girl dresses but nothing shown, scandalous clothing on teenage girl and low cut dresses on mother; alcohol use, drunkenness, underage drinking; smoking; and, strong miscellaneous immorality includes stealing, lying, dysfunctional single parent family, mother is irresponsible and a bad role model for daughter but learns to do better, daughter plans to run away from mother, daughter rebels against mother but truly wants her attention, young teenage character runs away.

GIRL IN PROGRESS is a coming age story for both a single mother and her daughter. GIRL IN PROGRESS takes on some heavy themes. Though the characters overcome their troubles, faith in God is not the thing that helps them.

In GIRL IN PROGRESS, Eva Mendez plays Grace, a single mother who had her daughter, Ansiedad, when she was just a teenager. Ansiedad has always viewed her mother as irresponsible and loose but at the same time longs for her attention. A teacher tells Ansiedad grow up when they endure a “rite of passage.” This creates a longing in her to grow up.

With help from her friend, Ansiedad creates her own plan for undergoing a rite of passage so she can finally leave her mother behind and make her own way in the world. Thinking she can almost act out the whole process, Ansiedad starts by emphasizing her innocence and studious nature. From there, she believes she must discourage her mother and teachers, reject her wholesome friend to hang out with the “wrong crowd,” have a bout with death, wear scandalous outfits, and ultimately lose her virginity.

During all this, Grace is having an affair with a married doctor. Grace works at a seafood restaurant. They give her the chance to manage the restaurant if she just shows responsibility. Knowing she has problems doing this, Grace tries to work harder and harder. This means she has to give up her dream of going back to school. After falling for the lies of her married boyfriend, Grace finally realizes he will never leave his wife and decides to end the relationship.

Ansiedad and Grace grow apart. While Ansiedad follows her plan, her friend Tavita experiences a “rite of passage” in a very negative way. Finally realizing her daughter is longing for her attention, Grace goes after her.

GIRL IN PROGRESS has a humanist worldview. Ansiedad acts out her rebellion, clearly in search of her mother’s attention, while her friend is actually in the midst of rebellion and almost dies from it. Ansiedad finally realizes she doesn’t want to lose her innocence, but it’s sad how far she rebels before this happens. Repercussions are shown from the rebellion of the two teenage girls, but there are no clear repercussions from Grace’s affair. Grace does learn she must be a better mother to Anseidad, so the movie clearly stresses Grace’s love for her daughter.

GIRL IN PROGRESS is done in high irony and the dialog is very “tell all.” The movie tries to achieve comedy by being ironic and having blunt dialog. Though entertaining, the dialog is blunt. And, the teenage daughter goes through a lot to get her mother’s attention before she and her mother finally come together.