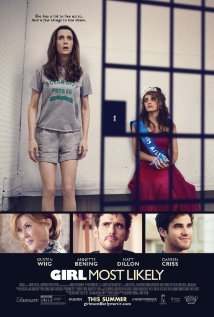 The comedy GIRL MOST LIKELY stars Kristen Wiig as Imogene, a woman having a life crisis who must return home. Imogene has just lost her job and her boyfriend, Peter. Trying to get him back, she fakes a suicide. Instead of Peter coming to her aid, her mother Zelda does. The doctor tells Zelda she must watch her daughter for the next couple days. This leads Imogene into even more of a crisis.

GIRL MOST LIKELY has a light moral, redemptive worldview with a message to give to others and being loyal to family. In the end, Imogene realizes she most love her family even for their quirks. She also learns to sacrifice for the entire family. Despite this, there are some cautionary elements of drunkenness, implied sex outside of marriage, and too much foul and crude language. GIRL MOST LIKELY is a quirky movie but doesn’t always hit the mark. Kristen Wiig is great at depicting emotions through facial expressions. Overall, the movie is fun, but flawed. Ultimately, GIRL MOST LIKELY is not as memorable as it could have been.

(B, C, Pa, Ho, LLL, V, SS, N, AA, D, MM) Light moral, redemptive worldview of loyalty and sacrifice, slight New Age pagan content when women reads someone’s “energy” but this is seen as a joke, along with a man being a samurai and some homosexual mentions of lesbians; 18 obscenities, including one “f” word in subtitles and 31 profanities, plus some vomiting and woman shown on toilet; women on toilet; man held at gun point and gun firing but doesn’t harm anyone, small automobile crash; strong sexual content but not extreme with implied sex outside of marriage, some crude comments, sexual sounds, sexual spanking, mentions of lesbians, and sexual dancing; upper male nudity, female in underwear, and scantily clad female outfits; drinking and drunkenness; smoking, but no drug use; and, lying and absent father.

The comedy GIRL MOST LIKELY, now on DVD, stars Kristen Wiig as Imogene, a woman having a life crisis who must return home. GIRL MOST LIKELY tries to be a quirky movie but doesn’t always hit the mark, and has some mixed positive and negative content.

Imogene has been living with her boyfriend, Peter, for years, but he has decided to move out, almost right after Imogene loses her job. Completely distressed, Imogene fakes her suicide in order for Peter to come back to her. He doesn’t come. Instead, her mother, Zelda, comes to get her, and the the doctor says she must be watched for the next few days.

Imogene is completely resistant to going with her mother, however, because she feels she’s better than she is. Zelda is a gambler and a bit trashy. Imogene has rejected her home and instead has built an expensive life for herself in glamorous New York City.

When Zelda takes Imogene back home, Imogene runs into her old room and finds a rent tenant who’s taken over, Lee. Lee is a young man who met Zelda while performing at a casino. What Imogene doesn’t know yet is that, at the age of 17, Lee went to Yale University.

Imogene also runs into her mother Zelda’s boyfriend, George aka The Bousche. This throws her off. The Bousche is supposedly a secret agent with the CIA, an idea that Imogene immediately doesn’t trust. Later on, The Bousche accidently reveals to Imogene and her brother, Ralph, that their father is still alive. All Imogene’s life, she thought her father had died, but really Zelda told them a lie. Once Imogene knows this, she immediately researches him and finds his book on how Thanksgiving was fake. Thrilled that her father is an accomplished writer, Imogene feels she must meet him.

In the end, Imogene realizes that her mother was looking out for the entire family. Many of the things that Imogene didn’t believe to be true came out to be true. Imogene also learns to sacrifice for the entire family and not just reject them because of their quirky nature and flaws. Overall, GIRL MOST LIKELY displays a moral worldview with a message to give to others and loyalty to family. There are some cautionary elements of drunkenness, implied sex outside of marriage, some crude comments, and too much foul language.

GIRL MOST LIKELY is a quirky movie but it doesn’t always work. Kristen Wiig is great at depicting emotions through her facial expressions. Overall, however, the movie was nice, but flawed. Ultimately, GIRL MOST LIKELY is not as memorable as it could have been.