"A Good Time Will Not Be Had by All" 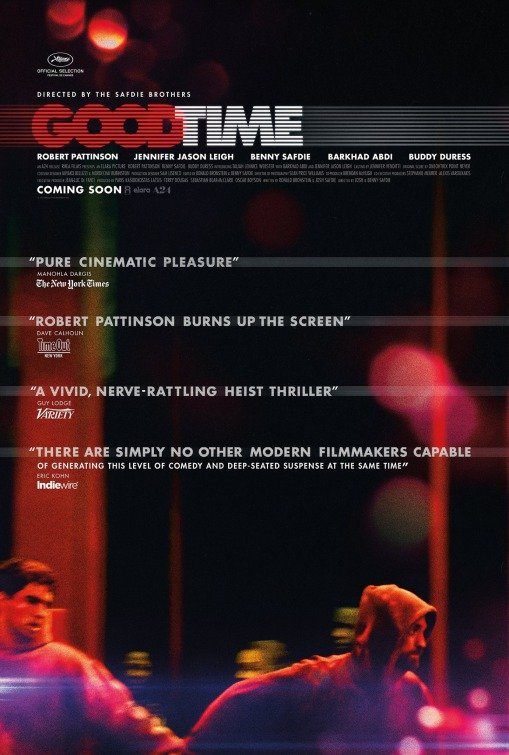 GOOD TIME follows the story of a small-time, sleazy criminal who organizes a bank robbery with his mentally disabled brother. Connie bursts into a psychiatry session involving his mentally disabled brother, Nick, to rob the bank. The robbery goes wrong, however. During the getaway, Nick is separated from Connie and crashes through a window. This allows the police to arrest him and put him in the hospital. Connie tries to sneak his brother out of the hospital but fails. He then tries to retrieve some of the PCP he used to subdue a security guard to get the money to bail out his brother.

GOOD TIME has some well-executed action sequences, with Robert Pattinson of the TWILIGHT movies delivering an outstanding performance as the sleazy Connie. However, the movie is utterly disgusting and abhorrent on a moral level. The main character makes out with a teenage girl and uses lies and deception to get away with a bank robbery. GOOD TIME also has abundant foul language, a graphic bedroom scene, some extreme violence, utterly no one to like, and excessive drug content.

(PaPaPa, LLL, VVV, SS, NN, AA, DDD, MMM) Very strong pagan worldview where bank robber ruthlessly lies and deceives his way through a night where he is trying to seize his mentally disabled brother from police custody; at least 170 obscenities (more than 125 “f” words), 12 strong profanities and two light profanities; some very strong and strong violence includes shootout with police results in a getaway driver being killed when he is shot and crashes, several bloody beatings such as man is beaten severely in a prison cell, with an extremely raw and bloody face resulting, security guard is knocked out, man trying to escape police climbs on a high-rise window ledge and eventually falls to his death; brief but graphic fornication scene, man passionately kisses 16-year-old girl while she’s wearing only a shirt and panties to distract her from seeing his mugshot on the TV news, and they nearly fornicate before being interrupted; images of upper female nudity and sex toys in haunted house attraction and rear male nudity in depicted fornication scene; alcohol use and drunkenness in one scene; tobacco smoking, character smokes marijuana, man takes OxyContin narcotic, security guard is given a PCP-laced soda, and he freaks out, and much of the plot centers around trying to find a bottle of soda laced with the illegal drug PCP in hopes of selling it; and, very strong miscellaneous immorality includes bank robbery, deception, man takes advantage of his mentally disabled brother, man sneaks into a hospital and deceives a police officer in order to remove a criminal from a hospital room, man then deceives his way into a getaway and hideout, man steals car and leads police on a reckless chase, man convinces woman to demand a credit card from her mother to post a $15,000 bail for his mentally disabled brother, but he knows he’ll never repay the debt, and woman screams horribly at her mother, with vile taunts.

GOOD TIME follows the story of a small-time, sleazy criminal named Connie, who conducts a bank robbery with his mentally disabled brother Nick, exploiting him for extra muscle in the operation. Nick is first seen speaking with a psychiatrist and expresses dull-witted dismay about their treatment by their grandmother, when Connie bursts in and forces him to go to the bank robbery.

Connie has convinced Nick that they will use the $60,000 they hope to steal in order to buy their own place and get away from a life they describe as rough at the hands of their grandmother. (However, when she’s seen later, the grandmother seems like an innocent, doting old lady, so this is probably another form of deception by Connie.) Connie insists that the female teller get more money from the back of the bank, but he fails to notice that his request gives her the chance to load the money bag with an exploding dye pack.

When the brothers are forced to go on the run by foot as a result of the fact they’re covered in dye, Nick is separated from Connie and crashes through a window. This results in his capture and hospitalization by police.

Connie learns he only has $15,000 instead of his expected haul, and Nick is being held on $25,000 bail. So, Connie engages in a series of lies, deceptions, and all manner of criminal activity to sneak his brother out of the hospital and make a real getaway.

SPOILER ALERT: The problems escalate when Connie realizes he’s has taken the wrong bandage-covered man from the hospital, with his brother still in custody, and the man he actually absconded with being a huge menace. Connie winds up crossing more dangerous criminal associates of the other man while trying to retrieve a PCP-laden bottle of soda in order to sell it to raise the bail money for his brother. END SPOILER.

GOOD TIME has some hard-charging action, with Robert Pattinson delivering an outstanding performance as the utterly sleazy Connie. However, the movie is utterly disgusting on a moral level, with Connie even “making out” with a 16-year-old African-American girl to distract her from his mugshot on the local news while he hides in her own unwitting grandmother’s house.

Foul language is constant in GOOD TIME. There’s also an extremely graphic and bloody beating, and utterly no one to like, along with some strong sexual content and excessive drug references and abuse. Much of the story, in fact, is built on deception, including deception of family members. The movie also has some ridiculous lapses in logic. For example, a woman allows Connie and the bandaged Ray into her house in the middle of the night despite the fact it should be obvious the two are up to no good. Also, her teenage granddaughter goes along with their criminal escapades without batting an eyelash.

Ultimately, GOOD TIME has some terrific pacing, interesting camerawork and an excellent performance by Robert Pattinson, but is so offensive morally that discerning viewers should be directed to find a good time at just about any other movie in the multiplex.

Executive Producer: Time Will Not Be Had by All **