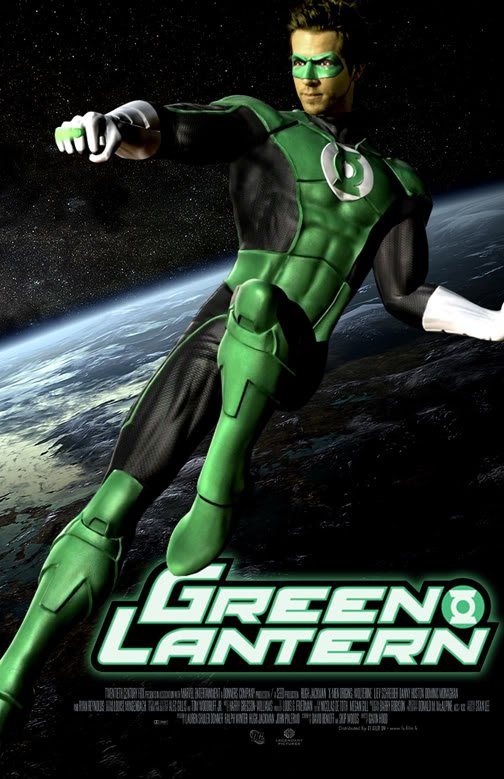 The new GREEN LANTERN movie stars Ryan Reynolds as Hal Jordan, the Green Lantern. A hotshot test pilot and irresponsible playboy, Hal fears he doesn’t measure up as the newest member of the Green Lantern Corps, a cadre of alien peacekeepers who fight evil to promote peace, order and justice. When Parallax, the ancient enemy of the Green Lanterns who’s harnessed the corruptive yellow power of fear, threatens all of Earth, Hal must summon the moral courage to stand up to evil. Hal also must convince his fellow Green Lanterns not to forge their own yellow rings of fear to fight fire with fire.

GREEN LANTERN is incredibly exciting and lots of fun. The 3-D special effects and photography are truly amazing and visually stunning. Ryan Reynolds is a very sympathetic, credible Green Lantern. There are some obscenities, profanities, innuendoes, and nominalistic elements of magical thinking in GREEN LANTERN. Everything, however, leads to a morally uplifting, redemptive conclusion extolling responsibility and having the moral courage to stand up to strong evil. Strong caution is recommended, but GREEN LANTERN is a very entertaining movie with some valuable lessons and positive values.

(BB, PaPa, FRFR, C, PP, CapCap, LL, VV, S, N, A, M) Strong moral worldview and premise, sometimes implied, about an irresponsible pilot and playboy who sometimes curses but learns how to be more responsible and moral when he’s chosen to join an ancient intergalactic corps of alien peacekeepers who keep peace, order and justice and fight against evil, with moral themes of becoming responsible, taking a moral oath to fight evil always and everywhere, protecting people from mean villains lusting after power and/or trying to kill people and consume their souls, and courage to fight evil conquers fear and lust, spoiled by some strong pagan but mixed nominalistic elements where peacekeepers can use willpower to conjure up things out of nothing to help them fight evil though in the end courage (especially the courage to fight evil and conquer fear and lust) proves to be the stronger power, plus some Christian, redemptive elements regarding forgiveness and apologizing to those one has wronged in addition to being chosen by a higher power and making a sacrifice to save the human race, peacekeepers are strongly patriotic, and strong pro-capitalist elements where hero’s love interest works for her father’s company, a military contractor; 12 mostly light obscenities (mostly “h” words but a few “s” words), three strong profanities and four light exclamatory profanities; strong, intense action violence includes evil being kills three good peacekeepers and appears to consume their souls, spaceship crashes, alien dies, pilot almost dies, flashback where pilot sees his father’s plane explode when he’s a boy, hero’s training involves fighting and being flung against objects and building structures, scientist gets infected by evil alien power when he autopsies body of dead alien, villain flings people about and tries to kill them, villain tries to make helicopter crash and kill his senator father while also killing innocent bystanders, helicopter crashes into objects as people flee in terror, villain tries to infect female with evil alien power from his blood through a hypodermic needle, hero fights main villain as he tries to destroy earth and keeps killing innocent bystanders and apparently consumes their souls, and some images of skeletons; light sexual content includes implied fornication when protagonist wakes up next to minor female character, light double entendres in discussion about relationship between hero and his love interest, brief discussion implies hero and love interest slept together in the past, and a passionate kiss occurs; brief upper male nudity; brief alcohol use; no smoking or drugs; and, irresponsibility but rebuked, hero tricks one villain by not revealing the truth in one scene, and ancient “immortal” beings called “Guardians of the Universe” seem like gods but movie later reveals they are flawed.

GREEN LANTERN may be the most exciting, spectacular, inspiring superhero movie since SPIDER-MAN 2. Though not quite as good, profound or positive as that great movie, it has many good things in it, though it still requires some caution for its problems, many of which are overcome.

The movie opens with a brief explanation how the “Guardians of the Universe,” an ancient race of immortal human-like beings, harnessed the power of “Will” and created the Green Lantern Corps to fight evil and promote “peace, order and justice.” One of their members, however, decided to harness the power of “Fear” to rule the universe and became the evil being called Parallax. Using the emerald green power of special rings, which allows them to conjure up whatever their imaginations can conceive, the Green Lanterns eventually were able to imprison Parallax on a barren planet.

Thousands of years later, Parallax breaks his bonds, kills three Green Lanterns and fatally injures the most heroic Green Lantern ever, Abin Sur. Abin Sur crash lands on earth. As he’s dying, he commands his ring to find a replacement for him. The ring’s power whisks test pilot and irresponsible playboy Hal Jordan to Abin Sur’s side. Abin Sur gives the ring and its power lantern to Hal, telling Hal to say the Green Lantern oath and become a member of the Corps. Hal buries Abin Sur and flees home, just as government helicopters arrive.

Hal doesn’t know what the oath for the Green Lantern Corps is, but the ring and the lantern bring it to his mind. They also transport him to Oa, the home planet of the Corps, where Hal gets instruction from several Corps members, including Sinestro. They tell Hal that the power of the ring and its lantern enables Corps members to conjure up various weapons, powers and devices to help them fight evil and help people, including flying. Hal, whose pilot father died in a jet explosion while a young Hal watched, is afraid he can’t measure up. When he fails several tests, Hal returns home in shame, with plans to resign from the Green Lanterns.

Those plans go by the wayside when Hector Hammond, a scientist examining the body of Abin Sur, the alien who gave Hal his ring, is infected by the yellow power of fear that the evil Parallax used to kill Abin Sur. Hector has his own issues with his own father, a senator working with the military aircraft company led by Hal’s love interest, Carol Ferris, the owner’s daughter. Hector can now read his father’s thoughts about being disappointed about his son. So, Hector tries to crash his father’s helicopter as it takes off from a special outdoor celebration for Carol’s company, Ferris Aircraft. This endangers the lives of everyone at the party, including Carol’s. Hal uses the power of his ring to save everyone’s life. Afterwards, he shows up in his Green Lantern mask and costume at Carol’s place, but she recognizes him. Then, after learning about the Green Lantern Corps, Carol becomes disappointed when she learns Hal still has decided to resign.

[SPOILERS FOLLOW] Hector, however, becomes more powerful, is commanded by Parallax to kill Hal and threatens to infect Carol with the yellow power of fear so she can become his partner. This forces Hal to take action. In the mayhem that follows, Hal learns that the Guardians of the Universe and the Corps have decided to let Parallax destroy Earth and consume its power (including the power of all human souls on Earth), while they forge their own yellow ring of fear to fight fire with fire. Hal opposes their plans, making a very good speech that, once they use the evil power of fear, the Guardians and the Corps will destroy any goodness within themselves, just as Parallax and Hector have done.

Hal flies back to Earth to oppose Parallax on his own, to the death of one or the other. The question becomes, how can Hal overcome his own fears of falling short so he can defeat Parallax and save Earth?

GREEN LANTERN is incredibly exciting and lots of fun. The 3-D special effects are truly amazing. Also, Ryan Reynolds makes a very sympathetic, credible Green Lantern. His interactions with the other actors and characters are entertaining and ultimately very inspiring.

The first of the two major problems with the movie are the fact that Hal Jordan is clearly an irresponsible playboy. In fact, the first time viewers see him is waking up next to some woman and rushing off to do a fight simulation against Ferris Aircraft’s new drone jet fighters. Also, when the simulation doesn’t come off so well, Hal curses several times, using a couple strong profanities.

This problem is resolved in a positive way, however. As Hal becomes more heroic and more responsible using his Green Lantern powers, he also becomes more worthy of admiration and uses almost no foul language. This sets up the main moral premise of the whole movie [SPOILER ALERT], which is that courage, especially moral courage, conquers fear. Thus, in this movie, it’s Hal’s courage that enables him to control (if not conquer) his own fear and defeat evil. Hal’s courage not only conquers fear. It also conquers the obvious lust that comes when the two villains, whether Hector or Parallax, use the yellow power of fear. Thus, Parallax overtly lusts for more power, including the power of life that all beings have, to get his revenge on the Green Lantern Corps and destroy them. Also, Hector not only lusts for power; he also lusts for Carol, which makes him Hal’s personal rival and nemesis.

The other big problem with the movie, which is not fully resolved, is the nominalistic motif of the green power of Will, which allows Hal’s ring and lantern to enable Hal to make his thoughts real and conjure up weapons, powers and devices to fight the villains and protect people or save their lives. Thus, though Hal rightly warns the Guardians and the Green Lantern Corps, including Sinestro, about using the corrupting evil yellow power of fear and lust to destroy Parallax, his Green Lantern power is an example of magical, nominalistic thinking.

In effect, therefore, Hal Jordan’s story of victory over evil in GREEN LANTERN is a story that all of us should take to heart. As the great politician and political philosopher Edmund Burke once said, evil always prevails when good people decide to do nothing.

Of course, as the Apostle Paul notes in Titus 2:11-14, it’s ultimately God’s Grace in our Savior Jesus Christ and His sacrifice, working through us, that teaches and enables us to reject evil, live moral lives and do good works:

“The grace of God has appeared that offers salvation to all people. It teaches us to say ‘No’ to ungodliness and worldly passions, and to live self-controlled, upright and godly lives in this present age, while we wait for the blessed hope – the appearing of the glory of our great God and Savior, Jesus Christ, who gave himself for us to redeem us from all wickedness and to purify for himself a people that are his very own, eager to do what is good.”

All in all, GREEN LANTERN is an excellent, riveting, visually stunning action movie full of humor and emotion. Though strong caution is recommended because of the foul language, light innuendo and nominalistic elements, it’s a good movie with some valuable lessons and positive, eternal values for all people everywhere.