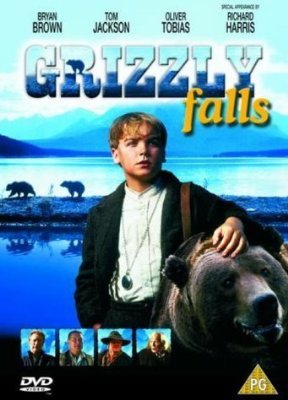 GRIZZLY FALLS is not saccharine. It is a well-made adventure story about a young boy who joins his father in the backwoods to trap a bear. With only a few obscenities and some action violence, this movie has a strong moral worldview with a mention of faith and one mention of a magical compass as well as a bear that seems too good to be true.

Strong moral worldview with a mention of faith & one mention of magical compass as well as a bear that seems too good to be true; 4 obscenities & 3 "Oh, God's"; adventure violence including bear mauls dogs, bear attacks man, animals are shot, men get hit by falling log & break bones, not too bloody but sometimes intense; boy's mother dies peacefully; no sex; no nudity; alcohol use & barroom scene; and, gambling & rough backwoodsmen.

GRIZZLY FALLS is not a GRIZZLY ADAMS movie. It is not saccharine or feel-good. It is a well-made adventure story that harkens back to the adventures of yesteryear.

The movie opens in the wilderness with old Harry, played by Richard Harris, telling his grandchildren that he knows everything about bears. Cut to young Harry (Oliver Tobias) living in Chicago many years before in a proper Victorian mansion. Young Harry’s mother longs for her adventurer husband, Tyrone (Bryan Brown), to come home. Her husband doesn’t because he is on a quest, as the audience later discovers.

Regrettably, Harry’s mother dies of consumption, and Harry is sent to a boarding school. There, Harry longs for his father to come see him. Eventually his father does and takes him into the American wilderness where his father assembles an Indian guide named Joshua (Tom Jackson) and some rough back woodsmen so that he can be the first man to trap and not kill a grizzly bear.

Tyrone, though pleasant, seems distant. Woodsman Joshua tells young Harry that Harry’s father’s father disappeared at Grizzly Falls when Harry’s father was a young man. Truly, Harry’s father is trying to fill the void left by the disappearance of his own father.

When they happen on a grizzly and her two cubs, however the sedative darts do not put the Grizzly out. One man gets mauled, some dogs get killed, and the grizzly takes young Harry captive in retaliation for Tyrone taking her cubs captive. The rest of this exciting movie involves Tyrone trying to find his son with the help of Joshua, and Harry learning how to live in the wilderness with the grizzly.

GRIZZLY FALLS is a extremely well made. It is not what one would expect from a wilderness movie. It is exciting and captivating. At several points, it has the audience on the edge of their seat. The characters are real, and the audience is concerned about them.

Probably the only question mark is the friendship that Harry strikes up with the grizzly. This is, after all, a dangerous wild animal and these types of friendship generally don’t represent an accurate portrait of the wilderness. However, the other aspects of the film were so good that one quickly overlooks the sagacious compassion of the grizzly. You may want to remind your children, however, that grizzly bears are not pets. Otherwise, this is a wonderful adventure, a film that children will enjoy, especially little boys. It deserves a big audience.

Writer: Richard Beattie BASED ON A STORY BY: Stuart Margolin