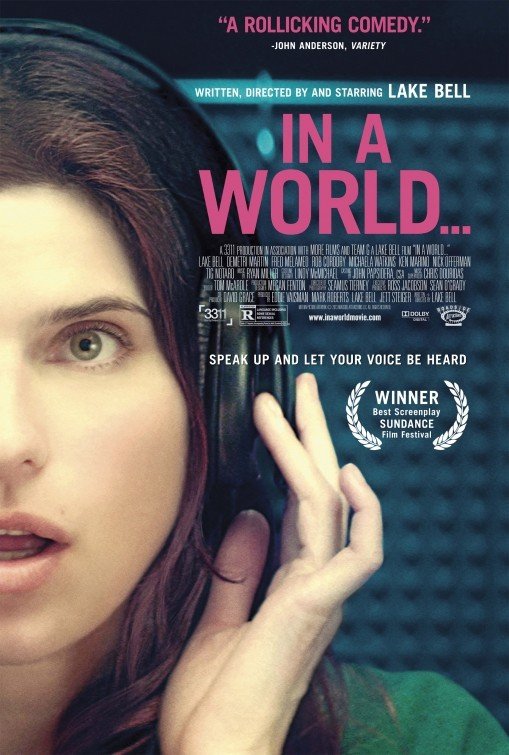 IN A WORLD. . . is all about finding your voice. It follows Carol, a 30-year-old vocal coach, as she tries to break into the male-dominated world of voiceovers. She goes up in competition against the reigning king of that circle, Sam, who also happens to be her father. Aiding Carol in her endeavors is her friend Louis, a sound engineer trying to engineer a romantic relationship with her. Meanwhile, her sister and brother-in-law try to reconcile their marriage after dishonesty and unrequited infidelity enter their relationship. As Carol tries to become a player in a game dominated by men, she will have to learn how to stay true herself while following her dreams.

Actress Lake Bell runs a one-woman show on INTO A WORLD…: writing, producing, directing, and starring in the project. Her movie is well made with a moralistic worldview extolling family and following your dreams. However, there’s plenty of foul language in the movie, plus many light innuendoes, alcohol abuse and various other moral issues. So, MOVIEGUIDE® advises extreme caution for IN A WORLD. . .

(B, RoRo, Fe, Ho, LLL, S, N, AA, DD, MM) Light moral worldview extols family, marriage, charity, and determination diluted by some relativistic Romantic content about language, sexual promiscuity, alcohol abuse, and some light feminism, plus brief homosexuality where an apparent lesbian asks a 30-year-old woman out for a drink; 42 obscenities (including some “f” words) and 21 profanities, plus two scatological references; no violence; many light sexual innuendos and double entendres plus implied fornication, kissing (including implied kissing between a wife and a man who isn’t her husband, but wife runs away in shame before anything more happens), and an apparent lesbian asks 30-year-old woman out for a drink; upper male nudity, man in a speedo, naturalistic rear male nudity in a steam room, and implied female nudity but not explicitly shown; social drinking, young woman passed out on couch, young woman blacks out after drinking and doesn’t remember the night (but it’s rebuked); no smoking; no illegal drug use shown but characters talk about their mother who overdosed and it’s used for a laugh; revenge but rebuked, greed but rebuked, light racism, lying but rebuked, infidelity but rebuked, misogyny but rebuked, and pride but rebuked.

IN A WORLD. . . is a comedy by actress Lake Bell about a struggling vocal coach (played by Bell) who tries to make it big in the cutthroat world of voiceovers, despite her discouraging father, the current king of that genre. While well written, acted, filmed, and filled with some moral values and lessons toward the end, IN A WORLD. . . also contains plenty of foul language and many light innuendoes and double entendres. This turns what could have been a PG-13 movie into an R-rated one.

The movie opens with 30-year-old Carol Solomon being told by her father Sam, a living legend in the male-dominated world of voiceovers, that she must move out of his apartment so his 30-year-old girlfriend can live with him. This forces her to stay with her older sister, Dani, and Dani’s husband, Gary. Dani and Gary have fallen into a lull in their own married lives.

Carol works at a voice studio with her charming but goofy friend Louis, a sound engineer who has a crush on her. Louis helps Carol get her first voice over gig, beating out successful playboy Gustav Warner, who’s also the protégé of her father. Carol begins to book project after project and appears on the radar of some important filmmakers.

At an industry event, Carol has a one-night stand with Gustav (who’s hosting the party), without either one realizing the other’s identity. After Gustav learns of Carol’s success, he vows to make her pay for taking his job.

Meanwhile, Gary is flirting with his and Dani’s young neighbor, and Dani is flirting with a guest at the hotel where she works. Both are struggling in being honest with each other. Dani takes her flirtation a bit further when she agrees to meet with the guest one on one in his room. Later, it’s revealed that they kissed, but, when he tried to go further, Dani fled. Before Dani has the opportunity to tell Gary, he discovers it for himself, and walks out.

While consoling her sister, Carol hears of a massive “quadrilogy” in need of a voice. It’s the role of a lifetime, centering on the quintessential voiceover line “In a World.” Carol’s father, who previously declined the role, finds out Carol is in the running, so he jumps back into the running. He tries to discourage Carol while secretly pursuing the role for himself.

While Carol, Sam and Gustav all fight for the role, they also seem to be fighting against something greater. It’s a battle between women and men, father and daughter, and newcomers versus old.

As the fight continues, will Carol be able to shine free from the shadow of her father? Will Dani and Gary reconcile and rekindle their love? Will nice guy Louis get a chance with Carol? Will Gustav and Sam learn their lesson? Will the good prevail?

IN A WORLD. . . is well made. The story is entertaining, the dialogue fast paced and witty, the actors shine in their respective roles, and the photography is beautiful. Even the overarching pro family theme is commendable, along with the themes of following one’s calling, not sleeping around and helping others. The protagonist’s sister even gives a strong speech about how she almost ruined her marriage by considering cheating on her husband.

Sadly, however, the movie’s morally positive content is negatively affected by plenty of offensive foul language and many light innuendos. They color the entire movie and few scenes are free of them. The movie also has implied sex, a brief homosexual reference, jokes about overdosing on drugs, and drunkenness (though the latter is rebuked). Most of this negative content is gratuitous and superfluous. It also limits the size of the audience for IN A WORLD. . . Therefore, MOVIEGUIDE® advises extreme caution.