"Occult Evil Wins Out in the End – Again" 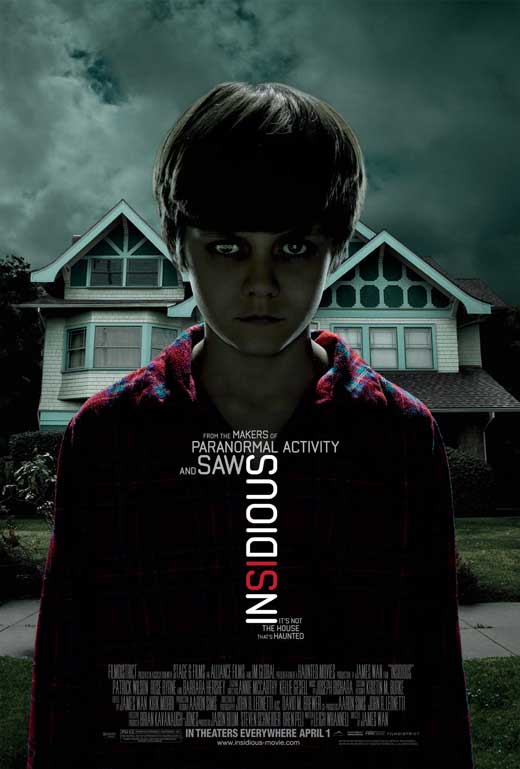 INSIDIOUS is a horror movie aimed at teenagers about a young family that’s haunted by a demon and by evil ghosts wanting to possess the family’s bodies. One of the family’s two young sons suddenly lapses into a three-month coma during the early part of the hauntings. The parents bring their comatose son back home, where the hauntings increase. The mother convinces the father to move out, but the hauntings continue in their new home. Then, the family learns they are being haunted because the father and the comatose son have an ability to project their spirits out of their body. This leaves them vulnerable to possession by the demon or the evil ghosts.

The scenes featuring the poltergeist effects, the demon and the evil ghosts are very scary. INSIDIOUS breaks down a bit in the middle, however, with some silly dialogue and a couple goofy haunting scenes. Thus, many young people who see INSIDIOUS may not, in the end, take it very seriously. The problem is, however, that INSIDIOUS has a very strong and abhorrent occult, New Age worldview where the main evil ghost wins out in the end.

(OOO, PaPaPa, B, FRFRFR, C, LL, VV, MM) Very strong occult New Age pagan worldview with very strong New Age, occult references to “astral projection,” which becomes the main explanation in the plot, with a demon and ghosts (or spirits) of evil dead people haunting a family and the main bad ghost that’s been haunting the father since childhood is finally victorious in the end, and including references to the danger of being possessed by the demon or the ghosts because your spirit has projected outside your body, plus some moral elements of family fighting off demon and evil ghosts, including father trying to save his son, but evil wins out in the end, plus very strong false religion that (among other things) calls Hell by another name so (in effect) movie avoids all Christian doctrine though it is implied that the mother in the family consulted a friend who’s a priest but the priest only appears in one brief scene and the family ultimately consults a New Age, vaguely spiritualist psychic/expert and her ghost hunter team; one “f” word, three “h” words, one “b” word, three strong profanities using Jesus, one GD, and 12 light profanities such as My God, God, For God’s sake; very scary strong violence involving demon and evil ghosts haunting a family including boy falls off ladder, doors slam, demon chases people in the real world and a nether world, demon and ghosts attack people and haunt them, boy falls into deep coma that lasts for three months, evil ghosts move objects, a supernatural wrecks a boy’s room but only the sounds are heard and only the after-effects are shown, a character is strangled to death, and ghosts re-enact a murder of three family members from the past but only the gunshots are heard and then three dead bodies are shown with one or two of them having bullet holes; no sex; no nudity; no alcohol use; no smoking; and, mother hides truth from adult son about an evil ghost haunting him when he was a child, movie shows that an older girl had turned against her family and brutally, happily murdered them, movie completely avoids any talk about God, Jesus Christ or the Bible yet it deals with supernatural and theological issues.

INSIDIOUS is a very scary PG-13 horror movie aimed at teenagers and young adults. It may be the scariest movie to come along in years, but it has a very strong and abhorrent occult, New Age worldview where one of the two main supernatural villains wins in the end. Young people may not take such a movie seriously, but there’s a very real danger that the movie’s acceptance of New Age, occult and spiritualist ideas will infect their mental, spiritual and emotional condition.

Basically, the story of INSIDIOUS is about a young family that’s haunted by a demon and by a group of evil ghosts wanting to possess the family’s bodies. First, they haunt one of the family’s two little boys. The boy suddenly falls into a coma. Three months later, the parents bring him back home, but the demon and ghosts keep haunting the family.

The mother convinces the father to move out of the house, but the hauntings continue in their new home. Then, the father’s mother reveals he was haunted by the evil ghost of an old dead woman when he was young. She calls in a psychic “expert” who tells the family that the father and the son have a talent for astral projection, the ability to project their spirits away from their bodies. She explains that this leaves them vulnerable to demons and evil ghosts from a hellish netherworld she calls “The Further.” Now, it’s up to the father to astral project and retrieve the spirit of his comatose son, who’s being held captive in the nether world by the demon.

The scenes featuring the poltergeist effects, the demon and the evil ghosts are admittedly very scary. Perhaps even the scariest scenes in years. INSIDIOUS breaks down a little in the middle, however. That breakdown includes some intentionally funny scenes but also some silly dialogue and supernatural events that are goofy rather than really scary, like the scene where the demon crawls along a wall in the family’s home. Thus, many young people (and even many adults) who see INSIDIOUS may not, in the end, take it very seriously.

The problem is, however, that the movie has a very strong occult, pagan worldview with New Age content and false theology, including ghosts, the New Age concept of astral projection, spiritualism, and possession by evil spirits or demons. Also, it does all these things without mentioning God, Jesus Christ or the Bible, even though a priest shows up very briefly at the family’s second home, apparently to comfort the mother, then leaves. (Unless you count the profanities in the movie.) Furthermore, as with all too many horror movies these days, evil wins out in the end. All these things make one ask, “If evil and evil demons actually exist, where does one get these notions?”

This is why, of course, the most serious, most intelligent Christians rely on the Bible and its depiction of Jesus Christ and His teachings for their basic philosophy and worldview. Otherwise, human beings have a tendency to make up things on their own, and 90% or more of such things simply are false and imaginary, if not tinged or consumed with evil.

“All Scripture is God-breathed and is useful for teaching, rebuking, correcting, and training in righteousness, so that the servant of God may be thoroughly equipped for every good work.”