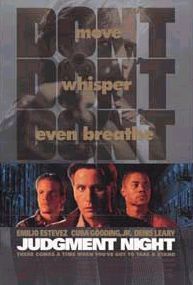 In the film JUDGMENT NIGHT, four suburban youths wind up on one of Chicago's inner-city streets just in time to witness a murder and end up being stalked by the killer. The film contains brilliant cinematography, but is marred by extreme violence, foul language and revenge.

(H, LL, VVV, A/D, M) Humanism; 15 obscenities and several profanities; extreme violence relating to the streets and all its cruelty, with an impact similar to the evening news; drinking seen in a negative light with evil consequences & an impaired judgment resulting from intoxication; and, a revenge motif.

JUDGMENT NIGHT with its raw and biting scenes becomes a wakeup call on top of the walls of our cinematic screens. The filmmaker has become the town crier, so to speak, frantically urging a complacent America to respond to its own urban decay. Four suburban youths set out to enjoy a night on the town but because of a wrong turn, wind up in a Chicago inner-city ghetto where they witness a murder. The killer and his gang hunt them to kill the crime’s only witnesses. The film intensifies as the young men become hunted victims in a cat and mouse chase, but they also find unexpected strengths and courage, undiscovered before now. Friendship, unity and courage are each examined in this fine film along with the weaknesses and fears anyone of us could encounter in today’s violent era.

With brilliant cinematography, the camera leads us through harsh streets and darkened railroad cars and further into the chilling sewers of Chicago. The superb lighting casts an almost beautiful quality onto these scenes of devastation when the four men finally take a stand to do something. The performance level of this film is a fine example of true ensemble acting, and the execution of character development is both refreshing and transparent. Regrettably, violence, revenge, and foul language mar the film.