"Slice of Life in Ukraine" 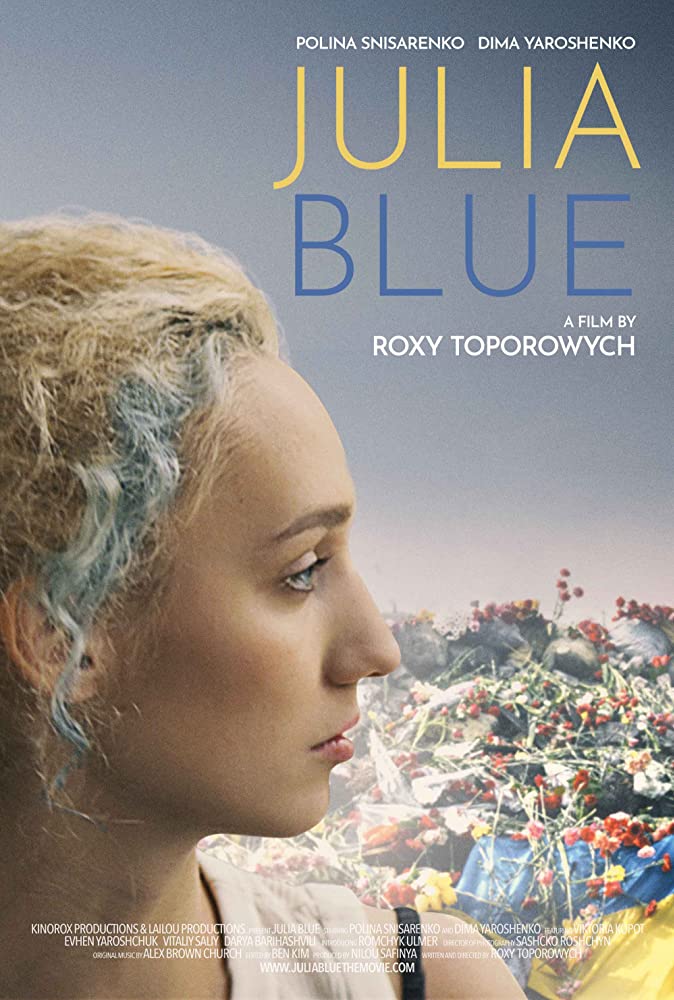 JULIA BLUE is a contemporary romance from the Ukraine about a young female photojournalist who is studying media at the university and volunteering at the military hospital. At the hospital, Julia falls in love with a soldier whose code name is English who has PTSD from fighting in the on-going Russian-Ukrainian war. Both Julia and English have fond memories of Ukraine’s revolution against communism when they were younger. However, when Julia gets into a prestigious German university, which may break up their budding romance.

JULIA BLUE is beautifully filmed, with superb acting. It appears very realistic. Like many European films, there are long lyrical moments that don’t develop the plot. JULIA BLUE has a  Ukrainian Orthodox Christian wedding, the Lord’s Prayer, a question from Julia’s sister about whether English is Christian or not, with a couple minor obscenities and a lingering jeopardy based on English’s PTSD. There’s a very strong nod to doing the right thing, overcoming following your heart. Those who love European movies will like the movie. Those who prefer action and adventure will find JULIA BLUE a little too lyrical.

(CCC, BBB, RoRo, L, V, A, M):
Dominant Worldview and Other Worldview Content/Elements:
Very Christian worldview with lots of morality, except for the burgeoning romance that does not seem to go beyond kissing but does contain a lot of Romantic situations as well as discussions of war, anti-communist revolution, with an emphasis on Ukrainian Orthodox Christian religion and marriage
Foul Language:
Two obscenities and no profanities
Violence:
Wounded soldiers in military hospital, flashbacks to war scenes, newsreel footage of scenes, but nothing excessive
Sex:
Very quick romantic liaison often with kissing and roommate discusses spending the evening making out
Nudity:
No nudity
Alcohol Use:
Social drinking, especially at wedding
Smoking and/or Drug Use and Abuse:
Lots of cigarette smoking but no illegal drugs, but medicine is shown; and,
Miscellaneous Immorality:
Soldiers have PTSD, soldier gets angry when woman comes up from behind him, strong withholding of information.

JULIA BLUE is a contemporary romance story from Ukraine about a young female photojournalist who’s studying media at the university and donating time to the military hospital, where she meets and falls in love with a soldier who goes by the code name “English” who has PTSD from fighting in the on-going Russian-Ukrainian war. Although the romantic relationship grows rapidly, JULIA BLUE is infused with overt and background Christian elements and worldview, including a strong moral heart.

Julia Blue tells the viewer she was born in 1991, the same year Ukraine finally got its independence from Russia. When she was a young teenager, she experienced the first Ukrainian revolution against statism, and then, in her early 20s, she participated in the second and was enthralled and excited about the whole country coming together to seek freedom (by the way, I lectured and preached in Kyiv, Ukraine during that second revolution).

With her do-good attitude, Julia volunteers in between classes in media studies at the university at the local military hospital. Russia invaded Ukraine and took Crimea with the warm water ports and Eastern Ukraine. (Russia, by the way, considers Crimea, as historically Russian {although in a treaty, Crimea was granted to Ukraine, but that same argument has fueled wars around the world with many other countries arguing for the return of their so-called historical lands. As far as Eastern Ukraine is concerned, the presence of many Russians is due to the starvation of 10 million Ukrainian by Russia in 1932-33 and then repopulated by Russian nationals.)

At the military hospital, Julia meets a tall, good-looking and very dour soldier named English whose real name is Vlad. English was fighting the Russians around his hometown in Eastern Ukraine, where he suffered a hand injury and PTSD after witnessing the death of one of his two best friends and of a little girl. English and Julia like each other immediately and both celebrate their favorite memories of the toppling of Lenin’s statues around Ukraine.

In their quick romance, which seems to only involve kissing, we see a quick charming travelogue portrait of Kyiv. When Julia returns to her home in the Carpathian Mountains to be the bridesmaid in a wedding, she brings English. Just before she leaves, she gets a letter saying she passed her German proficiency exam and was the first Ukrainian to get into a prestigious German university. She doesn’t tell English, however.

Staying in the quaint family home, the family becomes friendly with English as they participate in the Ukrainian Orthodox Christian wedding of her friend, but her former boyfriend is extremely jealous. So, the question becomes, will Julia go to university or will she marry English?

JULIA BLUE is beautifully filmed entirely in Ukraine, with superb acting. It appears very realistic. Like many European films, there are long lyrical moments that don’t develop the plot. These moments have no dialogue but lots of lyrical and romantic activity. The movie has a very traditional Ukrainian Christian wedding, the Lord’s Prayer, a question from Julia’s sister about whether English is Christian or not, with a couple minor obscenities and a lingering jeopardy based on English’s PTSD. There’s a very strong nod to doing the right thing, overriding following your heart.

Those who love European movies will like the movie. Those who prefer action and adventure will find it a little too lyrical.