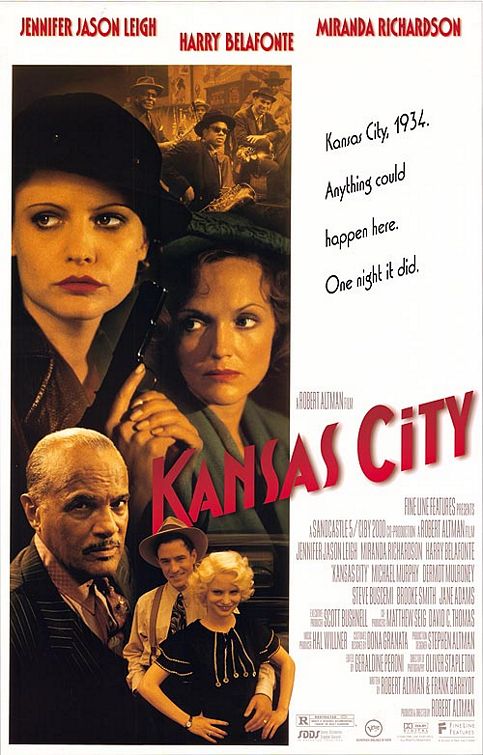 KANSAS CITY is the latest movie from Robert Altman. Set in the 1930's, it tells of a woman named Blondie who kidnaps a politician's wife, named Carolyn. The two woman develop a strange and unique relationship, and soon Carolyn begins to envy Blondie. Exact in its period replication, it is a dark and brooding movie that may be unpalatable for many audiences with its depiction of tough Jazz clubs in 1930's Kansas City.

Set during the 1934 elections, KANSAS CITY is a dark movie about a woman named Blondie who tries to rescue her thieving husband who has been caught in the act. She kidnaps Carolyn, the socialite wife of Democratic Party boss, Harry Stilton, to force him to intervene. Carolyn, soft, full of emotions and addicted to opium becomes attracted to Blondie’s ways. All hope appears lost for Blondie’s husband because Harry will not be back in Kansas City for some time. Blondie wires Harry to let him know that his wife is being held against her will. Harry returns to the astonishment of his wife, but with fatal consequences. At the conclusion, Carolyn chooses to courageously rise above her drug addiction to reestablish her relationship with her husband.

KANSAS CITY is a dark movie with a very cold feel to it. Altman was compelled to make this movie because he spent his childhood in Kansas City. The movie shows the lines that were clearly drawn between the white and black communities at the time of the 1934 election. This movie, with its dark somber tones and heavy themes, may only find a very small audience. With adult themes, some moderate violence and some scenes of the gambling Jazz Clubs, it is not a movie for children.