"A Kitten Comedy That Loiters in the Litter Box" 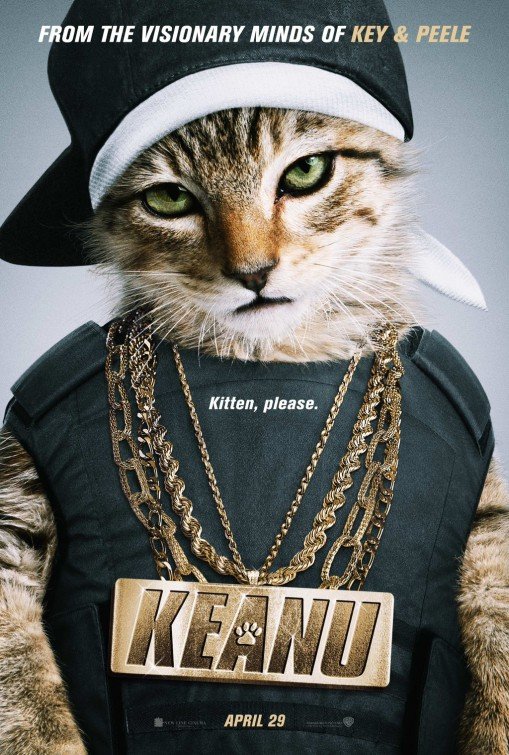 KEANU is a silly, often funny, but overly crude comedy about two full grown men, played by a couple popular comedians, going “full gangster” to rescue a cute kitten. In the movie, two straight-laced African-American men find themselves in the middle of a drug war when they want to save a cat and go home. The kitten is so adorable that he’s wanted by three different gangs!

KEANU has many hilarious moments. Purposefully over the top with big music and exaggerated action sequences, the movie isn’t to be taken too seriously, which makes it that much more charming. That said, the movie meanders quite a bit. It feels less like a story and more like several skits tied together. The message is ultimately against crime and breaking the law, and ends with the main characters even facing the consequences of their bad choices. However, the moral lessons are pretty weak. KEANU also includes a kitten-caboodle of foul language and lewd references. KEANU could have been much more accessible to younger viewers, but this kitten-friendly movie ultimately falls into the excessive category.

(B, C, LLL, VVV, S, NN, A, DDD, MM) Light moral worldview of obeying the law, helping your friends, and taking responsibility for poor choices, plus a drug battle takes place in an abandoned church; more than 125 obscenities (including at least 75 “f” words), nine profanities, and many uses of the “n” word; very strong violence includes multiple gun battles with people getting shot, blood splatter, man is stabbed, man flies through windshield and is ultimately hit by a car, man wears a necklace of fingers, man is half-swallowed by a python, two people lie about cutting off men’s genitalia; no explicit or depicted sexual content, but multiple references to sex, plus man’s wife becomes sex crazy when he becomes more aggressive in his personality, and married man is at a strip club to save cat and repeatedly closes his eyes when semi-nude strippers come up to him; several moments of upper female nudity in a strip club and some upper male nudity; alcohol use; heavy drug depiction, with multiple moments of smoking weed, using PCP and snorting crack; and, strong miscellaneous immorality includes breaking the law, lying and racial stereotypes.

In the movie, Clarence is a buttoned up suburban father and husband who’s getting ready for a weekend on his own when his wife and daughter head out on a quick weekend vacation. His idea of a good weekend includes mowing the lawn and paying bills, but his best friend, Rell, has other plans.

Rell, who recently got dumped, rescued a stray kitten that ended up on his doorstep. Falling head over heels for the cat, Rell has transformed into an overprotective kitten father. What Rell doesn’t know is that the kitten, whom he’s named Keanu, was formerly owned by a drug manufacturer killed by two street assassins in a massacre.

When Clarence and Rell go out to the movies and return to Rell’s home, they find someone broke into the house and, to Rell’s horror, stolen Keanu. It turns out that a gang known as the Blips (a mix between the Bloods and the Crips) trashed Rell’s home because they thought it was the home of a weed seller. Regardless, they stole Keanu.

Rell decides they need to get Keanu back, so he and Clarence go to the headquarters of the Blips. As soon as they get there, they realize how out of place they look and sound. So, in order to get Keanu back, they play the part of deadly gangsters, even though they drive in a minivan and listen to the tunes of George Michael.

KEANU has very hilarious moments, with Clarence and Rell being two fish out of water as straight-laced black men thrust into a violent gang culture, all for the sake of saving a kitten who’s so adorable, he’s wanted by three different gangs. The plot is reminiscent of Bill Murray’s THE MAN WHO KNEW TOO LITTLE, the main difference being that the characters are aware of their bad situation. Purposefully over the top cinematically with big music and exaggerated action sequences, the movie isn’t to be taken too seriously, which makes it that much more charming. That said, the movie meanders quite a bit. Thus, it feels less like a story and more like several skits tied together.

While the message is ultimately against crime and breaking the law, and ends with the main characters even facing the consequences of their bad choices, the moral lessons are pretty weak. With a kitten-caboodle of crude moments, abundant foul language, and scenes in strip clubs, this kitten-friendly movie could have been a bit more accessible to children. Ultimately, KEANU falls into the excessive category.